Just days before Christmas in 1958, some 14,000 Sudbury miners and their families got the news they had been praying for: the three-month strike at Inco was over. Mine, Mill, and Smelter Workers Local 598 president Mike Solski announced an agreement had been reached with Inco.

A three-year contract and a six-per-cent wage increase over three years was offered. This amounted to pennies on the hourly wage at the time of less than $3, but union leaders considered the settlement a victory.

They were here to train for their moon mission

This summer marks 50 years since NASA dispatched the Apollo 16 astronauts to Sudbury for field training ahead of their trip to the moon. Commander John Young and pilot Charles Duke, whose spacecraft would launch from Cape Canaveral less than a year later on April 16, 1972, teamed up with experts from Inco to study Sudbury’s impact crater and its unique geological structures.

NASA hoped that the field training, which took place from July 7 to 9, 1971, would prepare the astronauts for lunar surface experiments. It turns out, the excursion didn’t prepare them as much as they’d hoped.

“We were very interested, at the time, in trying to work up the geology of the moon. The great debate in the literature prior to our first moon landing was how much of the moon was formed by volcanic activity and how much of it was formed by impact structures,” said Michael Dence.

This 1930s black & white educational/promotional film tells “The Story of Nickel”. It was produced by INCO, the International Nickel Company, Ltd., now known as Vale Canada, Limited. INCO as founded following the discovery of copper deposits in Sudbury, Ontario. During World War II, Inco’s Frood-Stobie Mine Mine produced 40% of the nickel used in …

The famed writer came north on assignment for The Toronto Star, hoping to get the scoop on a coal deposit

Ernest Hemingway is a towering figure of 20th century American literature and his celebrated life is the subject of a recent excellent three-part Ken Burns/Lynn Novick documentary series on PBS.

Before his first novel was published, Hemingway was a reporter and it is often noted by biographers that he perfected his simple, unadorned style of writing during his days at The Toronto Star from 1920 to 1924.

Hemingway was just 20 when he started to freelance for The Star. In 1921, he went to Paris as the paper’s foreign correspondent. Between August and December 1923, he returned to Toronto and worked out of the King Street newsroom.

Award-winning Sudbury journalist and author Mick Lowe passed away peacefully at his home at Pioneer Manor this morning. Lowe, who was 73, died as a result of complications from a fall he suffered about three weeks ago.

He was born in Omaha, Nebraska, and immigrated to Canada in 1970 as a Vietnam War draft dodger. Lowe’s journalism has appeared in a range of publications such as Maclean’s, Canadian Business, Canadian Lawyer, the Globe and Mail and on CBC Radio.

Lowe is also a former editor of Northern Life, Sudbury.com’s predecessor publication, and the author of seven books (with another pending publication), as well as a former lecturer in Cambrian College’s now-defunct journalism program.

Notwithstanding the historical hype of the Klondike Gold Rush in Canadian society, the two most important mining events in our history are the discoveries of the Sudbury nickel mines in 1883 and the Cobalt silver boom of 1903.

Both were the result of railroads – the construction of the Canadian Pacific to British Columbia in Sudbury’s case and the building of the provincial Temiskaming and Northern Ontario Railway, going through Cobalt, which was for the colonization of northern Ontario.

But the similarities end there. Sudbury was built with U.S. capital and strategic technology. Cobalt was largely built and significantly financed by Canadian business and was the start of Canada’s global reputation as mine finders and builders. The two camps had much overlap but were also very distinct in their own rights.

Ohio-born businessman Samual J. Ritchie was the driving force who really started mining production in the Sudbury Basin with the founding of the Canadian Copper Company in 1886. A subsequent merger in 1902 with the New Jersey-based Orford Copper Company, which had the vital technology to separate the nickel from the copper in Sudbury’s complex ore, lead to the creation of the legendary International Nickel Company. (INCO)

Leo Gerard was 11 years old when he handed out his first union leaflets. That was in 1958, and he was living in Sudbury, a mining town. The leaflets were for the Mine Mill, the union his father belonged to.

What Gerard didn’t know then was that he would spend much of the rest of his life as a labour leader and activist. He began as a staff representative at the United Steelworkers (the USW) and moved quickly through the ranks. This summer, he retired as international president of the USW, a position he held for 18 years.

Gerard spoke to The Sunday Edition’s Michael Enright about his life in the labour movement and the future of unions in an age of globalized trade, a collapsing manufacturing sector and precarious employment.

It was 1977. The price of nickel was in the tank. INCO was warning about massive layoffs, and speculation about negotiations between the United Steelworkers union and INCO was that there would be no way to avoid a strike.

Financial analysts thought it would be a gift to INCO to go on strike because the price of nickel was so low and the stockpiles so high. The union didn’t go quietly. They embarked on one of the toughest and longest labour strikes in Canadian history. It was brutal. Sudbury suffered enormously. It was never the same.

The year before the strike of ’78, a group of community leaders, anticipating the brutal layoffs, began meeting informally about what could be done. They called the gathering ‘Sudbury 2001.’ 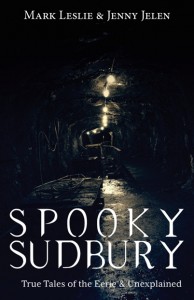 About 1.85 billion years ago, a giant rock collided with the earth, creating what we now know as the Sudbury Basin. This major geological structure is the third largest impact crater in the world, and one of the oldest that has been discovered to date.

The impact of the meteorite resulted in an impact melt sheet containing nickel, copper, platinum, palladium, gold, and other metals – which eventually turned Sudbury into one of the biggest mining communities in the world.

Because of this history, it’s not surprising that Sudbury’s greatest stories have always been about what comes from the sky and what lives in the ground.

Cathy Mulroy has always understood that well-behaved women seldom make history. In 1974, after becoming one of the first women hired in a non-traditional role at INCO since the Second World War, the Sudbury native, who stood at 5 feet 1 inch and weighed 105 pounds, was quickly labelled a troublemaker.

As a 19-year-old mother stuck in a toxic marriage, Mulroy signed up to work in the copper refinery in the anode department casting molten metal copper with the hope of earning enough to become financially independent.

She was often found guilty for the crime of sticking up for herself, and in Mulroy’s own words, she “never put up with crap.” Years later, after Mulroy retired, she decided to write a book about her experience using all the material she accumulated over the years. Mulroy documented everything, writing on cigarette packs, paper towels, and in diaries, collecting newspaper clippings, and more.

Mr. Gerard faced numerous headwinds as a labour leader. He has grappled with declining rates of union membership. He has taken on leaders of both U.S. political parties, whose free-trade orthodoxy collided with his members’ concerns about imports of steel and other products. And he has struggled with members of his own union who have little in common culturally with U.S. President Donald Trump, but are nonetheless drawn to the Manhattan tycoon because of his populist approach and his nationalistic rhetoric.

The discord roiled Mr. Gerard’s union and placed him in a difficult political position. He argued just after the Trump triumph that the new President was elected “by stealing our agenda.”

A scholarly article exploring the “tragedy of pollution in Sudbury” has earned its authors an award from the Ontario Historical Society.

The 2018 Riddell Award, acknowledging the best work on a subject of Ontario history in a given year, was recently presented to Mark Kuhlberg and Scott Miller for their article Protection to Sulphite Smoke Tortfeasors: The Tragedy of Pollution in Sudbury, Ontario, the World’s Nickel Capital, 1884-1927, which appeared in The Canadian Historical Review in June 2018.

A tortfeasor, by the way, is someone who commits a wrongful act, in this case applied to the mining companies that spread harmful emissions, but only because, as the article contends, it was permitted by provincial lawmakers at the time.

In the 1970s, the agency sent astronauts to northeastern Ontario to prepare for their trips to the moon — and helped drive the region’s scientific aspirations

SUDBURY — In 1971, astronauts John Young and Charles Duke loaded up with equipment —backpacks, radios, cameras — and walked along rocky ledges, communicating their movements as if to a home base.

Later that year, they’d do the same thing nearly 385,000 kilometres away as astronauts on the Apollo 16 moon mission. On this day, though, they were in the Sudbury Basin, practising for the real thing.

“Once they did their traverse, we would go over what they saw,” remembers Don Phipps, a local geologist who helped facilitate the training. “One of the objects of this visit is that when they got on the moon, they could report back with some kind of knowledge of what they saw on the ground.”

In 1974, Inco started hiring women for the first time since the end of the Second World War. Cathy Mulroy, then 19, was the second woman in line for a job. Now, she’s written a book about her experiences.

Mulroy worked on the anode casting wheel in the copper refinery. Her job was to empty the molten metal arriving in hot cars from the smelter, into the furnace. It was hot, grimy work, but for Mulroy, the labour wasn’t the difficult part of her experience.

“Over the years, I was kind of a person who believed in people’s rights,” she says. “I was never quiet. So right off the bat, I started getting into trouble.”

Electrician Gary Hrytsak was taking a brief nap during a coffee break at the Falconbridge smelter complex about 10:05 a.m. June 20, 1984, when he got thrown off the bench he was on.

“It was an eerie feeling,” recalled the now-retired Hrytsak during his speech at the 35th Workers’ Memorial Day ceremonies at the Caruso Club on Thursday. “You could feel things shaking under your feet … I thought the smelter had blown up.”

Hrytsak, who went on to do compensation, health and welfare work for his union (Mine Mill and Smelter Workers Local 598), said he put on his respirator, went to the electrical shop and telephoned his foreman, only to be told to stay where he was.