Few people would mistake Sudbury for Banff, and yet there is one spot just northwest of the city off MR 35 that I like to think of as our own little Lake Louise.

Easily spied on the west side of the road near the turnoff to William Day Construction, its surface is a vivid turquoise that has no doubt caught the attention of a few passing motorists other than myself.

It jumps out just as much, if not more, when you look at it from an aerial, satellite perspective in Google Maps, its hue so distinct from the other water bodies around it — more San Jose teal than Maple Leafs blue. END_OF_DOCUMENT_TOKEN_TO_BE_REPLACED

With two of Sudbury’s most important employers, Vale and Glencore, reporting healthy profits last week, we asked the Greater Sudbury Archives to dust off some old footage and photos from the earlier days of this fledgling industry, to give you a brief history of mining in Sudbury. END_OF_DOCUMENT_TOKEN_TO_BE_REPLACED

The man credited with making mining company Falconbridge Ltd. a success in the 1980s has passed away. William “Bill” James died on September 4, at the age of 89.

James took the helm of Falconbridge at a time when the company was losing millions of dollars each week due to flagging metal prices. He cut jobs and corporate spending, eventually making the company an attractive target for a takeover for Noranda.

Ed Thompson, a board member with the Canadian Mining Hall of Fame, remembers working with James for almost 50 years. “He was a very forthright, honest man,” Thompson recalled. END_OF_DOCUMENT_TOKEN_TO_BE_REPLACED

During the second half of the 1910s the problem of sulphur smoke in Sudbury, Ontario, pitted farmers against the mining-smelting industry that comprised the dominant sector of the local economy. Increased demand for nickel from World War I had resulted in expanded activities in the nearby Copper Cliff and O’Donnell roast
yards, which in turn produced more smoke and destroyed crops.

Local business leaders, represented by the Sudbury Board of Trade, sought to balance the needs of the agriculture and mining-smelting sectors and facilitate their coexistence in the region. Among the measures pursued, farmers and some Board of Trade members turned to nuisance litigation, with the objective of obtaining monetary awards and injunctions affecting the operation of the roast yards.

While the amounts of the awards were disappointing for the farmers, the spectre of an injunction was sufficient to convince the provincial government to ban civil litigation in favour of an arbitration process accommodating industry. This article provides an account of the political activism over Sudbury’s smoke nuisance that failed to bring about emission controls, highlighting the contextual factors contributing to this failure. END_OF_DOCUMENT_TOKEN_TO_BE_REPLACED

Prepare to delve into the heart and history of Northern Ontario this week during Pat The Dog’s sixth annual Playsmelter Festival. Featuring creators from the region and afar, Playsmelter offers audiences the chance to see Canadian theatre in all stages of development. The festival, which features Sudbury-inspired narratives, starts today and runs until Saturday at the Sudbury Theatre Centre.

Adric Cluff usually writes about zombies and vampires, yet penning a play based on American inventor Thomas Edison and his influence in Sudbury at the turn of the 20th century was more extraordinary than any fiction he ever encountered.

Cluff explores the famous inventor’s visit to the Sudbury region in the early 1900s, his mining exploration and influence on the founding of Inco Limited. Cluff dug into the city’s archives and found plenty of supporting evidence of the inventor’s influence at the time, including an invitation from the mayor to visit the booming mining town. END_OF_DOCUMENT_TOKEN_TO_BE_REPLACED

Going green has many benefits, especially when it results in significant cost savings ranging in the millions. Vale will save about $6 million by recycling most of the scrap metal that will be left over once the Copper Cliff iron ore recovery plant is demolished.

The original price tag was just over $8 million, but the contractor who will demolish the facility will take the scrap metal for recycling purposes, cutting the cost down to just over $2 million, said Angie Robson, spokesperson for Vale.

Demolition work began in August 2017 and it will be completed by the end of this year, she said. The plant operated from the mid-1950s until the mid-1980s. END_OF_DOCUMENT_TOKEN_TO_BE_REPLACED 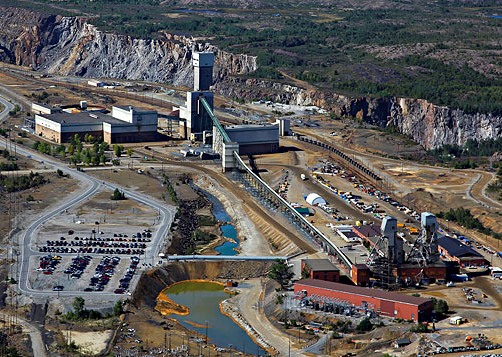 Stobie Mine was an important mine in Greater Sudbury’s mining history,
with an estimated 58,000 people working there over the years. During
the Second World War, the mine produced an estimated 40 per cent of the
Allied Forces’ nickel needs late in the war.

The final day of production at a 130-year-old mining complex in Sudbury on Tuesday was both a cause for celebration and a sombre moment to reflect. For 28-and-a-half-year loader /operator Wayne Beckerleg, it was the latter.

“I love this place,” said Beckerleg, who became emotional at times addressing a crowd of more than 350 co-workers, retirees, dignitaries and others at a press conference on the Stobie Mine property in New Sudbury. “We have always put our heads together, found ways to overcome, do a lot of risk analysis, found safer ways for people who came after us. 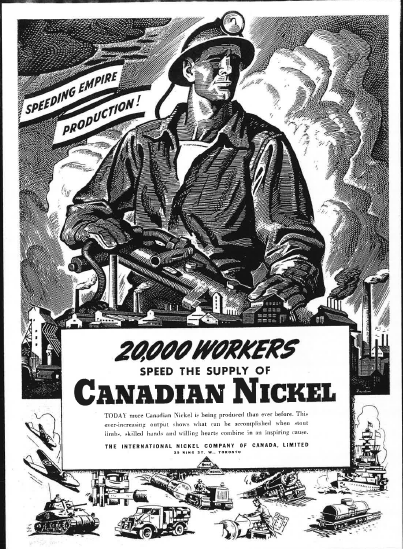 “Stobie Mine: it’s like no other mine. It’s like my second family home. You’re all like brothers and sisters here. I have enjoyed the friendships over the years … At one time, we were doing 10,000 tons of muck a day. It’d be down now. That’s real estate. That is the hand we are being dealt … You have my respect. I hope we will meet again. We will meet again.” END_OF_DOCUMENT_TOKEN_TO_BE_REPLACED

Given it’s a part of the city’s recent history, most Sudburians remember Steelworkers Local 6500’s nearly year-long 2009-2010 strike against Vale. More distant in the community’s collective memory is the arguably even more bitter labour dispute that happened a generation earlier.

Steelworkers Local 6500 went on strike against Vale’s predecessor, Inco, for 10 and a half months from Sept. 15, 1978 until June 7, 1979. The labour dispute, which involved 11,600 workers, and starved Inco of more than 22 million hours of labour, smashed records at the time for the longest strike in Canadian history.

The impact on the Sudbury community was devastating, with businesses closing, marriages breaking up and families losing their life savings. The 1978-1979 Steelworkers strike is the subject of local author Mick Lowe’s latest novel, “Wintersong.” It’s the third in the Nickel Range Trilogy fiction series, which focuses on Sudbury’s mining history. END_OF_DOCUMENT_TOKEN_TO_BE_REPLACED

Earlier this week, mining giant Vale made headlines when it announced that, beginning in the year 2020, it will decommission and dismantle the Superstack and replace it with two smaller stacks.

The 381-metre smokestack, the second tallest in the world, has been an iconic symbol of Sudbury since the 1970s and, on our website, many readers expressed their sadness that the towering chimney may soon vanish from the landscape. END_OF_DOCUMENT_TOKEN_TO_BE_REPLACED 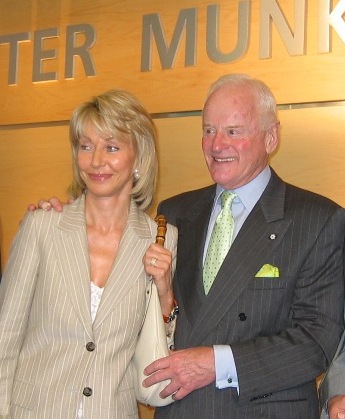 An edited version of this list was published in the February/March issue of the Canadian Mining Journal.

A few months ago, my dear colleague Joe Martin, who is the Director of the Canadian Business & Financial History Initiative at Rotman and President Emeritus of Canada’s History Society, asked me a very simple question: who would be considered the most important individual in Canadian mining?

Considering Canada’s lengthy and exceptional expertise in the mineral sector, it was not an easy answer and I decided to research and create a top ten list of the most important mining men in Canadian history.

The lack of women on this list simply reflects the fact that for much of our history most women were not given the educational or social opportunities to excel in business, especially in a rough and male-dominated sector like mining. Times have changed, women are playing key roles in mining today and will definitely be included on this list in the future.

However, a few qualifiers need to be established. This is basically a list of mine builders not mine finders.  Building a company through takeovers and discoveries is one way but I am also focusing on individuals who have built corporate empires and/or who have developed isolated regions of the country with the necessary infrastructure for mines to flourish and create multi-generational jobs, shareholder wealth and great economic impact. END_OF_DOCUMENT_TOKEN_TO_BE_REPLACED

Sudburians who came together last month to celebrate an iconic musician and one of his most iconic songs now have their own music video.

Downtown Sudbury, the Townehouse Tavern and local businessman Colin Firth unveiled Sudbury Celebrates Stompin’ Tom at the Townhouse on Saturday night. The video includes a spirited rendition of Sudbury Saturday Night, performed by a boisterous crowd that gathered on Grey Street, near the bronze statue of the late Stompin’ Tom Connors, on Sept. 24.

It also includes commentary from Tannys Laughren, who was a member of the Stompin’ Tom statue committee; Paul Loewenberg, manager at the Townehouse; and Firth, a driving force behind the community event last month. “It was a couple months of getting it all together and we finished up the final video just in the last day or so, and I’m very excited,” Firth said, a few hours before the video’s premiere. END_OF_DOCUMENT_TOKEN_TO_BE_REPLACED

Scott Hand, chairman of RNC Minerals, was CEO of nickel giant Inco when the Canadian miner was taken over by Vale in 2006. Inco’s failure to merge with rival Falconbridge had already shattered dreams of creating a Canadian mining colossus. The former Inco chief recalls the lack of government support for that made-in-Canada solution, and contrasts the case to the blocking of a PotashCorp takeover in 2010.

We were joined on our Commodities show today by former Inco CEO Scott Hand, who looked back 10 years to 2006 when the nickel miner agreed to a takeover by Brazil’s Vale. That came just weeks after Falconbridge, Inco’s fellow Canadian nickel giant, was taken over by Xstrata.

Ten years ago, Canadian mining giants Inco and Falconbridge went into foreign hands. Independent mining analyst Ray Goldie, author of the book Inco Comes to Labrador, says Ontario could have done more to keep the head offices in this country.

Ten years ago this Saturday, a global mining gem slipped out of Canadian fingers. In 2006, Canadian nickel miner Inco agreed to be bought by Brazil’s Vale in a $19-billion takeover. The announcement of the acquisition came just weeks after fellow nickel giant Falconbridge was acquired by Xstrata of Switzerland (now part of Glencore) in an $18-billion deal. The previous year, Falconbridge had combined with another Canadian mineral giant, Noranda.

The Inco sale “further undermines Canada’s status as a force in the mining industry,” the New York Times proclaimed at the time of the acquisition.

The two takeovers rankled because both Inco and Falconbridge sat atop a mineral lode in in Sudbury, Ont., which is among one of the greatest deposits on Earth. Vale itself calls the northern Ontario city “the mining capital of the world,” adding that its operations there “are among our largest on the planet, employing approximately 4,000 people.” END_OF_DOCUMENT_TOKEN_TO_BE_REPLACED

The music video will be shot on Grey Street, outside of The Townehouse Tavern (on the lower roof level), the location where Stompin’ Tom wrote and first performed his legendary song about our hometown.

“Sudbury Celebrates Stompin’ Tom” is a joint effort between The Townehouse Tavern, Downtown Sudbury and local businessman Colin Firth. Collectively, the group’s members believe it is time that Sudbury got together to celebrate Stompin’ Tom Connors to say thanks to the legendary Canadian icon by singing his famous song “Sudbury Saturday Night.” END_OF_DOCUMENT_TOKEN_TO_BE_REPLACED