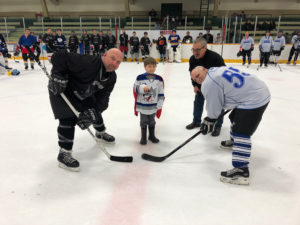 “Cancer is one of the leading cause of death by disease for children in Canada,” said Wayne Tonelli, Miners for Cancer President. “If we can help even one child’s chances of survival with our fundraising efforts, all the hard work behind our events is worth it.”

KIRKLAND LAKE, ONT. — It is a scene that could grace the back of the five-dollar bill. Youngsters are playing hockey outdoors, the sounds so familiar – skates scraping over ice, sticks striking pucks, a barking dog – that they even include the winter call of the Canadian mother, once so common now so rare.

It is, instead, a diorama represented what once was, the roots of a game so important to this small Northern Ontario community that Kirkland Lake even has its own impressive Hall of Fame – Hockey Heritage North – that celebrates what Foster Hewitt once called “The town that made the NHL famous.”

It is registration week in Kirkland Lake, Ont., that time of year when the town’s youngsters sign up for a sport that once defined Kirkland Lake every bit as much as the gold the various mines pulled from the quartz and faults of this dense northern bush. END_OF_DOCUMENT_TOKEN_TO_BE_REPLACED

HOUGHTON, Mich. — Hockey rules this remote part of Michigan’s Upper Peninsula, where it is played by everyone from children to those in their 70s and 80s. All through the long winter it is always game on — in modern arenas, outside (into the wee hours of the night) and in two of the oldest hockey rinks in the world.

Professional hockey was born here in Copper Country in 1902, 15 years before the N.H.L. was formed. Even before that, the game was king in Houghton, Hancock, Calumet and nearby towns when they were at the center of a mining boom.

The mining is gone, the woods dotted with abandoned buildings and ghost towns. Only about 44,000 live in the area now, but the love affair with hockey endures. And the Michigan Tech Huskies are winning again, at last. END_OF_DOCUMENT_TOKEN_TO_BE_REPLACED

Karen Bachmann is the curator/director of the Timmins Museum and a writer of local history.

TIMMINS – As you probably know (or maybe you never really thought about it), I don’t usually write about sports – I am smart enough to leave that to the professionals.

By no stretch of anyone’s imagination can I be considered a “sports person”. I know the very basics, have favourite teams (a Habs fan from time immemorial, and I follow Premier League soccer), but I am in no way equipped to conduct a semi-intelligent conversation on the finer points of the game – or any contest, match, bout or derby, for that matter.

Come to think of it, I cannot fully appreciate some of those sports discussions which invariably feature the minute deconstruction of a player’s performance and style, which, I am sorry to say, just sounds an awful lot like “man gossip” to me, but what do I know? END_OF_DOCUMENT_TOKEN_TO_BE_REPLACED

Karen Bachmann is the curator/director of the Timmins Museum and a writer of local history.

TIMMINS – In honour of Hometown Hockey Weekend here in Timmins, I feel that I have to go back and look at an article I wrote a while ago on the McIntyre Arena (home to Hometown Hockey, as it were, this weekend!).

While there is a lot of discussion out there about the arena itself, you cannot deny that it is our very own temple to the game.

Talk about history – it’s the rink that was home to many legendary local hockey teams (and quite a few NHLers to boot, including the Mahovlich brothers, Bill Barilko, Paul Harrison, Allan Stanley, Dean Prentice, Murray Costello and his brother Les, Steve Sullivan and so many others), as well as the headquarters for the world-famous Schumacher Skating School.

It’s also hosted umpteen concerts, circuses, conferences, trade shows, banquets and horticultural shows. It has been used to say goodbye to prominent citizens (Father Les Costello), and to ordain our local Catholic bishops. I would go even so far as to say that “The Mac” is a building that helps define who we are as residents in this city. Without it, we would be very much poorer. END_OF_DOCUMENT_TOKEN_TO_BE_REPLACED

“You could say, without exaggerating, that Bickell was the cornerstone of the whole project.” – Conn Smythe on Bickell’s role in the construction of Maple Leaf Gardens

Most follow one path, but John Paris Bickell commanded several successful careers during his extraordinary life. He opened a brokerage firm at the age of 23 and was a millionaire by 30. In 1919, he left the investment business to become president and, later, chairman of McIntyre-Porcupine Mines, one of Ontario’s first and most important gold producers.

Bickell’s achievements went beyond the realm of business, as he had a keen sense of civic duty. During the Second World War, he was appointed by Lord Beaverbrook to Britain’s Ministry of Aircraft Production, where he served with the airplane supply board during the blitz. Upon his return to Canada, he assumed responsibility for Victory Aircraft, the federal agency that manufactured Lancaster bombers for the Royal Canadian Air Force. END_OF_DOCUMENT_TOKEN_TO_BE_REPLACED