LOGAR, Afghanistan — Somewhere in the Logar Mountains, overlooking the highway to Kabul, Asadullah Massoud trudged up to a four-story-tall cleft. Before him was a monochromatic pattern of gray stone, save for a seam of dull, almost-black rocks. “Look there. See that black line?” he said. “That’s chromite.”

An explosion thumped in the distance. Massoud looked up at the sound, but appeared unconcerned. That’s not fighting. We’re mining with the open-surface method, putting explosives and going from hill to hill,” he said.

South Africa is the world’s biggest producer of chrome ore and it is estimated that about 10% of South Africa’s yearly production of chrome is lost to illegal mining. There has been an emergence of a bulk commodity illegal industry in South African chrome mining, said global law enforcement network organisation the Global Initiative Against Transnational Organised Crime (GI-TOC) in its latest Risk Bulletin report.

According to the report, soldiers, police and security guards in April descended on a mine in North West to disrupt a large illegal mining operation. The miners had been excavating chrome ore, which is an essential mineral for manufacturing stainless steel.

Russian gas and oil are by far the most significant exports Moscow sells to Germany. Yet other important raw materials are also under the spotlight because of the war in Ukraine.

Almost all the debate surrounding Germany’s economic ties with Russia since the invasion of Ukraine has focused on gas and oil. With good reason — Germany buys more Russian oil and gas than any other European country, making energy Russia’s most lucrative import to Germany by far.

However, many German companies rely on a steady supply of other Russian exports, particularly raw materials such as nickel, palladium, copper and chromium.

On Tuesday, Kazakhstan President Kassym-Jomart Tokayev ordered his government to levy higher taxes on mining companies within Kazakhstan. In a speech to parliament, Tokayev stated: “The income of firms in the mining sector has grown against the backdrop of higher prices for raw materials.”

The boom in income for miners came after prices of industrial metals surged in the last year. The Central Asian state holds vast mineral reserves, possessing 30% of the world’s chrome ore reserves, 25% of manganese ore, 10% of iron ore, 5.5% of copper, 10% of lead, and 13% of zinc, according to official estimates. 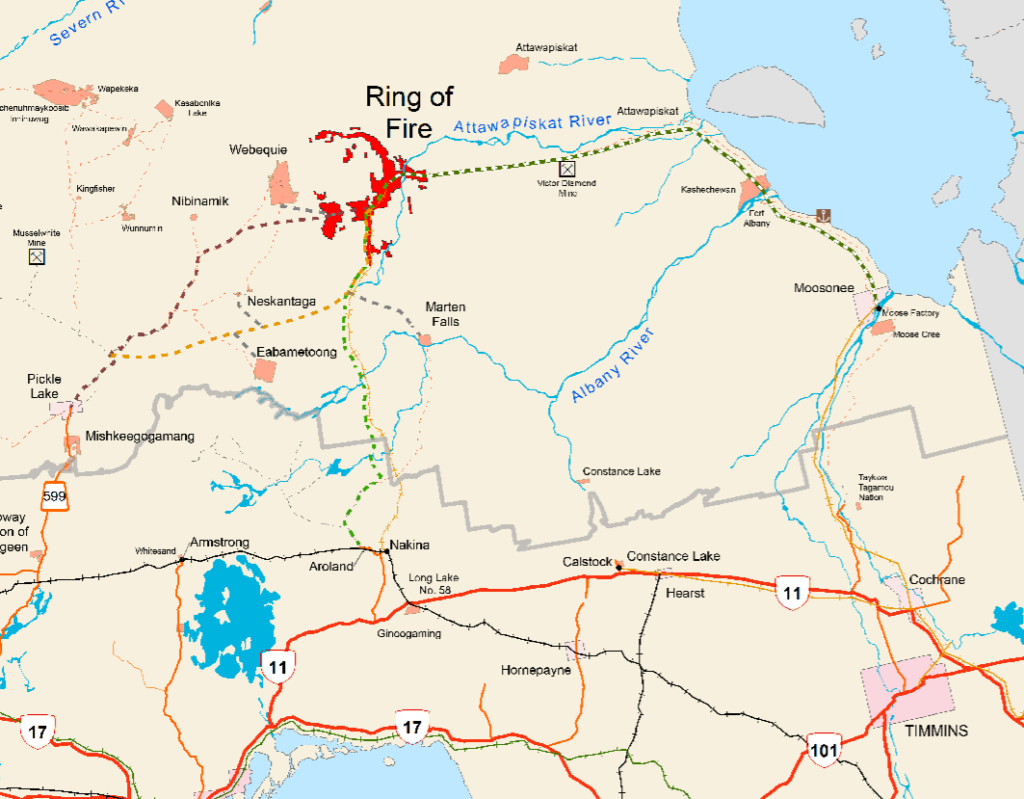 Backed by Australian billionaire Andrew Forrest, Wyloo first proposed buying Toronto-based Noront in May for 31.5 cents a share. Melbourne-based BHP, the world’s biggest mining company, upped the ante with a 55-cents-a-share bid in July, and Noront’s board supported it. But Wyloo came back in late August, offering 70 cents a share.

Wyloo Metals has tabled a “superior” offer over BHP’s in the bidding war to acquire Ring of Fire junior miner Noront Resources.

Wyloo, a Western Australian-based mine developer, announced it has reached an agreement with the Toronto company to acquire its nickel, copper, platinum group metals and chromite assets in the James Bay region.

The thunder from down under has been reverberating through Ontario’s Ring of Fire mining camp – located roughly 500 kms northeast of Thunder Bay – as Australian mining giants BHP and Wyloo Metals are fighting a bruising bidding war for Noront Resources. The junior exploration company owns the Eagle’s Nest nickel/copper potential mine as well as extensive world-class chromite deposits and other mineral-rich promising ground.

BHP is the largest mining company in the world, whose current CEO, Mike Henry, is a Canadian, while Wyloo Metals is owned by Fortescue Metals, founded by mining billionaire Andrew ‘Twiggy’ Forrest, and is the world’s fourth largest iron ore miner.

“Noront’s ROF land package hosts some of the most prospective mineral deposits in the world. These deposits have the potential to become Canada’s next great mineral district, supporting the production of future-facing commodities for multiple generations”, claimed a Wyloo Metals news release in August.

The entry of multi-billion-dollar mining corporations signals a proverbial “game-change” in the stalled Ring of Fire mining camp. Noront Resource was a struggling junior company that did manage to consolidate almost half of the valuable mineral claims in the camp but did not have the funds to do significant further exploration or to build their existing mine. Newly established and well-funded explorer Juno Corporation is the largest claim holder who after extensive aerial geo-physics surveys that showcased promising anomalies, is hoping to add to future discoveries.

Please note that this article is from April 2014 – Stan Sudol

Located 500 kilometres northeast of Thunder Bay, the Ring of Fire mining camp contains billions worth of chromite — among the best deposits in the world — plus nickel, copper, platinum group elements, gold, zinc and vanadium.

In 2007, an interesting mix of six geologists and junior mining executives – Richard Nemis, Mac Watson, Neil Novack, John Harvey and Don Hoy — collectively found the most significant mineral discovery in Canada since the Sudbury Basin in 1883 and the Timmins gold camp in 1909.

JOHANNESBURG (miningweekly.com) – The imposition of a tax on the export of chrome ore would be high risk and the gain from such an intervention would likely be eroded fairly quickly by the high cost of electricity, which is the real problem.

Ask Alan Coutts what’s to become of a proposed ferrochrome processing plant for Sault Ste. Marie and the president of Noront Resources gives a straightaway answer.

“That will ultimately be a question that will be answered by the new owners.” Noront selected Sault Ste. Marie in 2019 is its preferred location for a high-tech smelting operation, settling on a brownfield site at Algoma Steel.

Wyloo Metals Pty Ltd. has bumped up its offer for Noront Resources Ltd., trumping BHP Group Ltd.’s bid, and in a highly unusual move is proposing to keep the struggling Ring of Fire exploration company as a publicly traded entity.

Since May, Toronto-based Noront has been the subject of a takeover tussle between Australian private equity firm Wyloo and BHP, the world’s biggest mining company, which is also based in Australia.

Both are extremely well funded. BHP’s market valuation is US$165-billion. Wyloo is backed by Andrew Forrest, founder and chair of Fortescue Metals Group, and one of the richest individuals in Australia.

In response to Mining Weekly during a media conference following the company’s presentation of record half-year results, Nagle highlighted ferrochrome’s good fortune as being driven by the very strong global production of stainless steel, in which it is a key ingredient.

Fiscal stimulus has boosted demand for white goods and the like, and stainless steel and its ferrochrome twin have provided the necessary innards to meet that demand.

HARARE, Aug 3 (Reuters) – Zimbabwe has banned the export of raw chrome with immediate effect in a bid to support the domestic ferrochrome industry, minister of information Monica Mutsvangwa said on Tuesday.

Mutsvangwa told reporters after a cabinet meeting that Zimbabwe had 22 operating chrome smelters, which could soon face insufficient feedstock if chrome mining capacity did not increase.

SOUTH Africa’s chrome ore industry has failed in its attempt to win an exemption from the Competition Commission that would have enabled it to discuss alternatives to an export tax controversially proposed by Cabinet last year.

The export tax is intended to boost the country’s ferrochrome industry which uses chrome ore supply. However, ChromeSA says it will only have short-term benefits and could potentially backfire in the long run.

It argues that alternative chrome ore producers have an excess supply that could be brought to bear in the wake of uncompetitive South African material. The majority of South African chrome ore exports are to China which it uses for its own ferrochrome sector.