In spite of the warnings that Northern Ontario would die “as soon as the ore runs out,” in my heart I always rejected that feeling of impermanence. The Pollyanna in me thinks there is still a bright future on the horizon.

In 1903, silver deposits were discovered in Cobalt. It was likely the most significant event in the history of Northern Ontario. At that time, the area was uninhabited wilderness.

By 1910, more than 3,000 men were employed in underground mining; the population of the town was 6,000 and nearby Haileybury had a population of 5,000. Depending on various sources, there were between 38 mines and/or 100 mines or mining companies in the Cobalt area. END_OF_DOCUMENT_TOKEN_TO_BE_REPLACED

Pandemic-related challenges faced by the Kirkland Lake Gold team in 2020 have left the big boss suitably impressed. In reflecting on the past year, president-CEO Tony Makuch was pleased with the “solid results” in gold production in releasing the company’s fourth-quarter and full-year results.

The Toronto-headquartered gold miner reported all three of its cornerstone mines at Macassa and Detour Lake in northeastern Ontario, and Fosterville in Australia, achieved their highest production rates in the last quarter of 2020.

“Looking at our operating performance, in many respects our team had its best year ever in 2020,” said Makuch in a Jan. 12 news release. END_OF_DOCUMENT_TOKEN_TO_BE_REPLACED

Kirkland Lake Gold views Timmins as an integral part of the company’s future according to its president and chief executive officer Tony Makuch.

Makuch, a native of Timmins, has more than 30 years of experience as a mining engineer. He joined KL Gold in July 2016. Before that, he was the CEO of Lake Shore Gold from 2008 until 2016, when it was acquired by Tahoe Resources.

This past week, he was the guest speaker for the latest edition of The State of Mining — a series of discussions hosted by the Timmins Chamber of Commerce over the video conferencing platform Zoom. END_OF_DOCUMENT_TOKEN_TO_BE_REPLACED

The Kirkland Lake area remains hot property for many junior miners drilling or acquiring property in the Abitibi region of northeastern Ontario. Meanwhile a cobalt plant developer is finetuning its strategy to bring a mothballed refinery back into production in the Temiskaming area.

The plan is to explore multiple target areas on the property with the first holes going in near the former Baldwin Mine, where historical production yielded gold grades of 15 grams per tonne. END_OF_DOCUMENT_TOKEN_TO_BE_REPLACED

Gold production in Ontario in Q2 2020 declined by 17% over Q2 2019 due to suspensions related to COVID-19 crisis. Detour Lake was the largest gold mine in Ontario.

Ontario is the largest gold-producing Canadian province or territory. According to the Ontario Mining Association, the region produced 73,733 kilograms of gold in 2019, which equates to 2,371 thousand troy ounces of gold, or 42% of total gold produced in Canada.

Based on available quarterly corporate reports, Ontario produced 528 kozt of gold in Q2 2020 from primary gold mines and as a by-product of base metals and platinum group metals operations. This significant 17% decline over the corresponding period of 2019 (638 kozt) was primarily caused by suspensions related to COVID-19 crisis. END_OF_DOCUMENT_TOKEN_TO_BE_REPLACED

The Toronto-headquartered mining company released drill results from its exploration program in Kirkland Lake where the focus is on growing gold reserves at its South Mine Complex and finding more high-grade gold further out and deeper down along the unexplored zones around the Amalgamated Break.

In an Oct. 19 news release, the company said it’s seeing “extremely high-grade intersections” from its program to extend the South Mine Complex to the east and west, in identifying high-grade mineralization along the Amalgamated Break, and in identifying a new, high-grade corridor along Main Break near the location of its new No. 4 shaft. END_OF_DOCUMENT_TOKEN_TO_BE_REPLACED

Gatling Resources has connected three high-grade deposits at its Larder Gold Project in northeastern Ontario, and can prove it’s all part of one large mineralized system.

The Vancouver junior miner claims it has successfully drilled gold mineralization between its Fernland and Cheminis deposits.

Gatling Exploration contracts Windfall Geotek to dig through the data

Artificial intelligence (AI) will play a role in helping Gatling Exploration chase down some gold targets near the established mining camp of Kirkland Lake.

Gatling said in a July 30 release that the targets will be evaluated and then explored using more traditional exploration techniques. END_OF_DOCUMENT_TOKEN_TO_BE_REPLACED 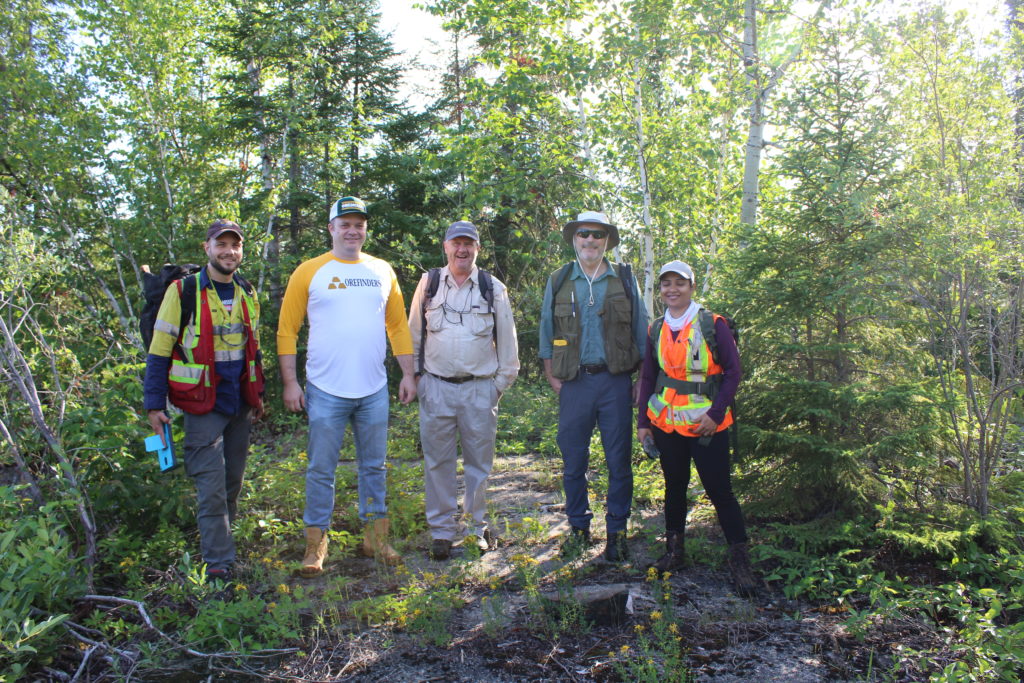 Who says mining is not sustainable? The recent announcement by IAMGOLD to start building a Cda $2 billion Cote Lake open-pit gold mine 140 km north of Sudbury — which will employ 1,000 workers during peak construction and roughly 450 full-time middle-class jobs — is welcome news. The mine life is expected to be around 18 years; however, ongoing exploration may extend the life of mine.

Vale’s Creighton Mine, which started production in 1901, is still going strong 8,000 feet below the surface. The deeper the company goes, the richer the nickel/copper and PGM content of the ore gets.

Kirkland Lake’s Macassa gold mine started production in 1933. With new discoveries at deeper levels and a roughly $320 million investment for a new mine shaft, Kirkland Lake Gold’s CEO Tony Makuch is extending the mine’s life for another 30 to 40 years. END_OF_DOCUMENT_TOKEN_TO_BE_REPLACED

Who says mining is not sustainable? The recent announcement by IAMGOLD to start building a C$2 billion Cote Lake open pit gold mine 140 km north of Sudbury which will employ 1,000 workers during peak construction and roughly 450 full-time middle-class jobs is welcome news. The mine life is expected to be around 18 years, however, ongoing exploration may extend the life of mine.

Vale’s Creighton mine which started production in 1901, is still going strong 8,000 feet below surface. The deeper the company goes, the richer the nickel/copper and PGM content of the ore gets. Kirkland Lake’s Macassa gold mine started production in 1933. With new discoveries at deeper levels and a roughly $320 million investment for a new mine shaft, Kirkland Lake Gold’s CEO Tony Makuch is extending the mine’s life for another 30 to 40 years!

Northern Ontario’s mining camps have seen many mines whose lifespans have lasted 50 years or much longer while hundreds of others with shorter operations have still provided tens of thousands of jobs and billions in economic activity for the Ontario economy over the past century.

Meanwhile car manufacturing at Oshawa’s General Motors plant started in 1907 and unfortunately closed in 2018, dealing a devastating blow to southern Ontario’s auto-focused economy. Similarly, in 2011, Ford Motor Company permanently closed its St. Thomas assembly plant that opened in 1967. Now there are rumour’s that Ford may be closing its giant auto assembly plant in Oakville. END_OF_DOCUMENT_TOKEN_TO_BE_REPLACED 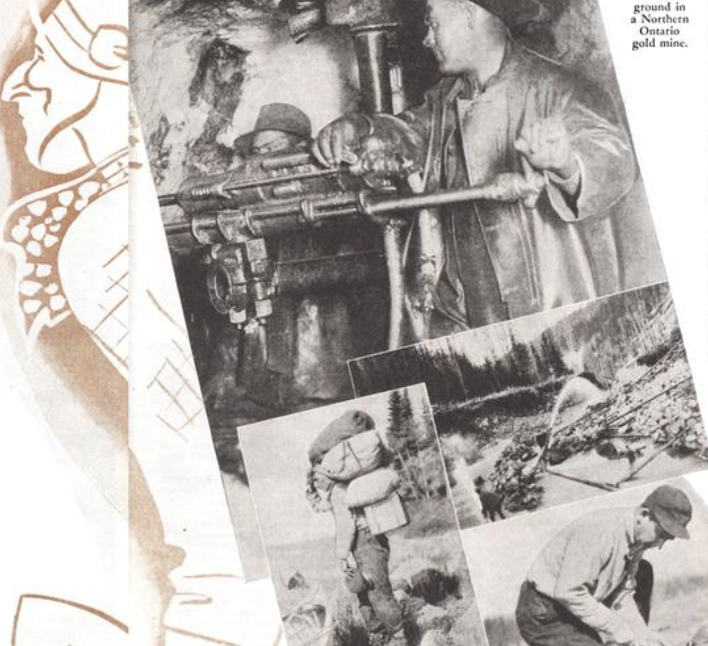 Men still speak of the Cariboo Trail and the Klondyke Trail. There can be no such convenient designation for the scene of this year’s great gold trek unless one refers in a general way to the ‘Trails of ’34. Because the scene is all Canada, and the trails lead to new fields and old. The effort is not concentrated upon a single area. The stage is so wide, so crowded with effects that the term “rush” may seem at first glance a misnomer. And yet from Nova Scotia to British Columbia, across the whole breadth of the Dominion, one of the greatest gold treks of all time is in full swing. END_OF_DOCUMENT_TOKEN_TO_BE_REPLACED

Mistango River Resources (CNSX: MIS) has developed a geological model for its 34-sq.-km Eby-Baldwin project, located 10 km west of Kirkland Lake in the historic “Mile of Gold” of the Kirkland Lake district in Ontario.

The model considers Eby-Baldwin in the broader context of the Kirkland Lake district and how the project relates to the adjacent Macassa mine owned by Kirkland Lake Gold (TSX: KL; NYSE: KL).

The company has been acquiring parcels of land in the area for some time and recently purchased two additional landholdings, the most significant of which is the 21 sq. km Teck-Kirkland property, purchased from Hinterland Metals (TSX: HMI). The acquisition in late March effectively doubled the size of the Elby-Baldwin project. END_OF_DOCUMENT_TOKEN_TO_BE_REPLACED

Its ramifications are international. Stolen Canadian gold usually winds up in the free world market in Paris or is sold privately in Central Europe or the Middle East at $40 an ounce. Three years ago (before Russia flooded the market) the price hit $100. END_OF_DOCUMENT_TOKEN_TO_BE_REPLACED

Vancouver’s Gatling Exploration reported its highest grade of gold to date coming out of an ongoing exploration program at its Larder Lake Gold Project.

The company has been running an aggressive campaign since last September in establishing a mineral connection between three gold deposits on its property, 35 kilometres east of Kirkland Lake. END_OF_DOCUMENT_TOKEN_TO_BE_REPLACED

The Toronto-based gold miner, whose high-grade mines in Canada and Australia produced 974,615 oz. of the precious metal last year, is investing $1 million in a non-brokered private placement for up to 1.25 million units of Melkior at 80¢ per unit, giving it a 9.9% stake in the junior on a fully-dilutive basis.

“We are extremely proud to announce this landmark equity investment and potential joint-venture agreement with one of the world’s most respected gold mining companies,” Jonathon Deluce, CEO of Melkior Resources, said in a May 20 press release. END_OF_DOCUMENT_TOKEN_TO_BE_REPLACED