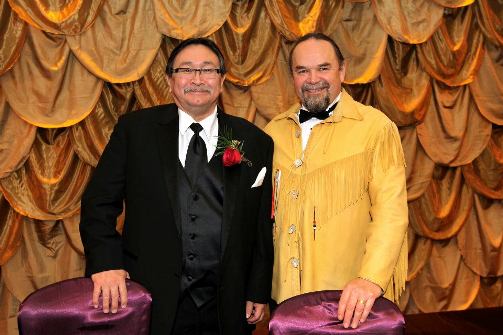 (L to R) Charlie Lyall, the former president of the Kitikmeot Corp.; Glenn Nolan, incoming President of the Prospectors and Developers Association of Canada

Skookum Jim Award for Aboriginal achievement in the mineral industry

This year’s award is being presented to the Nuna Group of Companies for providing mining and construction services to mining companies in northern Canada and training and employment opportunities for Aboriginal People in the North. Nuna was formed in 1993 and is 51% Inuit-owned [Nunasi Corporation (25.5%); Kitikmeot Corporation (25.5%); and Nuna Management (49%)].

Sharing the economic benefits of the business with Inuit, Aboriginal People, and northerners has resulted in the company having, among owners and subcontractors, a very high proportion of northern content on projects. The company, which is dedicated to ongoing employee training, has a work force in excess of 600 people on various projects in northern Canada and sources 66% to 81% of the goods and services it uses from the North.

Nuna was contracted to build the 567-kilometre ice road from Yellowknife to Lupin, Nunavut, and since 1998 the company has operated and maintained this roadway, which provides access to northern mining sites each winter.