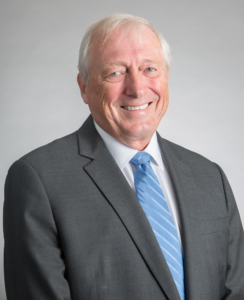 The remarkable success and longevity of Agnico Eagle Mines owes much to Eberhard (“Ebe”) Scherkus, a multi-faceted geologist and professional engineer with an impressive track record of achievement. He joined the company as a project manager in 1985, became chief operating officer (COO) in 1998, and was president and COO from 2005 until he retired in 2012.

During this period he transformed Agnico Eagle from a regional single-mine company into a top-performing global gold producer with nine mines in Canada, Finland and Mexico. He also earned a reputation as a generous career mentor, environmentally responsible industry leader, and a builder of bridges with Indigenous Peoples and other stakeholders in Canada and abroad.

Born in Germany, Scherkus came to Canada as an infant and was raised in Val-d’Or, Quebec. He earned his B.Sc. Geology from McGill University in 1975, and worked for several companies before joining Agnico Eagle. The company was then headed by legendary founder Paul Penna, who needed a technical team to turn around a struggling, low-grade open-pit mine with limited reserves.Scherkus accepted the daunting challenge, transformed LaRonde into a productive mine, and subsequently expanded it at least four times. LaRonde’s 2.2-kilometre deep Penna shaft is the deepest singlelift shaft in the Americas. As of 2017, the flagship mine had produced five million ounces of gold, with another 2.6 million ounces in proven and probable reserves.

Scherkus successfully developed the nearby Goldex and Lapa gold mines, as well as the Meadowbank gold project in Nunavut, which Agnico Eagle had acquired in 2007. Meadowbank was Agnico Eagle’s first Arctic mine, where the main difficulties were the remote location and harsh weather conditions.

An Impact Benefit Agreement was signed with the Kivalliq Inuit Association to ensure employment and business opportunities. Meadowbank poured its first gold in 2010, and had produced two millions of gold by 2015, with nearly 250,000 ounces in 2018. More recently, Agnico Eagle opened the Meliadine gold mine to expand its presence in Nunavut. Another phase of Agnico Eagle’s growth was outside of Canada, where the challenge was to adapt to new cultures while promoting corporate policies on responsible mine development.

The Kittila mine in Finland and the Pinos Altos mine in Mexico both poured their first gold in 2009. Scherkus demonstrated strong leadership during this period of growth by building highly skilled professional teams for each operation. The number of employees grew from about 400 people at Canadian projects in 1985, to 5,700 people at mines and projects around the world when he retired. Since then, Scherkus has continued to contribute to the mining industry by serving as a director of numerous companies and as a board member of industry associations.

Scherkus has received many awards and honours for his achievements, including the Viola McMillan Award from PDAC in 2000, and the Selwyn G. Blaylock Medal from CIM in 2005. He was a co-winner of The Northern Miner’s “Person of the Year” award in 2007 and the 2011 recipient of the Nunavut Mining Symposium’s Mike Hine Award. Prior to being appointed to the Governors’ Circle of the Quebec Mining Association in 2014, Scherkus served as president of the association in 1994.