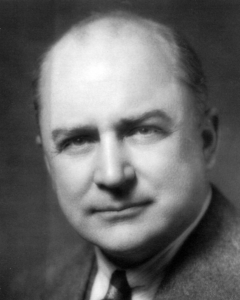 Few people have done more to introduce science and technology to mineral exploration than Hans Lundberg, a visionary pioneer in the developmentand application of geophysical and geochemical methods in Canada and other parts of the world. He was the first to conduct ground geophysical
surveys in Canada in the 1920s, which led to two major discoveries in the Buchans area of Newfoundland. He was the first to attempt geochemical prospecting in Canada, and the first to integrate geophysics and geochemistry into a multi-disciplinary exploration strategy.

Lundberg’s greatest accomplishments were the first application of airborne geophysical methods in the 1940s, and his adaptations of geophysical instruments for use from aircraft. These ideas originated from his early years in Sweden, where geophysics was emerging as a new tool for finding buried mineral deposits. Lundberg graduated in 1917 from the Royal Institute of Technology, Stockholm, with a thesis entitled “Electrical Prospecting.”

The young civil engineer went on to develop a new variation of “equipotential” surveying that proved more sensitive and practical for field use in a cold climate, which resulted in two important polymetallic discoveries in the Skelleftea District: Kristineberg in 1918 and Bjurfors in 1922. During this period he also experimented with instruments carried aloft by kites, gliders and large balloons, in the belief that aerial magnetic surveys would provide better access and faster coverage than ground surveys. It was not until 25 years later, after World War II, that his lofty dreams were realized.

Lundberg moved to Canada in 1926, became a citizen in 1936, and assisted the war effort by helping the government meet its strategic mineral resource requirements. He had followed developments in aviation and electronics and was determined to pursue his vision of airborne geophysics once peace was declared. In 1946, he began aerial magnetic surveys into northern Ontario and Quebec, using one of the first commercial Bell helicopters in Canada.

He saw the electromagnetic (EM) technique as the next logical geophysical method to deploy by aircraft, and in 1947, conducted trials of an EM system built inside a helicopter bubble. The system worked, albeit with low limits of coverage, and led to further advancements such as mounting EM systems on fixed-wing aircraft. In the 1950s, Lundberg pioneered airborne radiometric surveying, which would prove invaluable to uranium exploration in subsequent decades.

While the geophysical methods introduced by Lundberg would be considered primitive by today’s standards, they did contribute to numerous discoveries, starting with the Lucky Strike and Oriental polymetallic discoveries at Buchans. These deposits accounted for half the 56-year production history of this prolific mine. Lundberg’s pioneering use of biogeochemistry, lake-sediment sampling and boulder tracing also contributed to the success of Buchans.

Despite these early successes, and an impressive track of discovery, Lundberg faced some industry scepticism for his novel ideas and eclectic interests. In response, he wrote scientific papers, gave lectures, supported research, patented 20 inventions, and more importantly, encouraged many young geophysicists and geochemists to advance these new branches of science. He left a legacy of discovery and innovation that was unparalleled in his lifetime, and earned him the reputation as Canada’s first ambassador of exploration.