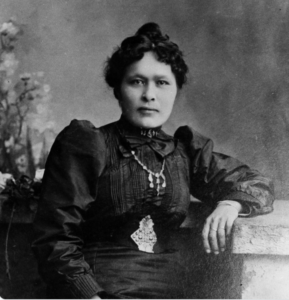 The discovery of placer gold in the Klondike set off one of the world’s greatest gold rushes and forever changed the history of Yukon and Canada. Historic accounts of the landmark event recognized the contribution of Canadian prospector Robert Henderson and the bonanza gold strike made by American adventurer George Carmack, his wife Kate (Shaaw Tlaa) and her Tagish First Nation relatives, brother Skookum Jim Mason (Keish) and nephew Dawson Charlie (Kaa Goox). The day of discovery was August 17, 1896.

In July of 1896, George and Kate Carmack, along with Skookum Jim Mason and Dawson Charlie, were camped at the junction of the Yukon and Klondike Rivers. Henderson visited their fish camp and told Carmack of some promising “colours” he had found panning in Gold Bottom Creek. Henderson invited Carmack, a part-time prospector, to try his luck in the region, but made it known that he did not want natives staking claims.

Carmack and his team later visited Henderson’s showing, but left unimpressed. During the brief visit, Henderson again offended Carmack’s Indigenous partners. His prejudices would ultimately cost him a fortune. The Carmack team returned to their camp via Rabbit Creek, a tributary of the Klondike River where the fi rst large gold nugget was then found.

Carmack claimed he made the discovery, but other accounts credit Skookum Jim. Oral histories shared among local Indigenous communities suggest that Kate found the nugget while getting water for tea. Clouded in hearsay and sensational reporting of the time, most historians agree that it is not clear who made the actual discovery. It is accepted, however that the Carmack team, wandering and living off the land for a decade, were the ones in the right place at the right time.

Carmack and his male partners rushed to register their claims on Rabbit Creek, which was soon renamed Bonanza Creek. Prospectors swarmed nearby creeks to stake claims after hearing news of the spectacular discovery, but not Henderson, who continued to work his meagre claim just over the hill. By the time he found out, all of Bonanza Creek had been staked. Also staked was a small branch tributary named Eldorado, which proved to be even richer in placer gold.

George and Kate Carmack, Skookum Jim and Dawson Charlie prospered from the discovery, unlike Henderson, who lost his unregistered claim and blamed Carmack for not keeping him informed of the find. The Canadian government later awarded a modest pension to Henderson for being the first to systematically explore the Klondike region and recognize its gold potential.

As news of the discovery reached the world, 30,000 men and women stampeded to the Klondike and established booming Dawson City, named after George Dawson of the Geological Survey of Canada. At the height of the rush, 22,000 people climbed the arduous Chilkoot Pass on their way to the Yukon goldfi elds. Faded photographs showing a thin black line of climbers on the snow-clad mountain are among the most poignant and memorable images of Canadian history.

The Klondike rush established Yukon and opened up the North, as well as Canadians’ eyes to its possibilities. An active placer mining industry continues in Yukon today and some of its miners are the descendants of men and women who joined the Klondike rush more than a century ago.