ttp://www.pendaproductions.com/ This video was produced by PENDA Productions, a full service production company specializing in Corporate Communications with a focus on Corporate Responsibility. 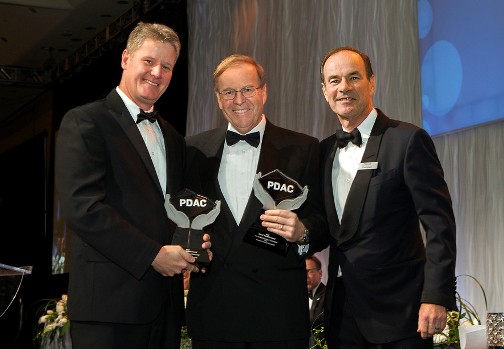 This award, which is named in honour of the PDAC’s longest serving president, is given to an individual or organization demonstrating leadership in management and financing for the exploration and development of mineral resources.

Gahcho Kué Diamond Mine, De Beers Group of Companies & Mountain Province Diamonds: For development of the world’s largest new diamond mine in the last 13 years, a complex project that is expected to produce approximately 54 million carats of rough diamonds over its lifetime.

Gahcho Kué Diamond Mine in Canada’s Northwest Territories (NWT) officially opened in September 2016. It is a joint venture between the De Beers Group of Companies, a privately-owned diamond exploration, mining, rough diamond sales and retail company that owns 51% of the project; and Toronto-based Mountain Province Diamonds, that owns the remaining 49%. Mountain Province discovered the first kimberlite at Gahcho Kue in 1995 and entered into a joint venture with De Beers in 1997. Gahcho Kué is the world’s largest new diamond mine in 13 years and is expected to produce approximately 54 million carats of rough diamonds during its initial 12-year lifespan. It is comprised of three open pits and is on track to reach full commercial operation in the first quarter of 2017.

The US$1 billion exploration, delineation and construction of Gahcho Kué was no small undertaking. Most of the supplies were brought in via an ice road from Yellowknife—approximately 280 kilometres away—and sometimes took more than 20 hours to transport. The ice road season typically lasts between just six and eight weeks, making the window of opportunity very short. Despite these challenges, the project was completed ahead of time, and under budget. It proudly recorded no serious injuries and achieved a lost-time injury rate of 0.15 and has not recorded a lost-time injury in over 1-million work hours.

The mine brings many benefits to the region and to all of Canada, by employing 530 full-time positions on a fly-in, fly-out rotation. Even during its construction, the mine provided outstanding economic benefits. Between 2006 and 2015, its development provided $440 million to the NWT economy, and another $350 million spent across Canada. Once the mine is fully operational, estimates are equivalent to $5.7 billion in Gross Value Added to the NWT.

In 2015, including its supply chain impacts, the mine supported more than 2,700 jobs, with employment at the site representing more than 10 per cent in the NWT’s extractive industries. As of October 2016, while still ramping up to full production, the De Beer’s workforce at Gahcho Kué already had 46% representation of NWT-resident employees, 20% self-identified Indigenous employees and 14% female employees.

Gahcho Kué is De Beers largest ever mine outside of southern Africa. It will offset declining production at the company’s other two Canadian diamond operations. It is Mountain Province Diamonds’ first ever mine. Canada is the world’s third largest diamond producer, and Gahcho Kué is the sixth commercial diamond mine in the country. It will account for 3% of the world’s changing diamond market.