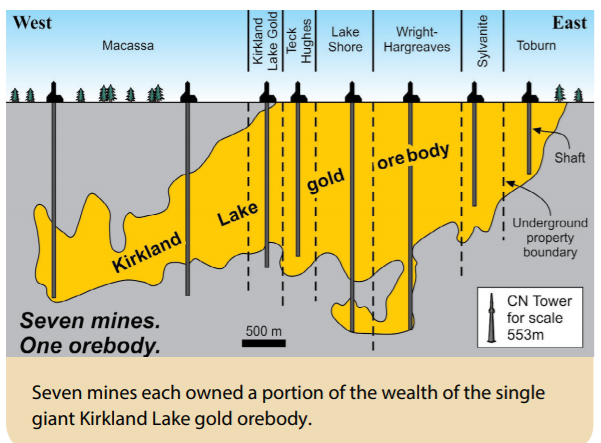 The Abitibi is the largest Archean greenstone belt in the world. It’s roughly 150 km wide and stretches from just west of Timmins in Ontario for about 650 kms. to Chibougamau, Quebec. The Kirkland Lake camp stretches from Matchewan on the western side, through the town of Kirkland Lake to the Ontario/Quebec borber where the lengendary Kerr/Addison mine – the biggest historic gold producer in the camp – was found beside Larder Lake.

This makes the camp the second richest in Ontario after the Timmins region which has produced about 76 million ounces of gold by Dec/2018 and the third most productive in Canada, the national number two spot going to the Val d’Or/Rouyn-Noranda camp next door in the province of Quebec which has produced 72 million ounces of gold to date (Dec/2019).

In Kirkland Lake, seven mine in a row or “golden sisters” have produced over 25.6 million ounces of gold since 1913 from a single ore body. (DigiGeoData Inc., 2018). They run west to east – the Macassa, Kirkland Lake Gold, Teck Hughes, Lake Shore, Wright Hargreaves, Sylvanite and Toburn mines.

Total gold endowment for the Kirkland Lake area reached about 59,536,000 million ounces at the end of 2017, if proven & probable, measured & indicated and inferred resources are included.

RepublicOfMining.com Note: Many of Kirkland Lake’s gold mines were in production during the 1930s. The gold mines of Ontario were one of the few sectors of the provincial economy that prospered during the Depression. The price of gold was guaranteed at $20.67 avoiding the low prices for base metals like nickel and copper.

To get the economy moving, U.S. President Roosevelt raised the price of gold to $35.00 an ounce. Marginal properties became valuable and northern exploration exploded with activity. Gold mines were given a tax exemption in 1936 to encourage development in Canada. Ontario’s large production of gold allowed the country to maintain her credit and substantially reduce the debt. From 1931 to 1941, Kirkland Lake grew from 1,170 to 9,915 people and was one of the most prosperous communities at that time.

Approximately 39,749,000 ounces or just over 95% of total production in the Kirkland Lake camp came from 10 mines, most of which lie on a major deformation zone called the Larder Lake-Cadillac Break. See box below.

For the rest of this profile: https://digigeodata.com/area/kirkland-lake/