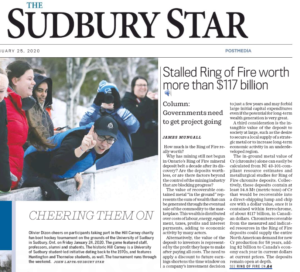 Dr. James Mungall is a professor of economic geology at Carleton University. He was Noront’s Chief Geologist during the discovery phase of exploration, but has no financial conflict of interest related to the Ring of Fire. He is considered the top specialist in magmatic ore deposits in Canada and is well-respected globally. Both the Ring of Fire and the Sudbury Basin are magmatic ore deposits.

How much is the Ring of Fire really worth?

Why has mining still not begun in Ontario’s Ring of Fire mineral deposit belt a decade after its discovery? Are the deposits worthless, or are there factors beyond the control of the mining industry that are blocking progress?

The value of recoverable contained metal “in the ground” represents the sum of wealth that can be generated through the eventual sale of the commodity to the marketplace. This wealth is distributed over costs of labour, energy, equipment, taxes, profits and interest payments, adding to economic activity by many actors. 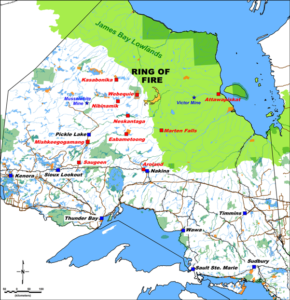 Alternatively, the value of the deposit to investors is represented by the profit they hope to make after paying all costs. The need to apply a discount to future earnings shortens the time window on a company’s investment decision to just a few years and may forbid large initial capital expenditures even if the potential for long-term wealth generation is very great.

A third consideration is the intangible value of the deposit to society at large, such as the desire to secure a local supply of a strategic metal or to increase long-term economic activity in an underdeveloped region.

The in-ground metal value of Cr (chromite) alone can easily be calculated from NI 43-101-compliant resource estimates and metallurgical studies for Ring of Fire chromite deposits. Collectively, these deposits contain at least 34.8 Mt (metric tons) of Cr that would be recoverable into a direct-shipping lump and chip ore with a dollar value, once it is contained within ferrochrome, of about $117 billion, in Canadian dollars. Chromiterecoverable from the measured and indicated resources in the Ring of Fire deposits could supply the entire North American demand for new Cr production for 58 years, adding $2 billion to Canada’s economy each year in current dollars at current prices. The deposits remain open at depth.

Noront Resources obtained a 2012 feasibility study for the Eagle’s Nest Ni deposit, also in the Ring of Fire, and predicated on the Ontario government’s 2012 promise to build a road to the deposit. An eight-year mining plan for Eagle’s Nest, with a discounted payback of mining infrastructure costs excluding the road in 2.5 years, gave an estimated net present value then of about $500 million.

Assuming similar underground bulk mining methods through the same mining infrastructure as Eagle’s Nest, one can estimate total costs on the order of $250 per ton to mine and transport 3,000 t/day of direct-shipping chromite ore to a port or smelter, including payments to maintain the road itself. This price is competitive with profitable current prices for similar ore at the shipping terminal worldwide for ore, which must then be shipped halfway around the world to China.

At 3.5 to 4 MW hr/ton of metal, chromium smelting is highly electricity-intensive. It would be more profitable to avoid shipping costs and add value by smelting in Canada where industrial electricity costs as little as one-third the price in China and does not rely on coal.

What intangible benefits could arise from establishing a secure North American supply of chromite? The global Cr market is dominated by producers in South Africa, Kazakhstan and Turkey, who send most of their ore and/or ferrochrome product to China for processing. Conditions in these nations pose obvious trade and security risks to the supply of Cr, which is a critically important and irreplaceable metal for stainless steel and superalloys.

Just before then-CEO Lourenco Goncalves of Cliffs Natural Resources announced in 2014 that Cliffs would abandon its $550-million investment in the Ring of Fire at an eventual 95 per cent discount, he said that the original Cliffs “acquisition was made based on the belief that a connection … would be built between the Ring of Fire and the south.”

They sold the deposits to Noront Resources when they came to believe that the road would not be built “in the next 50 years.”

The massive road network in southern Canada is entirely financed by the public, in the service of industry — why not a road to the Ring of Fire? The reason nothing is happening in the Ring of Fire has nothing to do with the value of the deposits. It is entirely due to the inability of governments at all levels, including First Nations, provincial, and federal, to reach consensus on land tenure and development plans.

It is time for all of these groups to negotiate in good faith and govern effectively for their stakeholders so that the value of the Ring of Fire can be realized while providing access and development opportunities to a marginalized region of Ontario.

For the original source of this article: https://www.thesudburystar.com/news/local-news/column-stalled-ring-of-fire-worth-more-than-117-billion