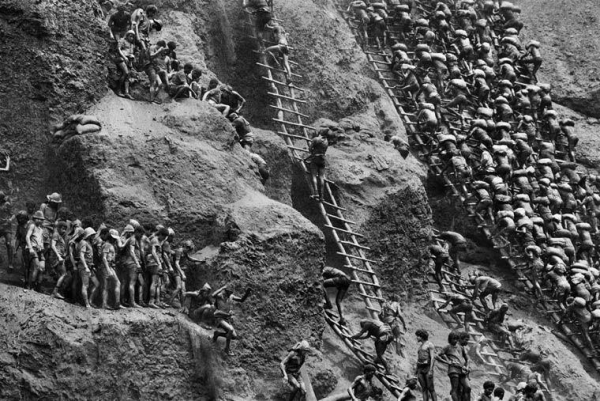 Serra Pelada was a large gold mine in Brazil 430 kilometres (270 mi) south of the mouth of the Amazon River. In 1979 a local child swimming on the banks of a local river found a 6 grams (0.21 oz) nugget of gold. Soon word leaked out and by the end of the week a gold rush had started. During the early 1980s, tens of thousands of prospectors flocked to the Serra Pelada site, which at its peak was said to be not only the largest open-air gold mine in the world, but also the most violent.

At first the only way to get to the remote site was by plane or foot. Miners would often pay exorbitant prices to have taxis drive them from the nearest town to the end of a dirt track; from there, they would walk the remaining distance—some 15 kilometers (9.3 mi) to the site.

Huge nuggets were quickly discovered, the biggest weighing nearly 6.8 kilograms (15 lb), $108,000 at the 1980 market price ( now $ 310,173 in 2016). During the peak of the gold rush the mine was known for appalling conditions and violence, whilst the town that grew up beside it was notorious for both murder and prostitution.

Brazilian photographer Sebastião Salgado traveled to the mines of Serra Pelada taking some of the most haunting pictures of the workers there, highlighting the sheer madness and chaos of the operation. He’s quoted as saying when he saw the mine, “Every hair on my body stood on edge. The Pyramids, the history of mankind unfolded. I had traveled to the dawn of time”.

This is how Sebastião Salgado described the mine during an interview in 1992:

Swept along by the winds that carry the hint of fortune, men come to the gold mine of Serra Pelada. No one is taken there by force, yet once they arrive, all become slaves of the dream of gold and the need to stay alive. Once inside, it becomes impossible to leave.

For the rest of this article and photography: http://rarehistoricalphotos.com/hell-serra-pelada-1980s/