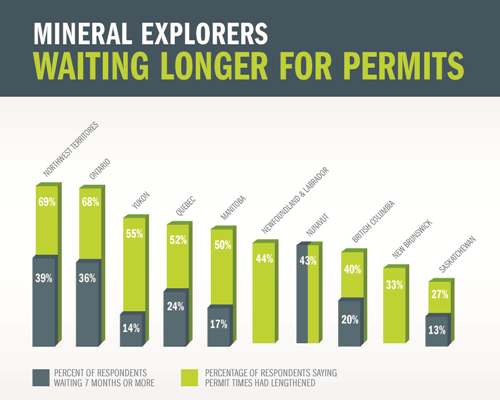 CALGARY, AB–(Marketwired – February 23, 2016) – Permit times — the length of time it takes to get approval for mining exploration — are increasing across Canada and especially in Ontario, according to a survey of mining companies released today by the Fraser Institute, an independent, non-partisan Canadian policy think-tank.

“Growing wait times for permits add to the cost of exploration and therefore deter investment and ultimately hinder Canada’s ability to realize its considerable mineral potential,” said Kenneth Green, Fraser Institute senior director of energy and natural resources and co-author of Permit Times for Mining Exploration: How Long Are They?

Based on the experiences and opinions of industry professionals, the study compares the efficiency, transparency and certainty of the permitting process in jurisdictions across Canada.

Of all the provinces and territories, Ontario is a clear laggard.

For example, 68 per cent of survey respondents indicated that permit approval wait times in Ontario had grown over the previous 10 years compared to 52 per cent in Quebec and 40 per cent in British Columbia — Ontario’s main competing jurisdictions in Canada. In fact, according to the survey, only the Northwest Territories had more respondents indicate that permit wait times were increasing.

On a different measure — whether or not survey respondents received permits in six months or less — Saskatchewan ranked first (87 per cent of respondents said yes) compared to 76 per cent in Quebec and only 64 per cent in Ontario. On the issue of the ease and clarity of the permitting process, Ontario also ranked poorly. Twenty-five per cent of mining company officials said the level of transparency in the permitting process in Ontario is a strong deterrent to exploration investment.

“To maximize exploration investment in the province, Ontario needs to put forth efficient and transparent permitting processes,” said Taylor Jackson, study co-author and policy analyst at the Fraser Institute.

“All jurisdictions across Canada need to understand that long wait times have the potential to deter mining companies from even applying for permits. Ultimately, uncompetitive mining policies can discourage exploration and subsequently lower job creation and tax revenues,” Green said.

The Fraser Institute is an independent Canadian public policy research and educational organization with offices in Vancouver, Calgary, Toronto, and Montreal and ties to a global network of think-tanks in 87 countries. Its mission is to improve the quality of life for Canadians, their families and future generations by studying, measuring and broadly communicating the effects of government policies, entrepreneurship and choice on their well-being. To protect the Institute’s independence, it does not accept grants from governments or contracts for research. Visit www.fraserinstitute.org