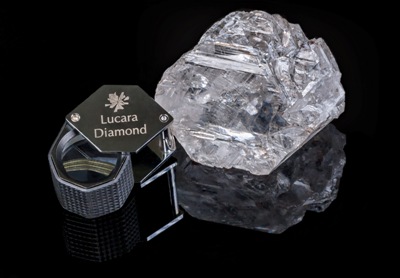 A Canadian mining company has recovered a diamond for the ages. The astounding stone has no precedent in the past century and will command a massive price at auction. The only question is how high it will go.

Lucara Diamond Corp. said it recovered a gigantic 1,111-carat, gem-quality diamond from its Karowe mine in Botswana this week. To put that in perspective, it is believed to be the second-largest gem-quality stone ever found. The only one known to be bigger is the legendary Cullinan diamond, which was recovered in South Africa in 1905 and weighed 3,106.75 carats.

The diamond measures 65 millimetres by 56 millimetres by 40 millimetres. It is so big that Vancouver-based Lucara could not do a proper analysis, because the stone won’t fit in its scanning machine.

But the company knows for certain that it is a white, Type IIa diamond, considered the purest form of diamond. Only about two per cent of the world’s diamonds are Type IIa. There are very low amounts of impurities within this stone, according to the company.

Lucara is part of mining kingpin Lukas Lundin’s stable of companies, so this marks another big win for him and his brother Ian.

For the rest of this article, click here: http://business.financialpost.com/news/mining/canadian-miner-lucara-uncovers-1111-carat-diamond-believed-to-be-second-largest-ever-found