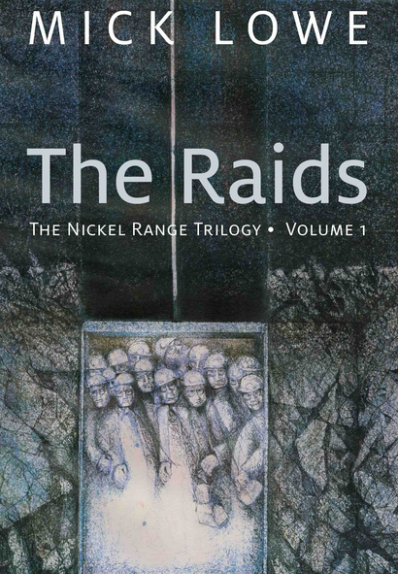 Sudbury author Mick Lowe has undertaken a herculean task, one far more challenging than writing a trilogy of novels after suffering a debilitating stroke six years ago.

The well-known journalist and non-fiction author is out to elevate the people of Sudbury and our history to the “mythos” of Canadian legend. “I want to create legend as well as history and fact because we’re worth it,” Lowe says quite simply.

Lowe, 67, will launch the first book in the series, “The Raids,” on Sunday, May 25 at the Steelworkers Union Hall and Conference Centre.

The setting for the launch party is ironic given the book is a fictionalized account of the bitter, decade-long battle by United Steelworkers to pull members from the then powerful Mine Mill and Smelter Workers Union Local 598.

The book is set in the spring of 1963, when 19-year-old Jake McCool works his first shift at Stobie Mine. The young miner becomes a participant in what Lowe describes as a war between the two unions. Lowe, who has lived at Pioneer Manor since his left side was paralysed from the stroke, says employees in their 20s there have shown great interest in what he’s been working on.

He has written four non-fiction works, including the popular “Conspiracy of Brothers,” about the Port Hope Eight, former members of the Satan’s Choice Motorcycle Club. They served a total 50 years in prison for a murder they did not commit. The book was rereleased last June.

Lowe has been telling young people at the Manor: “I’m writing about the war that occurred here in the City of Sudbury and do they know anything about it.

“And they say, ‘No, we studied World War One and World War Two, but no we never heard of this war between the Steelworkers and Mine Mill.’ ”

Born in Nebraska, Lowe emigrated to Canada in 1970 and says it’s a shame more Canadians don’t know their own history “because it’s wonderful history.”

Lowe has incorporated some of that colour into his first novel and his second, which is half-written, titled “The Insatiable Maw,” a term the late Sudbury lawyer and Liberal MPP Elmer Sopha used to describe the Copper Cliff Smelter. It’s set in 1968.

The third book, whose working title is “The Year of the Long Strike,” will revolve around the nine-month strike by United Steelworkers Local 6500 against Inco in 1978, led by president Dave Patterson, a friend of Lowe’s.

After decades as a newspaper editor and columnist, freelancer for magazines such as Macleans and newspapers like the Globe and Mail, and authoring four non-fiction books, fiction is a refreshing change.

What’s intriguing people who have read “The Raids” is where the line between fact and fiction ends.

“The Raids” is full of technical terminology as close to accurate as Lowe could make it. As a journalist, he went underground many times and remembers well the sights, sounds and smells of being thousands of feet under the surface.

The raids did occur, with the U.S.-based Steelworkers “stealing” thousands of members from the left-leaning — some said Communist in the Cold War days when Communist was a four-letter word — Mine Mill union.

The novel is full of names of real people although they may not be placed in their proper timeline in Sudbury history.

So it’s small wonder people constantly ask Lowe: “Is so and so really such and such? Did this actually happen?” (Hint: Lowe insists he is NOT journalist Foley Gilpin because he hadn’t arrived in Sudbury in 1963.)

For the rest of this article, click here: http://www.thesudburystar.com/2014/05/10/sudburys-history-part-of-new-book-the-raids