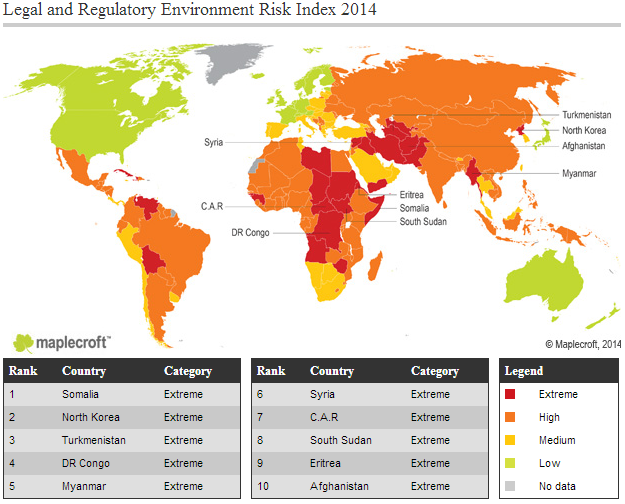 Myanmar has been identified as the country making the greatest improvements to its business environment for 2014. Strides have been made through reforms to address issues such as corruption; rule of law; the regulatory framework; respect for property rights; and corporate governance, reveals Maplecroft’s annual Legal and Regulatory Environment Risk Atlas (LRERA). Senegal, Guatemala, Mozambique and Rwanda, meanwhile, are among the countries with best performance over the last five years.

The fifth annual Legal and Regulatory Environment Risk Atlas includes 21 risk indices developed to enable companies and investors to monitor the ease of undertaking business in 173 countries. Since 2009 some of the biggest increases in legal and regulatory risk have been experienced by foreign investors in Argentina, Bahrain, Bangladesh and Egypt. Maplecroft states that the business environment in these countries is being curtailed by factors such as a lack of respect for the rule of law and property rights; weak investor protection; increasing regulatory burdens; and poor governance resulting from instability.

Legal mechanisms and regulatory structures are typically well entrenched features of a country that are not subject to fast change without significant political will and reform. However, over the last five years the LRERA reveals that a number of countries have made steady improvements. Senegal has risen 23 places from 28th to 51st (1st place is considered the highest risk in the LRERA), Guatemala went from 32nd to 61st, Mozambique 40th to 71st, and Rwanda 66th to 101st.

These decreases in risk were primarily due to substantive efforts to improve the legal and regulatory environment and encourage foreign investment. This includes moves to strengthen corporate governance, to reduce regulatory hurdles, to combat corruption and to improve rule of law.

However, in the last year the only country to significantly improve its risk profile is Myanmar, which moved up more than 10% in the LRERA scoring system. The government’s resolve to improve the business environment means a number of important steps have been taken to enhance investor protection, including the implementation of a new foreign investment law in March 2013, which provides much needed clarity around essential issues, such as foreign ownership limits and land leasing rules.

This continued commitment has resulted in a steady climb in the ranking from worst position at the bottom of the ranking in 2012, to 3rd from bottom in 2013 and 5th in 2014. While this appears a modest shift in ranking, it has already resulted in significant improvements for business, and Maplecroft forecasts that if Myanmar sustains its current trajectory it may move out of the ‘extreme risk’ category in the next 1-3 years.

Despite this positive medium-term outlook, current levels of corruption, lack of rule of law and interference in business by a wide range of powerful and vested interests, including the military, continue to create a very uneven playing field for foreign investors. Myanmar’s commitment to upholding rule of law continues to be tested.

For the rest of this article, click here: http://maplecroft.com/portfolio/new-analysis/2014/01/08/business-environment-improving-myanmar-mozambique-and-senegal-legal-and-regulatory-risk-atlas/