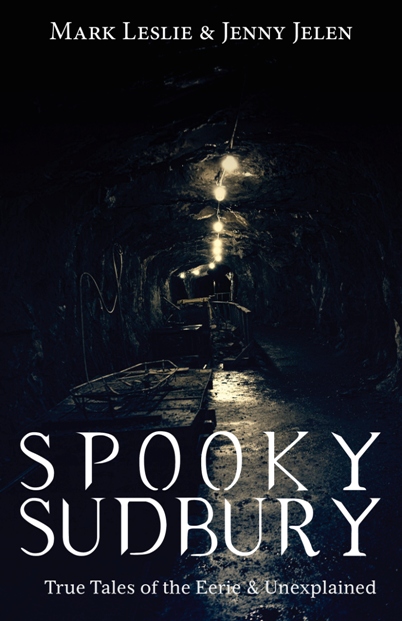 It was a fresh new century when, in newlywed bliss, Amanda, her husband, their daughter, and a red Doberman moved into the beautiful old house they had purchased in an established Sudbury neighbourhood. The gorgeous two-storey home had character and charm, but it also held a little something else that wouldn’t fully reveal itself until a couple of years later, when their son arrived.

And though their very first night in the new home was a disturbing night to remember, the chills that later greeted them were never frightening, never threatening; they were merely eerie. “Our first night at the house was a horror!” Amanda says with a bit of a grin.

They were exhausted from the day of moving, and the beautiful spa bath upstairs that had so attracted Amanda when they had been considering the home called to her like a siren beckoning a sailor on the open seas.

Amanda started the tub, filled it up, and then went down¬stairs to get a nice glass of wine to drink while relaxing in the tub. It wasn’t until she was heading back upstairs that she heard what sounded like rain inside the house. She ran back down to the kitchen to see water pouring from the pot lights in the kitchen ceiling.

As the water showered down, running everywhere and flooding the kitchen floor, Amanda screamed for her husband. Hot water was pouring everywhere as the two scrambled around the home trying to figure out how to stop the water from flood¬ing — but the tub hadn’t been overfilled — it was draining on its own.

The floors in the kitchen, dining room, and the hallways, all hardwood flooring, started buckling and were completely ruined. They had to be replaced. The renovation crew they hired explained that there was a crack in the tube that sucked the water from the tub and through the spa jets, which was the source of the leak.

The next strange thing that happened, before the events began to occur regularly, involved their eight-year-old daughter, who occasionally was overheard speaking to her imaginary friend. Having an imaginary friend is not an uncommon thing with children; although Amanda’s daughter mentioned later that her friend was the nice man who had once lived in the home.

Amanda had heard the tragic tale of the miner who had been the previous homeowner. She and her husband had purchased the home from the miner’s wife. She had very briefly explained that she was selling the house after the tragic mining accident that had suddenly taken her husband from her, not just because the home was too large for her, but that there were too many memories of her beloved in the home; memories that, though tender, still haunted her. So, sadly, she moved on.

The miner’s mother lived next door and mostly kept to herself the first few years, nodding politely and greeting them with the occasional “good morning,” or “good afternoon,” or whatever seasonal greeting was appropriate.

Amanda had always felt bad for the woman, knowing, as every parent does, that one of the worst things that can happen to a parent is to lose their child.

Regular eerie events only began to occur once their baby boy arrived home, a couple of years after having moved into the house.

Amanda and her husband occasionally felt cold spots in their son’s bedroom — sudden and localized plummets in temperature. Sometimes, the baby monitor would go on for no reason at all and the door to his room would close all by itself.

The times when, in the middle of the night, their son would wake up screaming, were quite terrifying to Amanda and her husband, particularly when the child could not be easily con¬soled until he was removed from the room. “I had never heard a baby scream like that before,” Amanda said.

Their docile and family friendly Doberman, who regularly slept in the bed with Amanda and her husband, occasionally refused to go upstairs. It would pause on the middle landing area of the stairs and refused to take another step forward, just stand there, shackles up, shaking, and barking as if something or someone was there.

Over the first few years, while their conversations with the quiet old woman next door rarely went beyond quick mentions of the weather or the latest news, on one occasion, the elderly woman asked if Amanda’s husband smoked.

“Why do you ask?” Amanda said.

“Sometimes,” the woman sad in a quiet voice “I see a man standing outside on your front steps, smoking at night.”

The woman explained that every so often, late at night when she was looking out her window, the one that gave her a clear view of her son’s old home, she would notice a man standing on the front step and smoking, very much like her son used to do. She didn’t say anything about it for a long time, but curiosity got the better of her and she decided to ask Amanda.
“Neither of us smokes,” Amanda told her.

“It looks just like my son,” the woman sad, with a sad, muted smile on her face.

And though goosebumps pimpled up on Amanda’s arm, it also gave her a sentimental feeling. Thoughts that the man’s spirit might still be in the home left her with a sense of warmth. Yes, their dog and their son seemed to be able to sense this presence more clearly than anyone else, but, after their son’s crying incidents ceased, nobody in the family ever felt unsafe or anything but comforted in the home.

Instead, Amanda and her family lived there for several more years in peace and comfort before moving out. And the whole time they were aware of the ethereal resident living with them; the figure whose occasional appearance, standing quietly on the front step smoking like he had done for years before he was taken from the world, seemed to bring a small sense of comfort and peace to the kind, quiet old woman next door who had lost her only son.