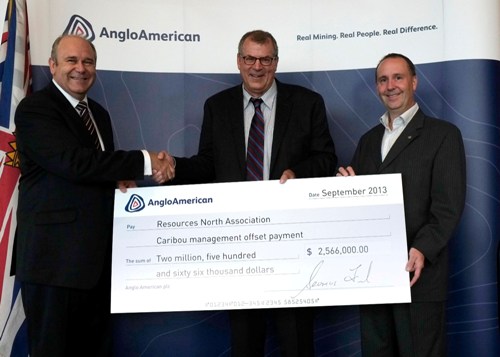 This is the largest funding contribution made by a mining company for caribou mitigation measures under the Peace Northern Caribou Plan and Mr Waldron said he was proud to personally present the donation on behalf of Anglo American.

“This contribution comes as part of Anglo American’s Trend-Roman project, an open cut expansion for the Peace River operation near Tumbler Ridge in north-east British Columbia and represents the company’s commitment to maintaining the highest standards of environmental protection,” Mr Waldron said.

“We understand and respect the caribou’s importance to First Nations and local communities, and we are proud to play a key role in this environmental management project through our unprecedented securement of 2,009 hectares of caribou habitat and a financial contribution of $2.566 million,” Mr French said.

On receiving the cheque, Minister Thomson said, “Anglo American’s Roman Mine project is an excellent example of how resource development can be done in an environmentally responsible and respectful manner.”

Anglo American has exceeded the amount of tenure land it previously committed to protect caribou habitat, which is a first within the British Columbia mining industry.

“Significantly, we have set aside a total of 2,009 hectares of our tenure, which represents an area four times the size of the Trend-Roman project area,” Mr French said.

“Just as we have worked with our stakeholders to deliver world-class environmental management practices, in the months ahead our focus will be on developing the Trend-Roman project to deliver a solid business in Canada.

“The start of mining activities at Roman is an important next step in our plans to extend the life of our Peace River operations for another 16 years,” Mr French said.

Anglo American is one of the world’s largest mining companies, is headquartered in the UK and listed on the London and Johannesburg stock exchanges. Our portfolio of mining businesses meets our customers’ changing needs and spans bulk commodities – iron ore and manganese, metallurgical coal and thermal coal; base metals and minerals – copper, nickel, niobium and phosphates; and precious metals and minerals – in which we are a global leader in both platinum and diamonds. At Anglo American, we are committed to working together with our stakeholders – our investors, our partners and our employees – to create sustainable value that makes a real difference, while upholding the highest standards of safety and responsibility across all our businesses and geographies. The company’s mining operations, pipeline of growth projects and exploration activities span southern Africa, South America, Australia, North America, Asia and Europe.