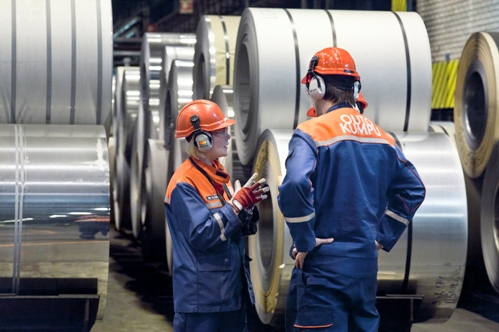 This was originally published in the Sudbury Star on August 31, 2013 under the title “From ore to steel“.

Canada is the only G-8 country in the world that does not have a “major” stainless steel sector. There is one speciality steel producer, ASW Steel Inc. in Welland, Ontario, that dedicates 30 per cent of its production capacity to stainless steel. Employing  about 95 people, the company manufactures roughly 30,000 tons of stainless steel ingots and billets. By comparison, Outokumpu, the biggest international producer, produces almost 3.6 million tonnes of stainless steels worldwide, slightly over ten per cent of the 35.4 million tonnes of global production last year, according to International Stainless Steel Forum preliminary figures.

We do have world-class carbon steel plants mainly concentrated in Ontario at Hamilton, Nanticoke and Sault Ste. Marie.

Stainless steels are more valuable than carbon steels due to their corrosion and rust resistance due to the addition of chromite. Nickel is added to some varieties of stainless steels to increase the hardness and strength, further corrosion resistance as well as enabling the material to withstand extreme cold and hot temperatures without becoming brittle or deforming.

Of the three major types of stainless steels – austenitc, martensitic and ferritic – all of which contain at least 10.5 percent of chromite, only the first variety uses nickel. Just a quick fact for context, the world produces roughly 24 million tonnes of chromite ore while only about 1.8 million tonnes of nickel is used on a yearly basis.

Between 1945 and 1977, Sudbury was the source of between approximately 80 and 50 per cent of the western world’s nickel production, a key ingredient in some stainless steel grades, as well as vital for military production. Yet many feel Ontario failed to leverage that overwhelming global dominance into a thriving stainless steel sector on some Great Lake location.

We must not let history repeat itself in a world of impending resource shortages!

Last spring, the NDP proposed a bill in the provincial legislature that would slightly promote the value-added processing of all mineral commodities inside Ontario with grandfathered exceptions to existing operations. They highlighted the fact that a stainless steel mill should be built in northern Ontario to take advantage of the region’s chromite and nickel resources.

They also focused on the issue that Ontario’s high energy costs should be revised in order to attract one of the global stainless steel producers.

The histrionics from both the Liberals and Conservatives sounded like the bill was the first step to nationalization instead encouraging more processing jobs inside the province when economically feasible. There is considerable merit to the NDP strategy and the Wynne government which is currently canvassing the province for “job generating ideas” would be wise to pay attention.

Let’s not forget that the rich chromite deposits in the Ring of Fire belong to the people of Ontario and as Drohan aptly stated, “With ownership comes the responsibility to be careful stewards over the long haul.”

South Africa which has a stainless steel industry has a very different attitude towards its rich geological heritage that includes a policy of resource-based industrialization that can produce more jobs than the mining sector by itself.

The country aims to set aside strategic mineral reserves in order to support “domestic beneficiation” – the transformation or increase in value of resources – but within a free-market economy. The government knows not all projects are amendable to this policy and each project will be accessed to gain maximum value.

Gold Fields is a major South Africa-based gold producer with operations in that country as well as Peru, Ghana and Australia. In a recent speech in Johannesburg , CEO Nick Holland appears to echo Drohan and stated, “We believe that the appropriate description of resource nationalism is a country’s efforts to extract the maximum value and develop an impact from finite resources in the ground. … Surely governments are correct in wanting to extract as much as they can for the benefit of the country and their people from these finite resources. In fact, we would even go further and say not only is it legitimate, it is actually their duty for the benefit of their people.”
But it is a tiny country with a medium sized chromite deposit that has many lessons to teach Ontario about value-added resource development.

One of the great success stories of this policy is the world’s biggest stainless steel producer Outokumpu Group which owns one medium sized chromite mine in the Arctic town of Kemi which was discovered in 1959.

From the very beginning, government officials were planning to build not only a ferrochrome furnace but a stainless steel facility as well. At that time Outokumpu was owned by the government but since has been largely privatized. The government still owns roughly 30% of the company – somewhat similar in principle to the strategic ownership the Brazilian government has over Vale. The Polish government also retains about 30% ownership of KGHM.

As part of Finland’s regional industrial development plans, Tornio, located 25 kilometers south of the mine on the Gulf of Bothnia was the location of the ferrochrome furnace. In 1976, a stainless steel plant was build adjacent to the ferrochrome furnace to optimize both energy costs and other economic efficiencies, and establish a fully integrated mining and manufacturing operation

Not one pound of chromite ore leaves Finland before it is transformed into stainless steel.

Geological colleagues of mine confess that the chromite deposits at Kemi are not as rich or large as those in the Ring of Fire.

In fact, with only a few years of exploration drilling, the Ring of Fire is known to contain the fourth largest chromite reserves in the world after South Africa, Zimbabwe and Kazakhstan. (222 million tons of Measured & Indicated & Inferred from only the Black Thor, Big Daddy, Black Bird and Black Creek deposits – Heinz H. Pariser Alloy Metals & Steel Market Research) We have only started to “scratch the surface” due to the high cost of exploration in the region.

Finland has about 120 million tons of reserves or 1.3 per cent of global total (Heinz H. Pariser Alloy Metals & Steel Market Research). Why can’t Ontario do the same as Finland with its much higher quality and larger chromite deposits?

In fact Ontario can imitate the Finnish chromite initiative but it will need a solid commitment and political policy change from Premier Wynne who has stated that creating jobs is one of her top priorities. The Premier should initiate a pro-active industrial strategy through the Ministry of Economic Development, Trade and Employment to engage or “have a serious conversation” with all the global stainless steel producers.

If Ontario were to duplicate the economically efficient ferrochrome/stainless steel Finland model than the current location for the ferrochrome furnace in Sudbury needs to be revisited. All viable stainless steel plants are located near a river, lake or ocean site to access bulk imports of steel scrap, nickel and ferrochrome, as water is the cheapest form of transportation versus rail and road.

Since the ferrochrome furnace would be built before a stainless steel mill, it should be located on a Great Lake port. This would significantly enhance the prospect of attracting a world-class stainless steel mill to Ontario. Thunder Bay, the closest large community to the Ring of Fire chromite mines would be the best candidate. That port would also facilitate the import of metallurgical coal, a key ingredient in ferrochrome production and inexpensively ship the product to world markets.

And it would resolve the extreme political bitterness in northwestern Ontario over the Sudbury location. To most in the northwest, it made no economic sense to refine chromite ore over a thousand miles away. Many feel that the location of Sudbury was more of a political than an economic decision.

Ferrochrome is a relatively inexpensive commodity, so transportation costs are critical for the long-term sustainability of this project. Compared to nickel (US$6.70/lb) or copper ($3.30/lb) the average price for high-carbon ferrochrome over the past few years has ranged between US$0.90 and US$1.40 a pound.

And unlike the very rich ore in the Sudbury Basin that produces nickel, copper, gold, silver, platinum group metals and a few others – which allows the mines to remain profitable much longer during cyclical price swings – the chrome ore from the Ring of Fire has no other economic by-products. Production costs must be carefully managed or chromite operations can become uneconomical if/when the ferrochrome price goes down due to increased competition or economic slowdowns.

There is an issue with rail access to Thunder Bay which would slightly add to the overall cost of the project. CN owns an abandoned 275 kilometre rail line between Longlac – which is close to the southern starting point of the proposed north/south transportation corridor into the Ring of Fire – and Thunder Bay called the Kinghorn Line. While the tracks have been taken out, the rail bed is in reasonably good shape and it would cost roughly $1 million a kilometer to re-install the tracks.

This rail line could be sold to Ontario Northland which has a proposal to build a rail road into the Ring of Fire. CP also has a 115 kilometer rail line – part of their main east-west route – that runs close to the abandoned CN line from Thunder Bay to Red Rock, almost 40 per cent of the distance to Longlac.

Currently, there is a stainless steel glut similar to the minerals sector. However, global stainless steel demand is forecast to rise by one-third over the next half decade, outpacing most other metals according to a recent report by Macquarie commodities research.

Combined with the “reindustrialization” of American manufacturing as companies bring back jobs and industrial operations from overseas, and the trillions of dollars needed to renew North American infrastructure over the next few decades, the potential for more North American stainless steel capacity is very promising.

The world will experience mineral shortages in the decades ahead as billions of people in the developing nations continue to urbanize and industrialize. The commodity super-cycle is far from over.

Southern Ontario’s auto and manufacturing sectors have yet to recover its many good paying jobs since the economic downturn. Even the mighty high-tech champion, Blackberry Ltd., is in serious financial decline. The province will not be able to balance its $11 billion deficit for many years to come, increasingly questioning the sustainability of our health, education and social programs.

Ontario needs to leverage much more value-added manufacturing from its rich mineral resources like South Africa and Finland. The Ring of Fire will create thousands of mining, transportation and supply and service jobs. But thousands of additional, well paying, value-added jobs could be secured if Ontario successfully attracts one or more stainless steel mills.

In fact, due to the enormity of the chromite resources, combined with the right policy initiatives – including subsided power rates as Ontario’s electricity prices are almost double those in Manitoba and Quebec – it is not inconceivable that a cluster of ferrochrome furnaces and stainless steel mills could locate in Thunder Bay, similar to the many aluminum smelters and refineries in Quebec’s Saguenay region.
Premier Wynne needs to form a “stainless steel working group” whose mandate is to ensure that the global stainless steel giants establish one or more manufacturing plants in Thunder Bay to take advantage of one of the richest deposits of chromite ore on the planet.

And over the long-term, Ontario’s government should aim to duplicate Finland’s mining/industrial policies to ensure that not one pound of chromite ore will be exported out of this province except in the form of stainless steel.

Anything less would be nothing but “chromite crumbs” for Ontario.

Stan Sudol is a Toronto-based communications consultant and mining analyst who owns/edits www.republicofmining.com