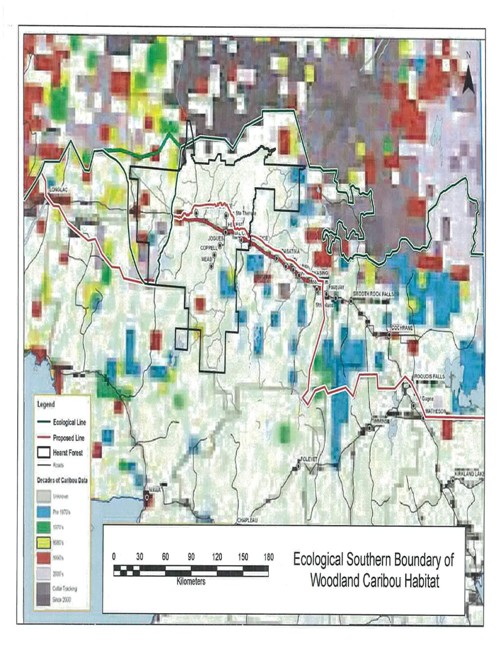 Hearst is a small community of approximately 5,600 people, located in northern Ontario, 935 kilometers north of Toronto http://www.hearst.ca/. The community is primarily dependent on the forestry sector. For a short history of the community, click: http://www.scierieshearst.com/indexEn.html.

•Despite previous concerns voiced by municipalities and their associations that point out weaknesses and omissions in Ontario’s Woodland Caribou conservation strategy, and despite our numerous collective attempts at dialogue and at becoming involved as partners in the formation of this recovery strategy, it is evident that nothing has changed in government policy or in Ontario’s direction towards regulation that to will ensure the survival of Northern Ontario communities alongside this threatened species

•Forest-based industries and/or mining are the lifeblood of the vast majority of Northern Ontario communities, but no socio-economic analysis has been undertaken to determine the potential impact of the caribou conservation strategy on such industries and Northern communities – yet Ontario is intent on forging ahead with habitat protection regulations

•Regulations will be based on the conservation plan and recovery strategy, even though parts of both plan and strategy remain in dispute and the science has yet to be completed

•Of particular concern is the future implementation of a regulation that must necessarily coincide with the location of the southern boundary of the animal’s range of “continuous distribution” across Northeastern Ontario, because OMNR’s placement of this boundary is not correct and does not represent the ecological boundary that is supported by reliable documented sightings and current science (refer to attached map)

•Standard for both plan and strategy is to be “science-based”, but science of caribou in Northeastern Ontario is dated and sparse at best: current information from a local joint-study indicates that the woodland caribou are likely not indigenous to the Great Claybelt, which certainly raises doubt with the conjecture that a significant portion of the Hearst Forest is within the area of continuous caribou distribution

•Proposed 3 zone approach is heavy-handed and will automatically place 180,000 hectares (15%) of the Hearst Forest within a “Protection Zone”, thus creating an age class imbalance in the forest inventory, which local industries depend upon for continuous and long term wood supply

•Available information from the EBR implies that a permit will be mandatory for harvesting in a Protection Zone in addition to an approved FMP, thereby placing additional burdens on local wood industries with added costs, time delays and exposing operations and plans to excessive and often unfounded objections – even as these industries face enormous challenges in the global market and struggle with a continuing recession

•With so many of the necessary elements missing: up to date and irrefutable science; Aboriginal traditional knowledge; and socio-economic analysis – the implementation of regulations to protect caribou habitat can only be considered premature

•Pressing need to establish a regulation before Federal intervention is understandable, but the urgency to establish protection zones is not, given that other elements of the conservation plan remain worrisome e.g. what factors will be considered for the cumulative impact analysis, how will the diversity of the Boreal Forest ecosystem be maintained and enhanced if the caribou insurance policy is activated?