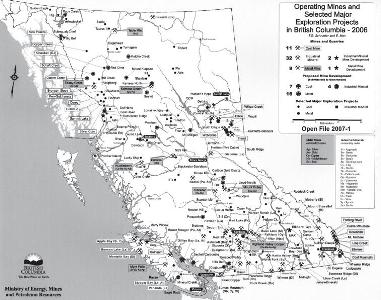 But it was not until 1962, when Bethlehem Copper was bankrolled by Japanese industrialists, that the province saw its first profitable low-grade copper-molybdenum mine up and running. Twenty-four years later Bethlehem and Lornex mines were combined to form Highland Valley Copper.

Kemess South is a fly-in operation in the delightfully named Toodoggone area in northern British Columbia. The mine is a copper-gold open pit with a 52,000 tonnes-per-day mill. The deposit was located in the early sixties and is now owned by Northgate Minerals. The concentrate is trucked 380 kilometres to a rail spur at Mackenzie and then shipped all the way to the Horne smelter at Noranda, Quebec. So far the mine has processed 145.0 million tonnes grading .20% copper and some gold and silver as by-products. The south pit will likely be mined out by 2008; the north pit will still provide feed for some years to come.

In west central B.C., 123 kilometres southwest of Houston, the Huckleberry copper mine is owned by Imperial Metals and three Japanese smelting companies. It went into production in 1997 after having been discovered thirty-five years earlier by Kenneco. Extensive stream sampling gave the best clue to copper mineralization on the site.

The feed from the open pit is put through the mill at an average 19,500 tonnes per day. By the end of 2006 36.0 million tonnes had been mined at 0.95% copper and .01% molybdenum. South of Huckleberry, Gibraltar Mine is in the Cariboo ranching region near Williams Lake. The current mine opened in 1972. The property closed in 1992 due to low metals prices and was acquired by Taseko Mines which reopened the open pit and plant in 2004. Gibraltar has mined 3.5 million tonnes of .32 % copper and .81% molybdenum to the close of 2006. Current mine life is projected until at least 2016.

The deposit of Island Copper, a Vancouver Island property of BHP Billiton, was discovered in the late sixties by prospectors following aeromagnetic survey results from work done by the B.C. Department of Mines and the Geological Survey of Canada. From 1971 to 1995, the mines produced 366.7 million tonnes grading 0.37% copper, 0.011% molybdenum as well as 0.1 grams of gold per tonne and 0.80 grams of silver per tonne. The mill treated 50,000 tonnes per day and was a world pioneer in waste disposal.

The mine used ‘engineered’ submarine tailings disposal. Nearly 360 million tonnes of fine ground tailings were placed on the sea floor without adverse effects on benthic life.

Imperial Metals held a big celebration when the Mount Polley open pit mine was reopened in 2005. Originally constructed in 1997, the mine located in south central British Columbia northeast of Williams Lake, had closed four years later due to low metals prices. Production to 2006 was 50.0 million tonnes of 0.22% copper.

Scheduled for start up in 2008, the Red Chris copper gold project has involved $228 million in costs but should produce 110 million pounds of copper and 75,000 ounces of gold in its first five years. Imperial is looking to acquire current Red Chris owner bc Metals.

The jewel in the B.C. porphyry copper crown is the Highland Valley camp which includes Valley Copper, Lornex, Bethlehem and the original Highland Bell. The combined operation is huge although very low grade and the Teck Cominco property which gives its name to the camp is the largest metal mine in the province. One of the largest open pit copper complexes in the world, Valley Copper is situated 75 kilometres west of Kamloops. From 1995 to 2005 Valley Copper produced 350 million pounds of copper per year plus between 3 and 10 million pounds of molybdenum per year.

The mill has exceeded 160,000 tonnes per day although the average is 139,000 tonnes. Currently Highland Valley Copper is the fifth largest producer of copper concentrate in the world. Teck Cominco is spending $300 million to extend the life of the mine until at least 2019. Output from all producing mines at the Highland Valley camp since 1949, when Highland Bell opened, has totalled 1,250 million tonnes of ore grading 0.41% copper and .007 % molybdenum.

Molybdenum can also be the principle metal within porphyry. Geologists usually find the element in copper porphyry, the source of 60% of the deposits and obtain it as a by-product or occasionally by itself in the host rock. The soft metallic silvery white mineral is often found in foliated masses like mica. Moly is used in construction steel, stainless steel and in the so-called super alloys but its use is now in demand in the construction of fuel cell vehicles.

Michael Barnes is a published Canadian author who has written extensively on Northern Ontario. [email protected]