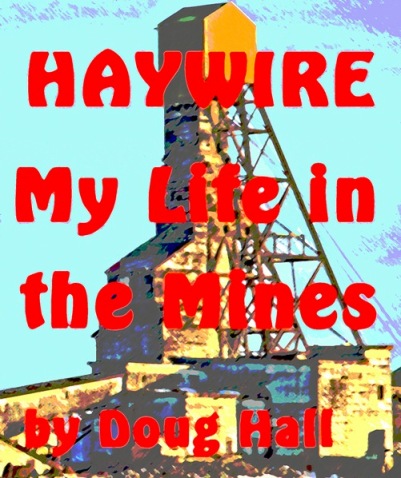 Click here to order an e-book of “Haywire My Life in the Mines”:http://www.smashwords.com/books/view/269905

One time I worked overtime taking a scooptram underground. Now this was an ST12 scooptram and very much too large to be taken down in one piece; so they took it apart and took it down in three pieces which were the bucket, the front section and the motor section. Now in order to facilitate this they made a rack with wheels on it to go down the shaft and the section of the scooptram that was being transported was slung underneath this rack by what I recollect were two three-eighths inch cables.

Now in order for the section of scooptram being transported to be taken out of the shaft once it got down to the level both of these three-eighths inch cables had to be attached. And wouldn’t you know it, when the motor section of the scooptram, the heaviest section, got down to the level there was only one three-eighths inch cable attached. Well like I said, the other cable had to be attached before it could come out of the shaft and sending it back up to surface wasn’t an option, so they put a plank across the shaft and someone had to walk out on that plank with the ST12 motor section hanging above their head by just one three-eighths inch cable and reach up and attach the other cable which was just hanging there loose.

And that was when the Shift Boss turned to me and said, “Hall, you’re a single man, get out there.” Falling off the plank wasn’t so much of a problem because there was a bulkhead made out of five inch timbers about fifteen or twenty feet below me, so I wouldn’t have fallen that far. But if that one three-eighths inch cable holding up the heaviest section of the scooptram had ever broken or if the hoistman had made a mistake I would have been toast.

To attach the cable I had to turn the bolt on a u-clamp. The Shift Boss was watching me and when I had made just a couple of turns he was screaming at me to get out of there. There probably aren’t too many people around who have been given extremely dangerous jobs in industry because they were single men. Father was working there that day. He never said anything.

One time I always remember was when one of the scooptrams was leaking oil from the hydraulic hoses. The mechanic was in there beside the tires having a look and being the bright-eyed bushy-tailed guy that I was, I decided I should be in there having a look as well. So there I was looking at leaking hydraulic hoses on a scooptram and standing right beside a tire that was just as tall as I was while I was looking. But then some little warning bells went off in my head and I said to myself that I didn’t think that was just the best place to be standing, right beside a tire that was a tall as I was and so I got the heck out of there.

Just after I got out the scooptram driver stood up in his seat and his lampcord got caught in the gearshift lever as he stood up. At this the scooptram lurched backwards about ten feet and slammed into the side of the drift. I guess I would have been under that tire if I hadn’t gotten out of there. You just never know. How many of my nine lives am I up to now?
A friend of mine was killed in a mining accident one time. There were three of them, all people I knew, and none of them had even a smidgeon of mining experience but somebody hired them to sink a shaft and they were just collaring the shaft when the accident took place. Now I would like to know what maniac would hire three totally inexperienced people to sink a shaft. One of these guys was a pretty good talker and I can only imagine that is how they got hired.

Shaft sinking is probably the most dangerous job in the mines. I remember years ago when a company named Redpath sunk the Creighton number nine shaft which, at 7200 feet, was the deepest shaft in the western hemisphere at that time. They managed to do it without loss of life and that was considered in the mining industry to be quite a feat.

Anyway it was kind of a sad case. The chap had just gotten engaged. He lived for a week in the hospital before he died. One of the nurses told him one night that he was “just waiting there to die”, and he phoned his parents the next morning, crying. I went to see him later that afternoon though and he didn’t seem to be in too bad of spirits. He didn’t mention to me though that they had told him the night before that he was going to die. He died the next morning. If a man is going to die I guess he has a right to know but I always thought that nurse was pretty damn miserable.

Well I should have kept my damn stupid mouth shut but I blurted out, “Well, I don’t weigh enough to go underground”. I guess the interviewer didn’t give a damn despite the fact that I had quite a lot of underground experienced and at that point he just put me on surface at the Copper Cliff mill.

This did not work out too well. First of all the Copper Cliff mill worked around the clock seven days a week. And they were working a continental shift, which pretty much meant you had to work across the weekend. If I remember correctly you got one Saturday night off per month and once per month you got a Sunday, Monday and Tuesday night off which wasn’t much good to a young single man full of piss and vinegar. It also seemed to me that because of the way the shifts were set up, one spent most of his days off work sleeping. Anyway as I said, I was a young single man and as far as I was concerned these shifts were beyond crazy. I guess I should have gone underground where Inco at that time only worked from Monday to Friday.

Another problem was that I had no concept of the seniority system of bidding for jobs. When I worked for the contracting company underground I pretty much just did what they told me to do and I had no reason to think that it would be any different at Inco. The concept that a person might get an easier and easier job as he got more seniority was foreign to me. And I would also have to say that the jobs in the mill were mind numbingly boring. At least underground one had the excitement of the very real possibility that he could become deceased at almost any time.

I had a little run in with one of the supervisors while I was in the mill. He gave me a job looking after this finely crushed ore that was being dribbled down into some sluice boxes and then into the mills. I had to make sure everything was running freely in this system and nothing was hung up. In retrospect it was a pretty good job and anybody except me probably would have been happy to keep his mouth shut and just do it. But for me, I managed to figure out that I could make one round of the system in about twenty-five minutes and when I went back the next time everything was still running free.

So it seemed to me that I could take five minutes of every round sitting outside the mill and there would not be any problem when I went on my next round. And this brief respite outside would give me some relief from the noise of the mills. Well that lasted until the supervisor caught me sitting outside and summarily ordered me back inside. I was pretty unhappy about that because I knew the job was being done in a perfectly logical manner and to be blunt was being done well. I would have to say that that became a recurring theme in my working life. If my job was being done well, I expected supervisors to leave me alone.

On top of that, in my opinion, the pay was no hell at Inco at that time. It was $3.25 per hour and I still recall that after your deductions were taken off you cleared exactly one hundred dollars per week. Even in 1970 that wasn’t, in my opinion, the best pay in the world. Of course in later years Inco did start to pay good money and an excellent pension for those who stayed. I guess when the orebody is under your feet it isn’t so easy to move to a new location where labour costs are lower as happened to so many industries in Southern Ontario as a result of Free Trade and Globalization. Too bad I didn’t have a crystal ball.

Anyway, hindsight is a hundred per cent. To this day my brother likes to get in a little dig at me regarding how I quit Inco. Maybe if I had gone underground for Inco, I might have stayed but I have no regrets about quitting the mill. And like I said I was working with the information I had at the time. For a few years (and just a few years) jobs were plentiful for those on the leading edge of the baby boom. To my mind there was a feeling of optimism in the country at large, and I don’t think that many including myself saw the changes that were coming and how difficult it would become to find a good job.

Click here to order an e-book of “Haywire My Life in the Mines”:http://www.smashwords.com/books/view/269905