The country’s top economists are in agreement. Saskatoon will continue to lead economic growth in Canada through 2013.

The Conference Board of Canada, known for its conservative economic forecasts, says that Saskatoon’s economy will expand by 4.1 per cent this year, and will remain at the top of the economic growth leader board through 2013.The gap between Saskatoon and second place Calgary is quite significant, with Calgary’s economy expected to grow by 3.4 per cent.

What factors are contributing to Saskatoon’s sustained economic growth?

According to the Conference Board of Canada announcement, “Saskatoon is benefiting from strong resource development, while healthy population growth is bolstering the housing market.” END_OF_DOCUMENT_TOKEN_TO_BE_REPLACED

The Globe and Mail is Canada’s national newspaper with the second largest broadsheet circulation in the country. It has enormous influence on Canada’s political and business elite. Brenda Bouw is the Globe and Mail mining reporter.

A battle is shaping up between global mining giant Rio Tinto PLC and Canada’s Cameco Corp. over a promising uranium explorer in Saskatchewan, with Cameco under pressure to win as it seeks to double production of its single resource.

London-based Rio has struck a friendly deal to buy Hathor Exploration Ltd. for $578-million or $4.15 a share, topping Cameco’s hostile offer of $3.75 a share made in late August.

The companies are vying for control of Hathor’s assets in the uranium-rich Athabasca Basin of Saskatchewan, where about 20 per cent of the world’s uranium is produced. Both bids come as the price of uranium, used to fuel nuclear power plants, struggles to recover from a slump since the nuclear crisis in Japan last March caused many countries to re-examine their nuclear power programs.

With the long-range belief that nuclear energy will expand in key growth countries such as China and India, Rio is looking to expand its existing uranium operations in Australia and Africa. Its offer for Hathor is the first Rio has made for a Canadian company since its ill-timed purchase of Montreal-based aluminum producer Alcan in 2007, on the eve of the global recession. END_OF_DOCUMENT_TOKEN_TO_BE_REPLACED

• Rio Tinto to make an all-cash offer for all the common shares of Hathor for C$4.15 per common share, representing a premium of more than 55 per cent to Hathor’s unaffected closing price on 25 August 2011.

• Hathor directors and senior management have entered into lock-up agreements with Rio Tinto and have agreed to tender all of their common shares to the Rio Tinto offer.

• The acquisition of Hathor bolsters Rio Tinto’s global uranium strategy and complements its current exploration programmes in Saskatchewan and its uranium operations elsewhere in the world. END_OF_DOCUMENT_TOKEN_TO_BE_REPLACED

Founded in 1928, Canadian Business is the longest-publishing business magazine in Canada.

SASKATOON – The world’s biggest miner says there is the potential for several new potash mines to be built in Saskatchewan, but it’s taking a measured approach an ambitious dream.

BHP Billiton has about 14,500 square kilometres of land in the Prairie province and thinks there’s the potential for about five more mines.

“We’ve got a great land position in Saskatchewan . . . and we’re exploring that as fast as we can to make sure that we understand the resource that we have available to us,” Chris Ryder, vice-president of external affairs for BHP in Canada, said in a phone interview Wednesday.

BHP, a British-Australian company with global operations — including diamond and potash businesses in Canada, is currently developing its Jansen mine in Saskatchewan and hopes to start producing potash in 2015. END_OF_DOCUMENT_TOKEN_TO_BE_REPLACED

The Globe and Mail is Canada’s national newspaper with the second largest broadsheet circulation in the country. It has enormous impact and influence on Canada’s political and business elite as well as the rest of the country’s print, radio and television media. Brenda Bouw is the Globe’s mining reporter.

VANRHYNSDORP, SOUTH AFRICA, VANCOUVER – Filled with radioactive waste, its buildings gutted and crumbling after 48 years of disuse, the abandoned Steenkampskraal mine would seem to hold little value to anyone.

Until recently, the decaying apartheid-era mine in a remote patch of South African desert was mainly of interest to scientists studying the effects of high radiation on the thousands of bats that hibernate in the empty mine shaft.

But soon the bats will be evicted, the radioactive waste will be buried and the shaft refurbished. The Canadian owners of this mine are scrambling to tap the mine’s rare-earth minerals – possibly the hottest commodity on the planet these days, with immense strategic and technological significance, and pivotal to a global geopolitical rivalry.

As prices soar, there is a frantic global rush to develop new sources of rare earths. These obscure minerals – 17 different elements with futuristic names such as neodymium, samarium, yttrium and lanthanum – are crucial for everything from guided missiles and hybrid cars to flat-screen televisions, iPods and BlackBerry phones. END_OF_DOCUMENT_TOKEN_TO_BE_REPLACED

May 24, 2011 in Canada Mining, Saskatchewan Mining

Working for the government and as a consultant, he helped big players develop a new industry

Harold Morrow’s involvement in early mining exploration first led him to the gold mines of Northern Ontario, but it was in the Devonian layers of sedimentary rock found in Saskatchewan that he discovered a real find.

An area once entirely under ancient seas was uniquely rich in deposits of potassium chloride – or potash, as it is now commonly called, which is used almost exclusively in fertilizers. What started out as the “gold bug” quickly became the “potash bug,” and Morrow became a leading consultant in how to find it.

He was so successful at discovering deposits that in 1966 he was named “Mr. Potash” by the editor of the Northern Miner newspaper. END_OF_DOCUMENT_TOKEN_TO_BE_REPLACED

Miners have started engaging the aboriginal communities on whose land they dig. But is it enough?

Leanne Bellegarde tries to connect communities. She’s a member of the Kawacatoose First Nation in Saskatchewan, a lawyer, and now, the director of aboriginal strategy for PotashCorp.

Native people are the youngest and fastest growing demographic in Saskatchewan. PotashCorp, a global potash producer in the province, projects it will need 800 new workers over the next two years, thanks to expansion and retirements.

But what should be an ideal match – people wanting jobs and a company needing workers – presents deep challenges. Many jobs at PotashCorp require Grade 12 or equivalency. Ms. Bellegarde says it’s difficult to find people who meet that bar in First Nations and Métis communities. And so the jobs often go to qualified outsiders, frustrating aboriginal people.

PotashCorp is one of many mining companies in Canada that realize engagement with native communities isn’t just a feel-good enterprise but an economic growth strategy. But while this engagement goes far deeper than in the past, some say it’s just the beginning of what’s truly needed. END_OF_DOCUMENT_TOKEN_TO_BE_REPLACED 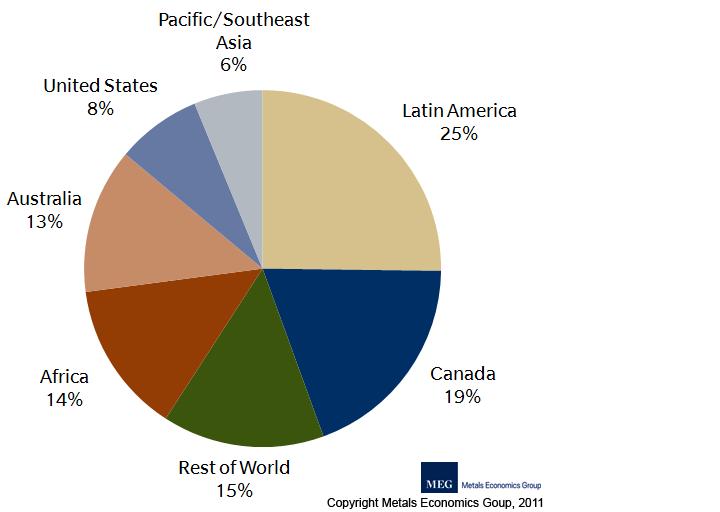 Four provinces—Ontario, Quebec, Saskatchewan, and British Columbia—accounted for more than three-quarters of the $2.2 billion in planned Canadian nonferrous exploration spending in 2010. Of the 710 companies that planned to explore in Canada in 2010, 90% were based in Canada, together contributing 79% of the planned Canadian nonferrous exploration total. Worldwide, Canadian-based companies accounted for more than half of the 2,200+ active explorers covered by the 2010 edition of CES, and together accounted for 41% of the 2010 global exploration budget total. END_OF_DOCUMENT_TOKEN_TO_BE_REPLACED

Stephen L. Masson, M.Sc. P.Geo. is the President, of the Manitoba-Saskatchewan Prospectors and Developers Association

“Saskatchewan has now become a “have” province based on the enormous revenues of its mining industry plus oil and gas, whereas Manitoba struggles despite the huge mineral potential of the province.” Stephen L. Masson (December, 2010)

Another year of good metal prices but lower exploration costs has made for continued strength in the mineral exploration of Manitoba and Saskatchewan, but far more in Saskatchewan than Manitoba.

Soaring gold has made it possible for even small juniors to fund their projects at whatever stage. Uranium in Saskatchewan and Rare Earth metal exploration in both provinces remains strong. Nickel exploration in the Thompson Nickel Belt continues at a good pace, although the shut-down of the Bucko Lake Mine offered a small wrinkle in this otherwise promising historic exploration real estate.

The Snow Lake, Flin Flon, and Sherridon Camps saw continued strong exploration, riding in part on the coattails of the huge Lalor Lake Zn-Cu-Au discovery in the Chisel basin of Snow Lake. Hudbay Minerals is now proceeding towards development of this large and very rich deposit. Continued success by Hudson Bay and VMS on the Reed Lake deposit promises a near surface deposit rich in copper, with a recent hole reporting 6.69 per cent copper over 71.69 m.

Flin Flon continues to dominate the Copper-Zinc news as one of the great mining camps in this country, which remarkably continues to turn out discoveries and world class deposits. Halo continues to increase its inventory of Copper Zinc in the Sherridon Camp and Rockcliff, along with VMS, Callinan, and Copper Reef, which are aggressively exploring in the Snow Lake and main Flin Flon Camps. END_OF_DOCUMENT_TOKEN_TO_BE_REPLACED