The Toronto Star has the largest circulation in Canada. The paper has an enormous impact on federal and Ontario politics as well as shaping public opinion.

In Collapse of Dignity, Napoleon Gomez Urrutia reveals much about Mexico’s corrupt mining sector – but what about himself?

Will the real Napoleon Gomez Urrutia please stand up? About 66 years old and living in exile in Vancouver, the Mexican labour leader has trod many different paths during a long, eventful career, and now he has written a book about that journey.

Titled Collapse of Dignity: The Story of a Mining Tragedy and the Fight Against Greed and Corruption in Mexico, the densely written volume recently scaled its way into the Top 10 on The New York Times list of non-fiction bestsellers, an impressive achievement by any measure and all the more so in this case because a good deal of the book is at least somewhat fictitious.

It’s also pretty hard slogging for much of its 368-page length. Still, the good parts are engrossing, and they centre on a mining disaster – or, really, two mining disasters. One of these mishaps took place in northern Mexico, on Feb. 19, 2006, and it was an unmitigated catastrophe.

Sixty-five men lost their lives after a huge explosion hit the Pasta de Conchos coal mine in the early hours that day. END_OF_DOCUMENT_TOKEN_TO_BE_REPLACED

JOHANNESBURG – (Reuters) – A British court has thrown out a lawsuit against Anglo American South Africa brought by miners who contracted the deadly lung disease silicosis when they worked in South Africa, saying it did not have jurisdiction to hear the matter.

A lawyer for the 2,336 miners said on Wednesday many of them planned to file papers in the next few days in South Africa seeking damages against the South African unit of the global mining giant.

“Anglo American South Africa believes that the court correctly found that the English court does not have jurisdiction to hear this claim,” said Anglo American spokesman Pranill Ramchander.

Anglo American (AAL.L), which switched its headquarters from Johannesburg to London in 1999, no longer has gold mines in South Africa but the lawyers said its Johannesburg-based unit still had assets of around $15 billion (9 billion pounds).

“Today’s ruling was a pyrrhic victory for Anglo American, which as the largest gold mining company over the past 50 years still has to face compelling claims by thousands of miners affected by dust-related lung diseases,” said Richard Meeran of Leigh Day, which is representing the miners. END_OF_DOCUMENT_TOKEN_TO_BE_REPLACED

28 fatalities, the loss of millions of pounds of copper and thousands of ounces of gold, as well as creating a new oil & gas subsidiary, slammed FCX’s 2Q.

RENO (MINEWEB) – The tunnel collapse in a Freeport-McMoRan Copper & Gold training facility in Indonesia “was an incredibly horrific convergence of events that came together because of the geology of the rock and the influence of water and air on our ground support facilities, and unfortunately just happened as we were having this training meeting,” CEO Richard Adkerson told analysts during a conference call Tuesday.

On May 14th, the accident occurred at PT Freeport Indonesia, which resulted in 28 fatalities and 10 injured when the rock structure above an underground ceiling for a training facility collapsed in an unprecedented and unexpected event. While the accident occurred outside of mining operations, mining and processing activities at the Grasberg complex were temporarily suspended as Indonesian government authorities also conducted inspections. 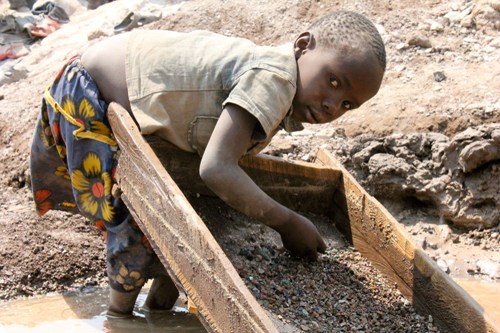 “Mining is one of the worst forms of child labour. The heavy work can permanently damage a growing child’s bones and muscles. Minerals mined are often hazardous and exposure to uranium and mercury can have profound health effects. Falling down open mine shafts, being trapped or injured by collapsing tunnels, or drowning while mining underwater are all serious threats. (CNW Group/World Vision Canada)”.

MISSISSAUGA, ON, June 10, 2013 /CNW/ – Growing numbers of Canadians are willing to pay more for products that are free of child labour, according to a poll released just prior to the World Day Against Child Labour (June 12). Eighty-nine per cent of Canadians said they would pay more, up from 68 per cent last year. Canadians said they would pay on average 23 percent more to guarantee a purchase is child-labour free—this is double the amount they said a year ago.

World Vision is a Christian relief, development and advocacy organisation dedicated to working with children, families and communities to overcome poverty and injustice. http://voices.worldvision.ca/home/

Child labour is a highly complex problem interlinked with poverty, a lack of social services and alternative employment, education and health impacts, and exploitation. The challenge we have is to understand the specific circumstances and needs of working children and their families, in particular settings. From there, we can develop appropriate and effective solutions that address these circumstances and needs, and sustainably move children out of the worst forms of labour. Simplified calls to eradicate all child labour often ignore the complexity of the problem, the persistence of poverty, and the difficult choices children face.

Child miners in one community in the DRC’s southern Katanga province speak to this reality throughout this report. A key objective for the research was the direct participation by children. They themselves described the circumstances, impacts and drivers of their work as miners, as well as possible solutions to the challenges they face. This was then compared to, and supplemented by, parents, other community members, and mining stakeholders.

By listening carefully, we heard that: END_OF_DOCUMENT_TOKEN_TO_BE_REPLACED

The Toronto Star has the largest circulation in Canada. The paper has an enormous impact on federal and Ontario politics as well as shaping public opinion.

World Vision has documented the voices of children kept out of school to work in a copper and cobalt artisanal mine in the southern Democratic Republic of Congo and has found that “this type of hard labour is robbing children of their childhood.”

Child labour in developing world garment factories is a tragic, known occurrence but a new report on children as young as eight toiling away in African mines sheds light on a forgotten group. World Vision, a Christian relief organization, documented the voices of children kept out of school in order to work in a copper and cobalt artisanal mine in the southern Democratic Republic of Congo.

The key goal of this project, entitled “Child Miners Speak,” was to build trust and talk specifically to children to ask them how they feel about working in the harsh conditions of the mines, said Harry Kits, World Vision’s senior policy adviser for economic justice.

“This type of hard labour is robbing children of their childhood,” Kits said in an interview Thursday.

After speaking with 50 children in Kambove, aged eight to 17, World Vision documented children ill with various infections from working in polluted water or being exposed to mercury or uranium. END_OF_DOCUMENT_TOKEN_TO_BE_REPLACED

The death toll from a collapsed tunnel at Freeport-McMoRan Copper & Gold Inc.’s (FCX) Grasberg complex reached 28 as Indonesia said it would review all mining operations following one of its worst mining accidents.

The rescue team recovered the remaining bodies that were buried at the accident site of the world’s second-largest copper mine, Thamrin Sihite, director general of coal and minerals at the Energy and Mineral Resources Ministry, told reporters today in Jakarta. Operations at the mine in Mimika, Papua province, about 3,120 kilometers (1,940 miles) east of Jakarta, will remain suspended until after an investigation is concluded, the government said.

President Susilo Bambang Yudhoyono ordered related ministries to review safety at all mines in Indonesia, Sihite said earlier. Phoenix, Arizona-based Freeport, which got 20 percent of its operating income from Indonesia last year, was still shipping material produced from the mine as of May 17, its local unit said last week.

Ten workers have been rescued from the site, Freeport said today. The “Freeport accident is one of the worst mining accidents in Indonesia,” Sihite told reporters in Jakarta today. “I don’t want this to happen again.” END_OF_DOCUMENT_TOKEN_TO_BE_REPLACED

The head of Freeport Indonesia said he would travel to the remote West Papua site later on Wednesday to assess rescue operations and decide on when to resume production at the Grasberg mine, which also holds the world’s largest gold reserves.

Thirty-nine workers were attending an underground training class near the mine when a tunnel collapsed on them early on Tuesday morning, the company said. Rescue crews evacuated 14 people, four of whom died, the company said.

The Grasberg mine, which employees more than 24,000 workers, was not significantly affected, but production was suspended to pay homage to those involved in the accident.

“There is no direct impact on our operation but as a sign of sympathy we have suspended the operation,” Rozik Soetjipto, president director of Freeport Indonesia, told reporters. “I will go to the site tonight and from there we can decide what is the next step.”

Rescuers were using jacks, saws and other hand tools to free the remaining workers, as the tight space in the collapsed underground tunnel prevented them from using heavy earth-moving equipment, the company said. END_OF_DOCUMENT_TOKEN_TO_BE_REPLACED

KHARTOUM – Around 100 miners are estimated to have died inside a collapsed gold mine in Sudan’s Darfur region, and nine of the rescuers trying to free them have become trapped as well, a miner said Friday.

“Nine of the rescue team disappeared when the land collapsed around them” on Thursday said the miner, who had visited the scene.

The unlicensed desert gold mine in the Jebel Amir district, more than 200 km northwest of El-Fasher, the capital of North Darfur state, began to cave in Monday.

The stench of death is now seeping out of the baked earth, the miner said. “Yesterday (Thursday) eight bodies have been found and still they are looking for the others,” he said. “According to a count by people working in the mine, the number of people inside is more than 100.”

On Thursday, the Jebel Amir district chief, Haroun al-Hassan, said “the number of people who died is more than 60,” but added it was unclear whether anyone might still be alive. END_OF_DOCUMENT_TOKEN_TO_BE_REPLACED

The mining industry has made great strides toward establishing workplaces that are safe and healthy for employees. We almost take for granted our computer-assisted, automated and equipment-enabled jobs. For many in the mining and exploration sectors, helicopters are the only transportation that can reach remote locations. For some a trip on a “chopper” is as routine as tying on their boots.

But sometimes technology lets us down. The technology that allows modern helicopter to fly so that drill crews can reach remote sites failed last week, and people died.

One crash happened near Alice Arm about 150 km north of Prince Rupert, B.C. Four passengers lost their lives. Dead are the pilot David Jeffrey Reid of Sidney, B.C., two employees of Bodnar Drilling, Walter Bodnar and his nephew Nicholas Bodnar (both of Rose du Lac, Manitoba). Also killed was a prospector, Frank Moehling of Calgary. They were headed to the Homestake Ridge property belonging to Bravo Ventures.

The Hughes MB500 helicopter that went down on Aug. 6 belonged to Prism Helicopters of Pitt Meadows, B.C. It was chartered by Vancouver’s Bravo Venture Group that is testing its Homestake Ridge copper-gold property.