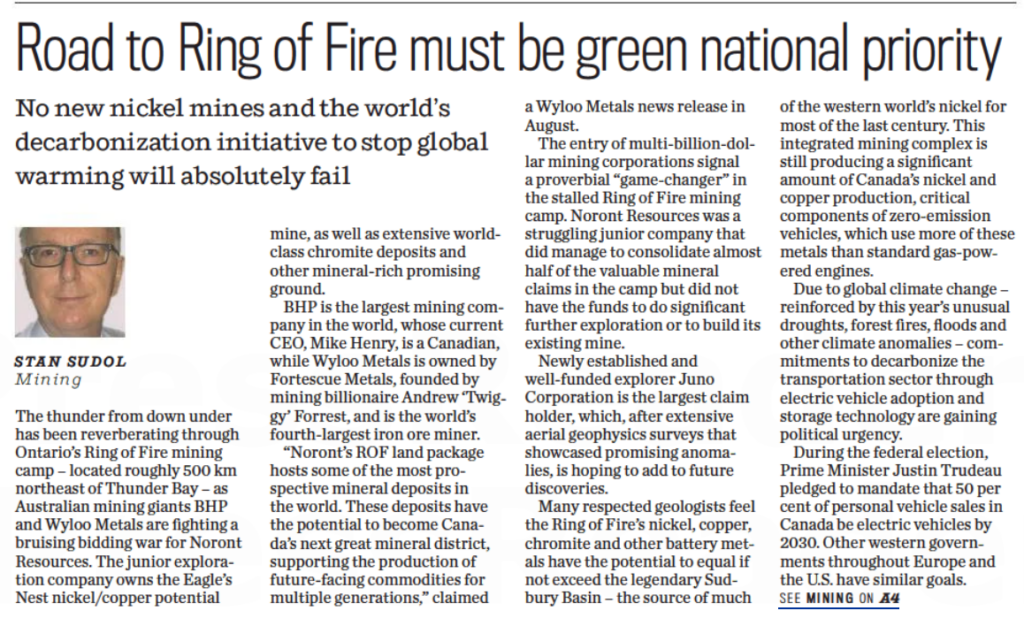 The thunder from down under has been reverberating through Ontario’s Ring of Fire mining camp – located roughly 500 km northeast of Thunder Bay – as Australian mining giants BHP and Wyloo Metals are fighting a bruising bidding war for Noront Resources. The junior exploration company owns the Eagle’s Nest nickel/copper potential mine, as well as extensive world-class chromite deposits and other mineral-rich promising ground.

BHP is the largest mining company in the world, whose current CEO, Mike Henry, is a Canadian, while Wyloo Metals is owned by Fortescue Metals, founded by mining billionaire Andrew ‘Twiggy’ Forrest, and is the world’s fourth-largest iron ore miner.

“Noront’s ROF land package hosts some of the most prospective mineral deposits in the world. These deposits have the potential to become Canada’s next great mineral district, supporting the production of future-facing commodities for multiple generations,” claimed a Wyloo Metals news release in August.

The entry of multi-billion-dollar mining corporations signal a proverbial “game-changer” in the stalled Ring of Fire mining camp. Noront Resources was a struggling junior company that did manage to consolidate almost half of the valuable mineral claims in the camp but did not have the funds to do significant further exploration or to build its existing mine.

Newly established and well-funded explorer Juno Corporation is the largest claim holder, which, after extensive aerial geophysics surveys that showcased promising anomalies, is hoping to add to future discoveries.

For the rest of this column: https://www.thesudburystar.com/opinion/sudbury-column-road-to-ring-of-fire-must-be-green-national-priority