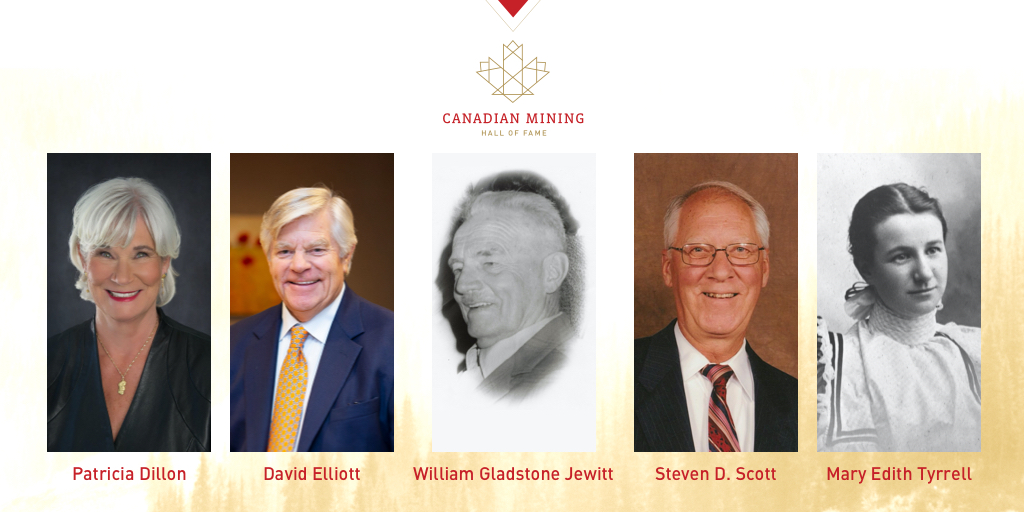 TORONTO, OCTOBER 22, 2020 – The Canadian Mining Hall of Fame (CMHF) will welcome five extraordinary individuals who have made incredible and lasting contributions to Canada’s mining industry:

Over the past 33 years, the CMHF has recognized 190 exemplary men and women who helped build Canada’s mining industry into the global leader, embodied the important role mining plays in Canadian society and inspired future generations in mining. While the global pandemic has altered plans for the Annual Dinner & Induction Ceremony, the CMHF remains steadfast in its vision to be the enduring source of information that shares the significant contributions of individuals who shape Canada’s global mining industry.
“Canadian mining leaders set the standard for the global industry and these five inductees reflect the very best of mining excellence, determination and contribution to community,” said Pierre Gratton, Chair of the Canadian Mining Hall of Fame and President & CEO of the Mining Association of Canada (MAC). “As exceptional leaders and champions of our industry, each of the inductees were instrumental in growing our sector. They have endowed us with a positive legacy that continues to thrive today.”

One hundred years ago, Edith Tyrrell encouraged mining to become more inclusive. Much more recently, Pat Dillon relentlessly navigated our sector through social change and toward a more sustainable future. David Elliott was a stalwart champion of junior mining, even in tough times, and an early supporter of diamond discoveries in Canada. As “eyes in the skies” for aerial prospecting, Bill Jewitt also carried out emergency flights under difficult conditions, venturing to places no aircraft had ventured before. And Steve Scott championed the concept of open and accessible science.

The CMHF is fortunate to celebrate these individuals and their achievements through the support of Hecla Mining, our Legacy Sponsor and a leading, low-cost silver producer with over a century history as a responsible mining company, and through the support and sponsorship from many prominent organizations, including our Visionary Sponsors, Agnico Eagle Mines and Hatch and our Champion Sponsors, EY Canada, Magris Resources, Teck Resources and Yamana Gold.

The CMHF will welcome these five new members at a July 2021 gala dinner and induction ceremony. Due to the COVID-19 pandemic and the restrictions around gatherings, this event will be planned in compliance with Ontario’s Phase 3 guidelines where 100 people are permitted to meet outdoors in a business venue, with health protocols monitored and safe distancing implemented. The event will be by invitation only with no public sale of tickets. We look forward to being able to resume our Annual Dinner gathering in the future.

Patricia Dillon (b. 1952): The career achievements of Patricia (“Pat”) Dillon are unique in Canadian mining history as they encompassed leadership roles in industry associations and outreach initiatives to help the sector navigate social change and chart a more sustainable future. Dillon was born in Toronto and attended the University of Toronto, where she earned a BSc in geology in 1974, and a Bachelor of Education in 1976. Geology was not a common career choice for women at the time, but her entry position with Teck Resources evolved into a 32-year career and ultimately made her one of the best known industry leaders of the 1990s and early 2000s.

Dillon’s most enduring legacy is considered to be PDAC Mining Matters, a charitable organization that celebrated its 25th anniversary in 2019. She serves as president and CEO of the organization, which has provided educational resources promoting mineral literacy to more than 800,000 students and teachers in Canada, in English, French and several Indigenous languages. Dillon also played a leadership role in MAC’s innovative Towards Sustainable Mining® initiative, which has driven improved social and environmental performance across the sector and led to improved relations between the mining industry and its communities-of-interest. Dillon has contributed greatly to the success of the Prospectors and Developers Association of Canada (PDAC) in various capacities since 1993, including as president from 2006 to 2008. She is the recipient of the Queen Elizabeth II Jubilee medal and was recognized as one of the 100 Global Inspirational Women in Mining in 2014 by Women in Mining (UK).

David Elliott (b. 1948): David Elliott earned his reputation as one of Canada’s preeminent resource financiers by funding more than 400 exploration and development companies and supporting and mentoring a generation of mining geoscientists. As a founding partner of Haywood Securities, he demonstrated a rare ability to combine industry talent with quality projects and investment capital. Haywood grew from a small Vancouver firm with 15 employees in 1986, into one of Canada’s premier mining merchant banks with 300 employees and $10 billion of assets under management. Elliott was a stalwart champion of junior mining, even in tough times, and an early supporter of many of its greatest successes, notably diamond discoveries in Canada and the Pierina gold mine in Peru.

Elliott was born in Kingston, Ontario, and began his career as a junior programmer at the Montreal Exchange in 1968. The list of companies and people that Elliott supported over four decades is long, but includes the Bema Group, Alamos Gold, CGA Mining, Globetrotter Resources, Midas Gold, Ventana Gold, Reservoir Minerals, Fiore Gold, EMX Royalties, and Transition Metals, among others. In 2014, Elliott was presented AME BC’s Murray Pezim Award for “perseverance and success in financing mineral exploration.”

William Gladstone Jewitt (1897-1978): William (“Bill”) Jewitt has the rare distinction of being an inductee into the Canadian Mining Hall of Fame (2021) and the Canadian Aviation Hall of Fame (1978). He was a pilot and flight instructor during the First World War, a mining engineer by profession, and a senior executive of Cominco, which continues as Teck Resources. He joined Cominco in 1927 and contributed to the discovery and development of many of its mines by combining “eyes in the skies” aerial prospecting with “boots on the ground” engineering expertise. Jewitt trained company engineers and geologists to fly as part of their exploration responsibilities and also made lasting contributions to mapping and mineral exploration in Canada’s North, notably in the Northwest Territories. When Jewitt’s aviation career ended in 1954, he had personally flown the farthest-ranging and most difficult flights, some into the Arctic islands where no aircraft had ventured. He pioneered new methods of aerial prospecting and carried out emergency flights under difficult conditions.

In 1948, Jewitt was appointed manager of mines, and in 1965 became vice-president of mines at Cominco. Under his direction, Cominco modernized the Sullivan mine, then the world’s largest lead-zinc-silver mine, and developed the Bluebell, HB, Tulsequah Chief, and Coast Copper base metal mines, and Pinchi Lake mercury mine in BC; the Wedge copper mine in New Brunswick, and the Nong Bhai mine in Thailand. In 1978, he received the Order of Polaris from the Yukon government in recognition of “an outstanding role as a pioneering aviator in the Canadian North,” and “for courage in navigating the uncharted wilderness.”

Steven D. Scott (1941-2019): The oceans of the world and volcanogenic massive sulphide (VMS) deposits were sources of inspiration for Steven (“Steve”) Scott, one of Canada’s most prolific and influential geoscientists of modern times. Born in Fort Francis, Ontario, Scott attended the University of Western Ontario, and earned his BSc and MSc degrees in geology in 1963 and 1964, respectively, followed by a PhD from the Pennsylvania State University in 1968. Scott’s research helped guide exploration efforts for high-value VMS deposits in Canada and abroad. In the late 1970s, he turned his attention to “black smokers” and the genesis of seafloor massive sulphides, and ultimately became a world-famous marine scientist.

Scott was the first to recognize that seafloor deposits could be an economic resource and worked with several mining companies to pursue this goal. Scott participated in 31 oceanographic expeditions, published hundreds of peer-reviewed scientific papers, and educated students from around the world—since labelled the “Scott Diaspora.” Scott has received dozens of national and international honours over the years, notably the Society of Economic Geologists’ Penrose Medal in 2016, and the Geological Survey of Canada’s Duncan R. Derry Award in 1997.

Mary Edith Tyrrell (1870-1945): Career options for women were limited in the 1890s when Mary Edith Tyrrell was introduced into Canada’s fledgling mining industry as the young wife of Joseph Burr Tyrrell, a renowned explorer and map-maker with the Geological Survey of Canada (GSC). In 1921, she and 19 like-minded wives launched the Women’s Association of the Mining Industry of Canada (WAMIC). Members supported worthy causes that mirrored the times; war veterans in the 1920s, schools and disaster relief in the 1930s, and the war effort in the 1940s. Tyrrell served as WAMIC’s president for its first three years. WAMIC members have overseen the distribution of more than $1.8 million in charitable donations and support for students and educational institutions.

Its objectives remain to promote friendship among mining women, render service to the mining industry, and contribute to the well-being of the community. WAMIC has supported countless students over time, including women and people from underrepresented groups, and helped the mining industry in its transition from a fraternity into an inclusive community. It is fitting that a century later Tyrrell will be inducted into the Canadian Mining Hall of Fame, joining her husband who was inducted in 1997 for his career accomplishments.

About the Canadian Mining Hall of Fame

Founded in 1988 by the Northern Miner, the Mining Association of Canada, the Prospectors and Developers Association of Canada and the Canadian Institute of Mining, Metallurgy and Petroleum, the CMHF is a charitable organization that recognizes outstanding achievement in the mining industry, celebrates individual leadership and inspires future generations in mining. Members are selected through a fair, inclusive and accessible process driven by the CMHF Board of Directors and its member associations. For more information, please visit: http://www.mininghalloffame.ca