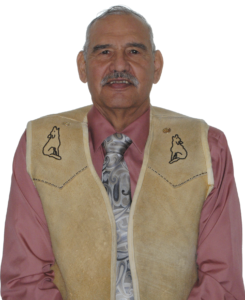 P. Jerry Asp is one of Western Canada’s most prominent Indigenous leaders and a tireless advocate for the inclusion of Indigenous Peoples in the mining industry. His leadership skills came to the fore in the 1980s, during a mineral exploration and mining boom in the “Golden Triangle” of northwestern British Columbia.

As a chief and member of the Tahltan Nation, he understood his community’s concerns about development taking place on their traditional lands. Yet having worked in the mining industry since 1965, he also recognized the potential for employment and business opportunities and to build skills and capacity in the community.

In 1985, Asp founded the Tahltan Nation Development Corporation (TNDC) as GM and became President in 1987. His goal was to negotiate partnerships between TNDC and mining companies, starting with the Golden Bear mine, which required a 100-mile access road across Tahltan territory. The concept of an Impact Benefit Agreement (IBA) was new at the time, but Asp negotiated the first IBA in the Province’s history, which included road construction and other contracts at Golden Bear.

TNDC went on to sign contracts at other mines such as Eskay Creek and Red Chris, and became the largest native-owned and operated heavy construction company in Western Canada. The unemployment rate fell to almost zero in the 1990s and has remained low as TNDC diversified to other sectors such as road maintenance, hydroelectric power lines, and “green energy” projects.

In recent years, Asp has focused on building bridges of understanding between the mining sector and Indigenous peoples and challenging misconceptions that hinder the reconciliation process. He is proud of the Tahltan’s history of mining and trading obsidian along the West Coast, and notes that his grandfather was a placer gold prospector.

Asp is a strong advocate of skills training and apprenticeship programs, a legacy of his early years as an underground miner and driller, captain of a mine rescue team, and president of the only all-native United Steelworkers’ local in North America. It was a natural progression for him to work with
government and industry to create training and economic development opportunities for Indigenous Peoples in Canada and around the world. He was instrumental in developing the Aboriginal Toolkit for Mining, which won an award from the United Nations as the best educational document of its kind in 2007.

Asp was a founding member of what became the Canadian Aboriginal Minerals Association and served as its vice-president from 1991 to 2013. In 2014, he co-founded the Global Indigenous Development Trust to help educate and build alliances between Indigenous communities and mining companies around the world. Through this program, he has shared Canadian best practices for building successful partnerships between industry and Indigenous Peoples with hundreds of Indigenous communities across 15 countries and five continents.

Jerry Asp has received many awards for his trailblazing role in helping to build inclusive relationships between the mining industry and Indigenous Peoples. In 2011, he was the recipient of PDAC’s prestigious “Skookum Jim Award” for his exceptional achievements. He was awarded the Queen Elizabeth II Diamond Jubilee Medal in 2013, followed by the Frank Woodside Past Presidents Distinguished Service Award by the AME BC in 2015. In 2017, he received the Indspire Award in Business and Commerce, the highest honour the Indigenous community bestows on its own achievers.