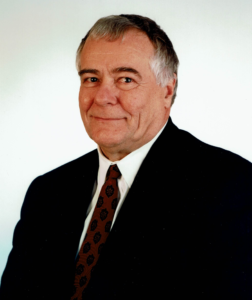 During an illustrious career spanning 50 years, Alex Balogh earned his place in a select group of industry leaders who helped shape and build Noranda and Falconbridge into two of most successful mining and
metallurgical giants in Canadian history. He has the rare distinction of contributing to the growth of both companies, starting with Noranda, which he joined at Gaspé Copper in 1954 after earning a degree in metallurgical engineering from McGill University in his home city of Montreal, Quebec.

An early achievement while a shift foreman was the development while working with others of the now-famous “Gaspé Puncher” that significantly improved the operating efficiency and working conditions of copper converters; Heath & Sherwood subsequently licensed this machine worldwide. Another first as a civic activity and initially as a hobby was the founding with R. Ford of a bilingual newspaper, “The Gaspe Peninsula Voyageur” serving the Gaspé region for over 15 years.

Balogh’s central contribution to the mining industry and to society was in the 1970s, with the introduction of Noranda’s continuous smelting and converting process at the Horne smelter in Quebec. This pioneering process having significantly improved energy and environmental efficiency,
dramatically reduced sulphur dioxide emissions, thus mitigating the “acid rain” issue, and ensured the longevity of the Horne smelter having the ability to treat a variety of feed materials as other smelters closed.

Balogh brought the same focus on responsible growth as he transitioned to executive positions at Noranda. As one of the architects, he oversaw Noranda’s investment in Falconbridge in 1989, and served as president and chief executive officer (CEO) of both companies in the 1990s. He developed several major mines during this period, notably the Raglan nickel project in Quebec’s Ungava region.

The main challenge facing the stalled project was the remote location and short window to transport concentrates to an existing smelter. Balogh supported tests by a new ice-breaking vessel, which solved the shipping problem; the mine began in 1997. He encouraged the application of innovative technology to develop and maximize the value of the giant Collahuasi copper mine in Chile, and the Antamina copper-zinc mine in Peru.

The 2005 merger of Noranda and Falconbridge set the stage for one of the world’s largest mining and metallurgical conglomerates. While a wave of industry consolidation saw the merged entity acquired by a multi-national miner a year later, the legacies of its builders and leaders live on and  continue to benefit all Canadians.

After retirement Balogh served the mining sector as a consultant, corporate director, mentor of young geoscientists, and strong supporter of industry associations and causes. In 2002, he received the CIM Vale Medal for Meritorious Contributions to Mining “in recognition of his many contributions as a metallurgical engineer, operations manager, and executive in the development of technologies which resulted in low-cost, environmentally sound operations for producing copper, zinc and nickel.”