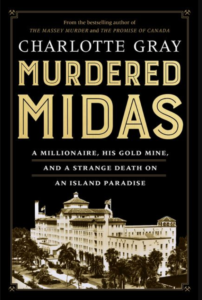 The muscular little Yankee ignored the chatter of the engineers around him. He muttered to himself the names of the town sites that were roughly sketched around those stations: Osborne, Latchford, Cobalt, New Liskeard, Englehart, Cochrane . . . The Temiskaming and Northern Ontario Railway, begun ten years earlier, drove the new mining boom in this region. As it slashed its way due north, it had opened up the sullen landscape of northeastern Ontario, west of the Ottawa River and Lake Temiskaming.

But it appeared to Oakes that all the land around gold and silver strikes had been staked out by eager prospectors before his arrival. The government geologists told the newcomer that the best claims might already have gone, and that there had been few new mineral strikes. Recent claims were little more than “moose pasture,” as mining old-timers liked to say.

Perhaps the Northern Ontario mining boom was slowing down. Wasn’t that predictable, given the pattern of previous high-rolling mining booms? The 1848 California gold rush had tapered off by 1855. British Columbia’s Cariboo gold rush in the 1860s had lasted only three years. The Klondike gold rush of the 1890s was over before the century ended. Had Harry Oakes
missed his chance again? Would he have to turn around and seek his fortune elsewhere—in South Africa, perhaps, where new veins were still being discovered?

Harry Oakes’s eyes remained fixed on the charts. As a youngster, he had reached the Klondike goldfields months after the excitement had peaked. Since then, he had been a Johnny-come-lately at gold rushes all over the globe, arriving after local prospectors had already staked the best ground. He had never been in the right place at the right time (luck remains the key to most prospectors’ success), so fortune had eluded him.

But he had the bug. Wiry and determined, he was not easily discouraged. For Oakes, as for most of the thousands of prospectors who shared his quest, searching the wilderness for the elusive glint of precious ores was much more than a gamble on Lady Luck or an escape from the drudgery of urban life. It was an obsession. And Canada’s vast northern landscape glittered with potential wealth.

Oakes was a foot soldier in the army of drifters, fortune hunters, and prospectors roaming the globe in the period before the First World War. It was a time of change, but also a time of jarring disruptions in a pattern that would repeat itself in the early twenty-first century. Technological breakthroughs were upending ways of life that had been settled for centuries.

First the telegraph, then the telephone and mass-market newspapers had revolutionized communications. Steamships, railways, and most recently automobiles had speeded up transportation systems and shrunk distances. Mechanization had vastly increased industrial production. The Carnegies, Rockefellers, and Van Hornes who drove the industrial revolution amassed immense fortunes, while ordinary Americans and Canadians found themselves uprooted, impoverished, and dispersed.

The sense of dislocation accelerated when economies took a downswing in the early 1890s. So it is no wonder that, in the middle of all the upheaval, young men who were either unemployed, scratching out a living on tired old family farms, or stuck in badly paid office or factory jobs they hated, dreamed of escape and embraced get-rich-quick schemes. Novelists such as Bret Harte and Jack London romanticized life in mining camps. Life on the frontier looked immeasurably exciting compared to a cramped existence in a filthy, overcrowded city.

Years later, when some of those fortune hunters sat down to write their memoirs, many were suffused with nostalgia for the physical challenges they had overcome, the friendships they’d forged with like-minded adventurers, and the frenzy of successful strikes. Arnold Hoffman, an American prospector who disappeared into the Canadian bush in 1922 and re-emerged a wealthy man, would later write with passion about “the richness of our life, the deep satisfaction of complete self-reliance and the glowing health which only the north can give…. Weather meant nothing to us; rain and snow were part of the bush, just as were flies, windfall and the long portages.”

Harry Oakes nursed his dreams alongside everybody else, and in later years would recall with satisfaction the way he had realized those dreams through sheer, muscle-cramping, solo effort. But in 1911, he spoke little, smiled rarely, and never romanticized his quest. Nothing could distract him, and he scorned prospectors who wasted precious time by swigging rotgut whisky and trading tales in dirt-floored bars. At this stage in life, he did not touch alcohol, he rarely smoked because he was slightly asthmatic, and he stuck to his own company.

By his mid-thirties, he was reclusive and driven. Perhaps he felt that time was running out, that his body could not take much more of such a harsh life. So far, he had nothing to show for the thirteen years he had spent chasing his dream. But he persisted. He prided himself on being methodical in his approach to prospecting. “I plan my work, then I work my plan,” he liked to say. His determination would pay off; within a decade he would be labeled “the richest man in the British Empire.”

To order a copy of Murdered Midas: A Millionaire, His Gold Mine, and a Strange Death on an Island Paradise: https://bit.ly/2lHTbYt