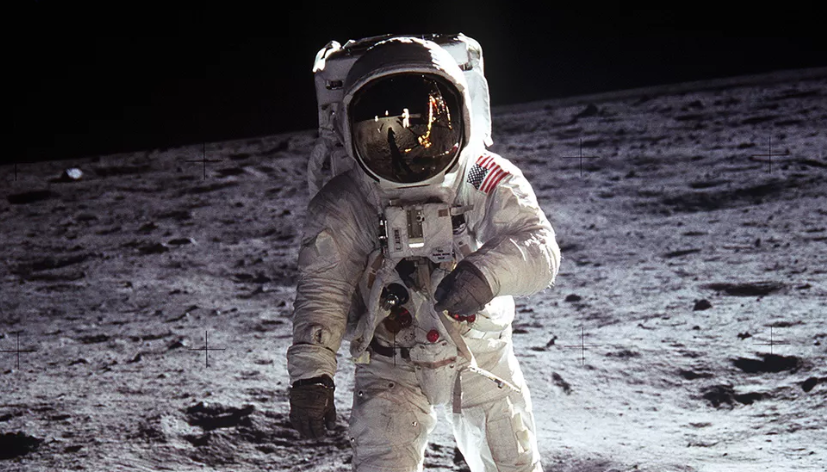 Wiki image may be subject to copyright.

The moon landing wasn’t about Armstrong or Aldrin; it was about us. Fifty years on, the two men who took those first steps are extensions of us, partly real, partly imagined

Norman Mailer once wrote of Neil Armstrong that he was “as much a spirit as a man,” “of all the astronauts the man nearest to being saintly.”

This was gleaned from a press conference Armstrong gave with his fellow Apollo 11 crew members, Buzz Aldrin and Michael Collins, on July 5, 1969, less than two weeks before the launch of the spaceflight that first put humans on the moon.

Armstrong was “extraordinarily remote,” Mailer wrote. “Something particularly innocent or subtly sinister was in the gentle remote air. If he had been a young boy selling subscriptions at the door, one grandmother might have warned her granddaughter never to let him in the house; another would have commented, ‘That boy will go very far.’ He was apparently in communion with some string in the universe others did not think to unravel.”

It seems unlikely that Armstrong, who described himself as a “white-socks, pocket-protector, nerdy engineer,” would have recognized much of himself in this description from Mailer’s book, Of a Fire on the Moon, first published as a three-part series in Life magazine shortly after the moon landing. But then, he never gave anybody very much to go on.

If Mailer imagined the version of Armstrong that best suited him, he wasn’t alone. As soon as Armstrong took that first step onto the dusty surface of the moon 50 years ago, his identity ceased to be his alone and came to belong in part to all of us, to sculpt and mould as we saw fit.

For the rest of this article: https://nationalpost.com/news/world/what-neil-armstrong-and-buzz-aldrin-taught-us-about-ourselves