November 6, 2018 in Aboriginal and Inuit Mining and Oil/Gas 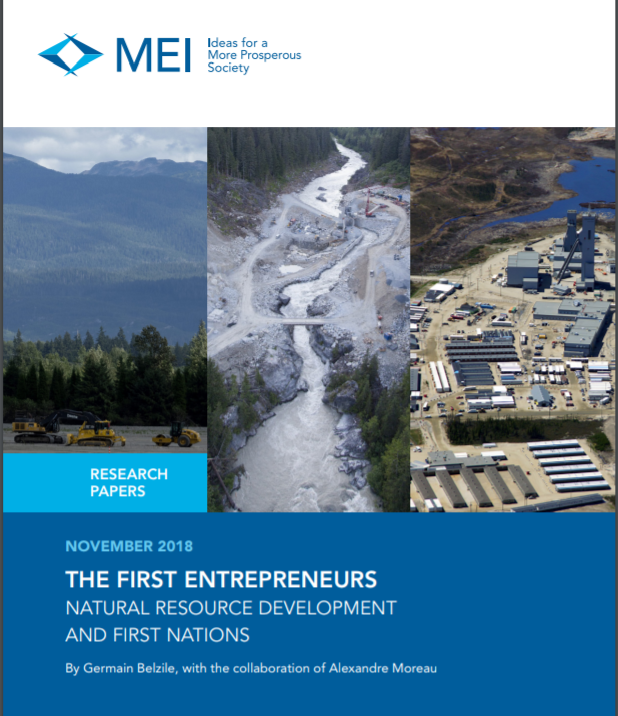 MONTREAL, Nov. 6, 2018 /CNW Telbec/ – Contrary to the widely held belief that they systematically oppose projects, numerous indigenous communities have embraced the development of natural resources to improve their quality of life, shows a Research Paper published today by the MEI.

“First Nations are far from being unanimously opposed to development. Things have changed a lot in the past 25 years,” points out Germain Belzile, Senior Associate Researcher at the MEI and author of the publication. He cites among others the examples of the Cree of northern Quebec, who are active in the mining sector, the Lax Kw’alaams and Kitselas of British Columbia, operating in the forestry and natural gas sectors respectively, and the Fort McKay Nation, which is growing rich from Alberta oil.

This latter case reveals the change in mindset. In the early 1960s, opposition to oil sands development projects was nearly unanimous in Fort McKay. Today, the nation is heavily involved in oil development, and is no longer dependent on the federal government. In recent years, only 5% of Fort McKay’s revenues came from federal transfers.

“The average after-tax income of Fort McKay residents is even higher than that of other Albertans, which is saying something!” adds Mr. Belzile. In addition, the community recently acquired, jointly with another nation, a majority stake in the oil infrastructure on its territory, worth half a billion dollars.
“We have to stop thinking that First Nations are an extension of environmentalist groups.

There are many communities, and the people who make up those communities don’t all think the same way. Like all Canadians, they want to improve their living standards and provide a better future for their children. And they are succeeding in doing so by reconciling economic development with respect for the land and the environment,” explains Germain Belzile.

Reconciliation between First Nations and the rest of Canada, which has been on the agenda since 2008, obviously involves greater recognition of indigenous rights, but it must also be economic. “Entire communities have been transformed by resource development. Let’s not forget that the First Nations were the ‘first entrepreneurs’ of this land, as one of their representatives puts it,” notes Alexandre Moreau, Public Policy Analyst and collaborator on the publication.

Unfortunately, many obstacles remain, despite the wishes of the parties involved. Last year, the federal government put an end to the Northern Gateway project, even though 31 First Nations and Métis communities had negotiated jobs and contracts, and obtained shares in the enterprise. And this year, the Trans Mountain pipeline expansion project is in trouble, despite the fact that 43 nations had signed agreements with Kinder Morgan.

“Many First Nations have chosen the path of development and prosperity. If we want to help them get out of the vicious cycle of government dependence, we need to encourage them in this choice, not throw obstacles in their way,” concludes Mr. Belzile.

The Research Paper entitled The First Entrepreneurs – Natural Resource Development and First Nations was prepared by Germain Belzile, Senior Associate Researcher at the MEI, with the collaboration of Alexandre Moreau, Public Policy Analyst at the MEI. This publication is available on our website.

The MEI is an independent public policy think tank. Through its publications and media appearances, the MEI stimulates debate on public policies in Quebec and across Canada by proposing reforms based on market principles and entrepreneurship.