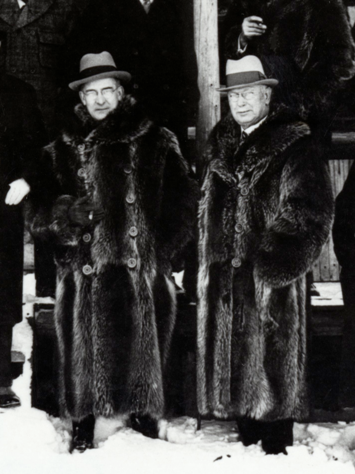 The Timmins family was among the many Montreal families who chose to holiday in Ste. Agathe in the early part of the 20th Century. Henry and Noah Timmins, two inseparable brothers who had married two sisters, purchased a part of the farm of Adolphe Marier in 1915, on what was then called Chemin du Roi, but is now Tour du Lac.

They were a wealthy mining family whose influence extended to mining regions all over the world, but they had not always been in mining. They had started their lives in the simple northern town of Mattawa, Ontario, in the early 1860s.

Henry and Noah Timmins had inherited a general store in Mattawa from their parents. The community at the confluence of the Mattawa and Ottawa rivers, was predominantly French-speaking and Catholic, and the Timmins family lived in both languages.

Their sister, Josephine, had gone to school at the convent of Ste. Anne in Lachine, where she befriended the daughters of Louis Paré, the lockkeeper of the Lachine Canal. By 1878, she had married his son, Dr. Louis Paré, and introduced his sisters to her brothers, leading to the binding of the families through three marriages.

Their mining careers began in September, 1903 when a blacksmith named Fred Larose dropped in to their general store on his way home to Hull. Larose told how he had thrown his hammer at a fox while working alone near Cobalt on the new railroad being built to Haileybury. His hammer struck a rock and knocked the moss off of it.

According to the story, Larose saw the telltale blue in the exposed outcropping and recognized evidence of silver. He staked a claim in his own name and that of his employers, the McMartin brothers. Noah wrote to Henry, who was in Montreal, and encouraged Henry to go to Hull and find Larose to try to buy his share of the claim he had staked.

Upon arrival, Henry discovered that the town was full of Laroses. He began knocking on doors until, after much persistence, he found the right one. Henry had never met Fred Larose, but was reassured that he had found his man because his kitchen was cluttered with ore samples.

After some negotiations, Larose accepted to sell half of his half interest in the stake to the Timmins brothers for $3500, a very large sum in 1903. In closing this transaction, Henry demonstrated great confidence in his younger brother. He had no knowledge of the stake other than the letter that he had received.

No sooner had they completed the transaction than they discovered it was being contested. There is little documentation about the challenging claim, but the other parties swore under oath that they had made the first discovery. After discussion with the McMartin brothers, they invited a lawyer named David Dunlap in for 20% if he could beat the challenge. During this period, perhaps partly because of the publicity, the value of the stake rose.

When Dunlap finally won his suit, Noah Timmins emerged as the clear leader of the syndicate, and he and Henry returned to Hull where they optioned the other twenty-five percent from Larose for $25,000. This large amount can be better understood when you consider that the average family income was then about $650 per year.

Initially there was little silver, and Noah encouraged the syndicate to take the costly risk of sinking a shaft. For almost one hundred feet, the ground only teased them, and then they hit a viable silver vein. To get to this point, the Timmins brothers had thrown everything they owned at the mine. They now had two train-carloads of ore, and with this, Noah went to the bank in Haileybury, hoping to get a $5000 loan.

Dr. W.G. Miller, chief geologist of Ontario, had told him that the ore could be worth as much as $30,000, but to the bank manager it was just two carloads of rocks. Faced with insolvency, Noah headed off to sell the ore. He returned to Haileybury with a cheque for $50,000 signed by William Guggenheim of ASARCO (American Smelting and Refining), and, dropping into the bank, he presented it to the manager.

“I can’t cash a cheque that large! There isn’t that much money in the bank!” the manager claimed. Timmins responded, “This is the security I offered you for a $5000 loan. We won’t be troubling you further. We’ve made arrangements for another bank to come into this country and there will be no objections to taking mining accounts.” Soon the Timmins brothers were managing a healthy concern from their new home in Montreal and over the next two decades the Larose Silver Mine produced over twenty-five million ounces of silver.

In the meantime, Josephine and Dr. Louis Paré, who had become Assistant Chief Surgeon for the Royal Northwest Mounted Police, had acquired a ranch in Saskatchewan, then still part of the Northwest Territories. When Josephine died suddenly, her youngest child, Alphonse, was only two. Their eldest daughter soon married and she and her husband moved with Dr. Paré to Whitehorse. Over the next dozen years, young Alphonse grew up on horseback or in a canoe, living sometimes with his sister and sometimes with an uncle on the ranch. He spoke not only French and English, but also learned Cree and Ojibway.

His closest friend was Johnny Sauvé, a Cree. His uncle, father and sister felt that he should get a proper education, so after years of home schooling he was sent east to the Royal Military College in Ontario, where he was groomed for the British Cavalry. His horsemanship was excellent as were his survival skills. When he finished, he was offered a commission in the Cavalry in India, and he took the train to Ottawa to enlist and learn his orders.

The train was set to stop in Ottawa in the middle of the night, so Alphonse gave instructions to the porter to wake him in ample time to disembark there, but as fate would have it, the porter forgot. Alphonse woke only as the train was pulling into Windsor Station in Montreal. Furious, he contacted Ottawa letting them know that he had been delayed. The next train did not return until evening.

Alphonse visited with his uncles in Montreal and shared with them his exciting plans, but he quickly learned that his uncles Noah and Henry did not fancy having a nephew who would be sent off to fight for the British in India. Noah offered to underwrite the costs if he would go, instead, to McGill University and become a mining engineer. Living with his uncles and aunts, he became another child in a family that was so close that his cousins, arriving home, would not ask, “Where’s Dad?” but rather, “Where are my fathers?”

Upon graduation, Alphonse made an ideal point man for Noah, especially with his knowledge of the bush. He and his friend Johnny Sauvé would go out on regular forays to track rumours of valuable stakes and to examine their potential. They would split up, each taking a canoe and supplies, having agreed ahead of time on rendezvous points. It was during the summer of 1909 that Alphonse arrived at one such spot to find a birch bark note with the words “I Sic” carefully pencilled on it; nothing else.

These were healthy, strong men not given to illness, and so Alphonse immediately set out back along Johnny’s route. Upon finding him, he was relieved to discover that his friend was suffering from nothing more than excitement. Johnny introduced him to two young fellows who were camping out on a claim they had just staked.

Alex Gillies and Benny Hollinger had uncovered the gold mother lode of Canadian mining. Alphonse later described it: “It was as if a giant cauldron had splattered the gold nuggets over a bed of pure white quartz crystals as a setting for some magnificent crown jewels of inestimable value.” He immediately tried to negotiate a deal with Benny Hollinger, a nineteen-year-old prospector who had been grubstaked by the local bartender.

Hollinger remained aloof and non-committal, but eventually indicated that Paré would have to negotiate with his manager John McMahon, at the bar in Haileybury. Paré returned to Haileybury and approached McMahon, simultaneously cabling his uncles in Montreal.

Noah came immediately to help with the negotiations, and, on the strength of his nephew’s information, committed himself to paying the unimaginable price of $330,000. Initially, the syndicate split over the decision and Noah was faced with going it alone; even the first banker pulled out, almost torpedoing the deal, since Noah had already committed. Even so, Noah and Alphonse held to their position. They found another banker, and eventually Henry and the other members of the original syndicate joined in.

There is a tradition that a mine bears the name of the stakeholder, and that is how Benny Hollinger’s name became associated with one of the best-known mines in Canadian history at Timmins, Ontario. Hollinger himself died of alcoholism in his twenties, but Noah Timmins had mining in his blood. Under the company name of N.A. Timmins, he backed Noranda’s Horne smelter and he was the co-rescuer of the Sisco mine in Quebec. He also backed mines in Manitoba, Yellowknife, the Ross Mine and the Young Davidson mine in Matachewan near Kirkland Lake, as well as placer mines in the Yukon and others outside of Canada.

Despite his unfailing enthusiasm for mining, in December 1927, he was quoted as saying, “Many people are going to have a rude awakening soon when the current mining-share boom in northern Ontario collapses. They will be the very people who can least afford it.”

Noah Timmins, affectionately called “The Grand Old Man of Canadian Mining”, passed away in 1936 at the age of sixtynine. Henry, somewhat older than his brother, had already died. Jules Timmins, Henry’s oldest son, followed his uncle as the head of Hollinger and the company went many other ventures.

In 1978, Conrad Black acquired a controlling block of Hollinger Mines and through mergers and acquisitions, it became a conglomerate. In 1985, the holding company began to divest itself of its mining companies and focus on its newspaper holdings. While the name survives, the company bears no resemblance to the original mining company.

Alphonse Paré continued working for the family company, and while he explored stakes and mining operations all over the world, he never again experienced a find as great as the Hollinger. Fred Larose, it is imagined, lived comfortably ever after on the large sum he acquired for his stake.

While other descendants of the original Timmins-Paré families have left significant legacies, especially in the field of medicine, today the best known are probably the Cowboy Junkies, descendants of Noah Timmins, and Jessica Paré, great-granddaughter of Alphonse Paré.

Exploring Innovation in Northern Canada with Insights from the Mining Innovation System in Greater Sudbury, Ontario – by Heather Hall (The Northern Review – June 29, 2017)
The story of how B.C. asked for, benefited from, then double-crossed Trans Mountain – by Roland Priddle (Financial Post – February 23, 2018)