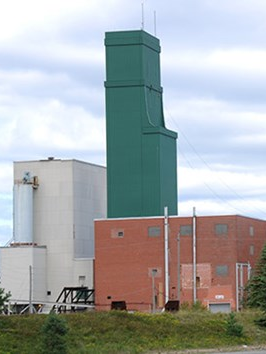 Creighton Mine, Sudbury Ontario. The mine which started operation in 1901 and is still in production. It is the deepest mine in the Sudbury Basin and among the four deepest in the country. (Wiki Photo)

So that, when we consider that by far the greater part of nickel used at the present time is utilized in making armor-plating for the great battleships, we begin to understand how dependent the little population of Creighton is upon the aggressive naval policies of the powers of Europe, and the other ambitious nations of the present day.

Electrical power is used in mining, transmitted from the High Falls, about twenty miles west. The power house, with its motors, powerful apparatus, is an interesting spot for anyone who likes machinery. The warehouse and office building is of red brick and is spacious and well lighted.

The “dry,” or “clearingup” room for the employes, is a feature very worthy of mention. This “dry” is a large, well-lighted, brick building, in which each employe may procure a roomy and well-ventilated locker for his changes of clothing.

Then, conveniently situated, are several long enameled troughs supplied with hot and cold water, and, perhaps best of all, at one end of the building are several refreshing shower baths, a luxury which we students have learned to prize in our university gymnasium.

The rock-houses, two in number, are high frame structures at the edge of the pit, into which the ore is raised from the mine in “skips,” or little cars, which are hoisted up the inclined tracks shown in the picture. In the rock-house the ore is crushed, picked over, and loaded upon the railway cars, and then taken to the smelter near Sudbury.

After the ore is crushed, it passes along on wide belts, close by which the rock pickers stand or sit to pick out the refuse rock, and leave the richer pieces to pass on to the chutes, and into the railway cars beneath. As many as thirty cars of ore per day are shipped, and each car is worth about one thousand dollars to the company.

When one looks down to the dizzy depths of the open pit he can only form a very vague idea of its size. It is very large, and is now open to the third level, which means that the bottom of this open pit is three’ hundred feet below the surface. There is still another level below this, hidden from the daylight, and extending another hundred feet into the bosom of the earth.