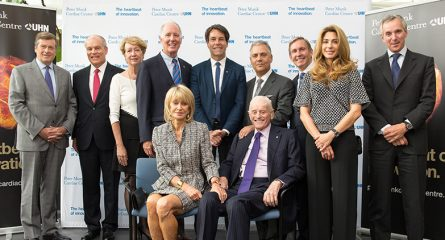 Toronto, ON (September 19, 2017) – University Health Network (UHN) announced today that The Peter and Melanie Munk Charitable Foundation is increasing its support to the Peter Munk Cardiac Centre (PMCC) with a transformative gift of $100 million. This gift, which will bring the Munks’ support of UHN and the PMCC to more than $175 million since 1993, will primarily be used to develop a data-driven digital cardiovascular health platform that reduces costs, advances medical research, and improves the outcomes of patients with cardiac and vascular disease.

“This historic gift will enable the PMCC to continue to lead the future of cardiovascular care globally, and through our partnership with the Vector Institute will further advance Toronto’s and Canada’s leadership in the field of artificial intelligence,” said Dr. Peter Pisters, President and CEO of UHN, home to the PMCC. “This gift represents the largest commitment to a Canadian hospital in our country’s 150-year history and builds on Peter and Melanie’s extraordinary legacy of philanthropy.”

“Melanie and I are committed to the mission of the PMCC, which is to be the world’s leader in cardiac and vascular care,” said Peter Munk. “Since it opened, the PMCC has changed the way cardiovascular patients are treated in the Province of Ontario, across Canada, and around the world. Now, using the most innovative digital technologies, the PMCC will establish a new standard of care for patients and, ultimately, lead to a significant reduction in cardiac and vascular fatalities.”

“The digital cardiovascular health platform will allow us to apply artificial intelligence and machine learning to predict and treat life-threatening cardiac problems before they occur, and to develop novel therapies for patients with cardiovascular disease,” said Dr. Barry Rubin, Medical Director of the PMCC. “None of this would be possible without the generous support of Peter and Melanie Munk and their vision for the future of cardiovascular care.”

ABOUT THE PETER MUNK CARDIAC CENTRE

The Peter Munk Cardiac Centre (PMCC), established through the generous support of the Munks, is the premier cardiac centre in Canada. Since its opening, the PMCC has saved and improved the lives of cardiac and vascular patients from around the world. Each year, over 163,000 patients receive innovative and compassionate care from

multidisciplinary teams in the PMCC, which trains more cardiologists, cardiovascular surgeons, and vascular surgeons than any other hospital in Canada. The PMCC is based at the Toronto General Hospital and the Toronto Western Hospital – members of the University Health Network. For more information, visit
www.petermunkcardiaccentre.ca

Toronto General & Western Hospital Foundation (TGWHF) raises funds for research, education and the enhancement of patient care at the Peter Munk Cardiac Centre, in the Toronto General and Toronto Western hospitals. Together with its donors, TGWHF is helping pursue the knowledge that makes all our lives better. For more information, visit www.tgwhf.ca.

Established in 1997 as a result of the generous support of Peter and Melanie Munk, the Peter Munk Cardiac Centre (PMCC) at University Health Network (UHN) is an internationally recognized leader and pioneer in cardiovascular care, research, innovation and education. Home to many world firsts, the PMCC has changed the way that patients with heart and vascular diseases are treated around the globe.

The mission of the PMCC is to provide state-of-the-art, multidisciplinary, personalized care for patients with heart and vascular disease in Toronto, across Canada, and throughout the world. Through our unremitting focus on innovation we continue to lead the development, application, and evaluation of life-saving therapies that improve heart and vascular health. As part of Canada’s largest academic health sciences centre, UHN, we are committed to educating future generations of health care providers.

Our vision is to become the world’s leading heart and vascular centre. In the next stage in the evolution of the PMCC, known as Phase IV, we will realize this vision by integrating the most advanced digital technologies with ever-more outstanding patient care, teaching, and research. This will improve patient outcomes, decrease health care costs, generate new knowledge, and lead to the development of new therapies.

Oversight of Phase IV will be the responsibility of the Peter Munk Scientific Advisory Board. This group of internationally recognized experts in cardiovascular disease is chaired by Dr. Victor Joseph Dzau, President of the National Academy of Medicine of the US National Academy of Sciences. Working closely with PMCC Medical Director, Dr. Barry Rubin, the Peter Munk Scientific Advisory Board is charged with ensuring that all Phase IV deliverables are completed successfully.

 Establish a PMCC Clinical Trials and Translation Unit to dramatically increase the number of clinical trials that are led by the PMCC.

 Automate the process of identifying PMCC patients who are candidates to participate in clinical research.

 Increase international collaboration by engaging partners in the PMCC-led Worldwide Network for Innovation in Clinical Research, a consortium of 27 hospitals in 9 countries.

 Develop personalized cardiovascular care with a focus on patients and family members with abnormal heart rhythms, enlarged hearts, dilated major blood vessels at risk for rupture, and other heart and vascular diseases that are linked to genetic causes.

 Become a world leader in the discovery of genes that cause cardiovascular disease, determine how these genes function, and develop novel treatment strategies that counteract patients’ genetic susceptibility to diseases.

 Integrate the approaches used by UHN’s Techna Institute to accelerate the development and commercialization of intellectual property and devices created in the PMCC.

 Develop new revenue streams to sustain an environment of discovery and learning at UHN, decreasing dependence on government funding.

 Remain at the forefront of patient care and outcomes by participating in quality assessment databases that benchmark the PMCC’s performance against its North American peers.

 Integrate prevention and rehabilitation initiatives into the care of all PMCC patients.

 Improve convenience for patients by implementing initiatives such as single, coordinated visits to the PMCC.