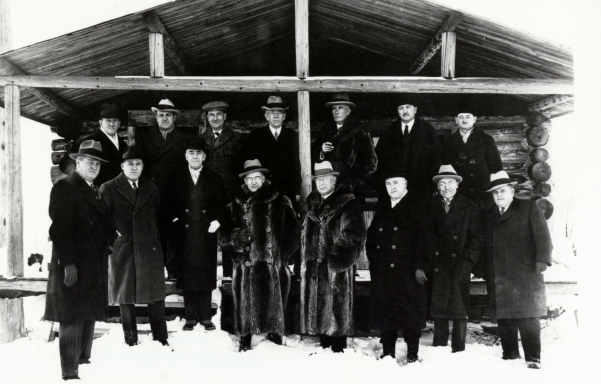 For an excellent website historical resource on Rouyn and Noranda: http://www.virtualmuseum.ca/community-stories_histoires-de-chez-nous/rouyn-noranda-une-histoire-de-mines_a-mining-story/

In the mid-1920s, discovery of copper and gold deposits in Northwestern Quebec resulted in an epic mining rush. Prospectors, followed by thousands of men and women, gathered there to work and live. Two neighbouring mushroom towns with many fundamental differences, Rouyn and Noranda, quickly came to life in the boreal forest, becoming populous and organized communities.

Unlike the farming parishes established earlier on in Abitibi and Témiscamingue, Rouyn and Noranda were built as a result of mining developments. In but a few short years, the landscape changed drastically: In the 1910s, only Aboriginal peoples and prospectors looking for precious metals were seen around Osisko Lake, but in 1925, a large influx of newcomers settled in the area.

Given the nature of their development, Rouyn and Noranda are clearly boomtowns, or mushroom towns. Yet, even though the two cities were founded because of the mining rush and both of them are considered sister cities, they are quite different. While Noranda was built and mostly administered by the mining company, Rouyn was built in a more chaotic and ebullient way.

The history of the two mining cities has been shaped by extraordinary events. Not only did they witness spontaneous and sometimes disorganized development—reminiscent of the California Gold Rush and the Klondike Gold Rush—, their populations saw a large influx of immigrants coming mostly from Europe and also from Asia. Mining is a difficult and dangerous job, which would often cause accidents and consequently prompt the workers to organize strikes. Mining work has indelibly shaped the history of the sister cities.