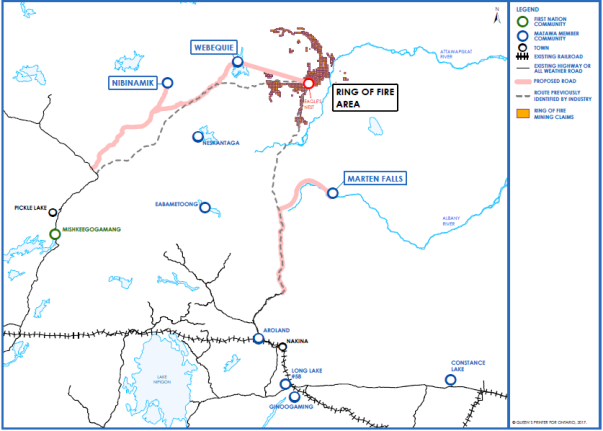 An agreement in principle to bring permanent access roads to three remote First Nation communities near the Ring of Fire was greeted with relief from the largest mine developer in the region. “This is the day we were waiting for,” said Noront president-CEO Alan Coutts.

He was in Thunder Bay to hear Premier Kathleen Wynne’s Aug. 21 announcement that agreements have been struck with Marten Falls, Nibinamik and Webequie First Nations to build two corridors to connect those communities to the provincial highway system.

One proposed east-west corridor will be shared with the mining industry to reach the rich mineral deposits in the James Bay lowlands. Wynne said the initial preparatory environmental assessment work starts immediately followed by feasibility planning.

The road construction starts sometime in 2019, pending all regulatory approvals being in place. A rudimentary government map shows the routing for an east-west to the Ring of Fire deposits beginning just north of Pickle Lake with branch roads leading into Nibinamik and Webequie. The route roughly follows the path of the winter road network.

The north-south route extends north from the Aroland-Nakina area along an industry route similar to the one staked by KWG Resources in 2011, but at roughly the half-way point from the Ring of Fire veers east to Marten Falls.

“We needed that certainty,” said Coutts, who hinted earlier this year that the entire project could be mothballed, including its Esker exploration camp, once their flow-through financing concluded in late September.

For the rest of this article: https://www.northernontariobusiness.com/regional-news/far-north-ring-of-fire/this-the-day-we-were-waiting-for-700357