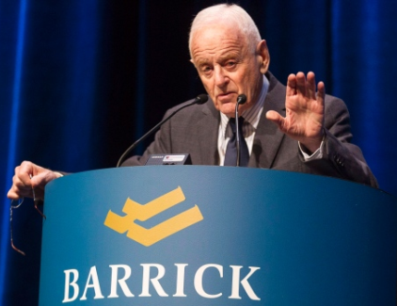 Peter Munk is stepping down on April 30th from his position as chairman of Barrick Gold, a company he founded three decades ago. In an interview on March 24th in his Toronto office, he talked about his career, the mining business and what advice he would give to those entering it today.

How has the mining business changed since you first got into it?

Mining is a very Canadian business, after fur trading, the second activity for which we were known. We were the hewers of wood and the sellers of ore. That was our business. The Hudson’s Bay Company was first, but after a while we became a mining country. We had the biggest mining schools, we had the biggest mining companies, more discoveries than anybody else. We produced the best miners. We had world-class companies.

For 100 years it was assumed that a successful mining company had to be run by miners. They forgot that mining companies ultimately are public vehicles when they are big. The thought of having a mining company run by somebody who had never been to a mine was as alien as you and I going for lunch to the moon.

I knew nothing about mining, so I couldn’t pretend I was building a mining empire because of my unique knowledge of geology. What I did know was how to run a business. The investor doesn’t give a damn about what you know about mining. They want results. And if the businessman can produce better results than the miner, and I mean financial results not mining results, they are going to buy that share.

My job was to play the stockmarket. My job was to hustle the shares. And I left the mining operation totally to miners. You can’t be a master of everything in today’s world. So the mining industry today is more like any other public business. And that is a major change in the Canadian mining scene. We lost all the top mining companies because we were too long and too much in the mining-fraternity mode, meaning the belief that to run a mining company you had to be a miner.

Why did you decide to go into gold?

Because I’m a pretty good businessperson. I like business. And mining was to me an area that offered an opportunity. Now that our shares have fallen off last year, people say Munk is all committed to growth. Give me a break. The whole ethos of business, the whole teaching of business schools, is that if you dream, dream big. If you have something great, whether it’s Facebook or Apple, do you want to remain small? Only these moronic institutional idiots who couldn’t run a truck stand say “Oh, he’s committed to growth.” What do you want to be committed to? Getting smaller? Will that make people buy your shares?

Then they say, Munk is a dictator, he’s influencing the board. I say, if you are a fading lily, are you going to build a company? How else can you build a company unless you believe in your views, unless you articulate those views, and unless you are prepared to live and die by those views? It doesn’t mean you don’t make mistakes. Every human being, by the fact that they make decisions, must make bad ones. The key is to be able to have the strength to survive those decisions, learn from them and get stronger. And the gambler never learns from it and goes down. And that’s the difference between a gambler like (Paul) Reichmann or (Robert) Campeau, which you (The Economist) compared me to.

For the rest of this article, click here: http://www.economist.com/blogs/schumpeter/2014/04/interview-peter-munk