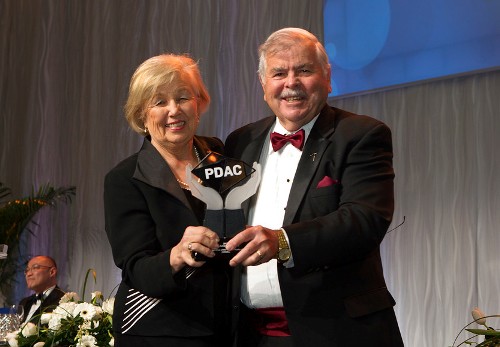 From time to time, the PDAC presents a Special Achievement Award that recognizes exceptional contributions to the mineral industry.

Women’s Association of the Mining Industry of Canada (WAMIC): For continuous philanthropy to the mining industry, as well as Canadian health and educational institutions for 95 years.

WAMIC was founded in 1921 with the objective of promoting friendship among women connected to mining, supporting the industry and people in it, and participating in work that related to the well-being of Canadians.

Over the past 95 years, WAMIC members have overseen the distribution of more than $1.8 million in support of young people’s education, most of which was raised directly by their efforts. WAMIC is probably best known for its fundraising, its numerous and imaginative social events, and the association’s strong presence at both the PDAC and Canadian Institute of Mining, Metallurgy and Petroleum conventions in Toronto. WAMIC was also the inspiration for the similar Greater Vancouver Mining Women’s Association in British Columbia.

While the role of the association has evolved in recent years, it continues to make a significant impact. WAMIC has provided financial support for hundreds of students undertaking earth science and mining-related subjects and programs at colleges and universities across Canada. Canadian students attending Michigan Technological University and the South Dakota School of Mines in the United States have also received financial support. Furthermore, university and college programs have received direct contributions for field trips, technology and educational events.

In 1939, WAMIC established its first bursary at the University of Toronto. Named after WAMIC’s founder Edith Tyrrell, the annual award continues today and provides a significant benefit to a third- or fourth-year student in the mineral engineering or geology programs.

WAMIC’s generosity continues to support many good causes. Special emphasis has always been given to those involving education, health, women and children, Aboriginal communities, and museums such as the B.C. Museum of Mining (now the Britannia Mine Museum) and the Royal Ontario Museum.

WAMIC began from very humble beginnings as a simple meeting of women connected to the mining industry. Despite a changing world, it still provides friendship amongst mining women and supports worthy causes, while its legacy continues to assist the next generation of mineral exploration and mining professionals in Canada.