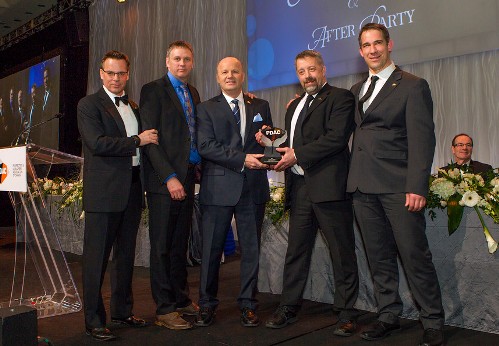 This award, named for a former president of the association, honours individuals who have accomplished one or both of the following: made a significant mineral discovery; made an important contribution to the prospecting and/or exploration industry.

The high-grade Amaruq deposits represent a significant gold discovery in Nunavut and one of the few recent large gold discoveries in Canada. The robust Whale Tail mineralized system lies nearby the initial discovery, the IVR deposit. Agnico Eagle Mines Limited’s (Agnico) Val d’Or Exploration Division made the discoveries between 2013 and 2016 while prospecting a virtually unexplored part of the Woodburn Lake Belt, 350 kilometres west of Hudson Bay. The division recognized that the type of mineralization at Amaruq was different from many typical gold occurrences.

The 1,167-square-kilometre Amaruq property includes the major Whale Tail deposit and three parallel gold zones named I, V, and R (the IVR deposit), between 100 and 800 metres north of Whale Tail. Inferred resources are estimated at 19.4 million tonnes grading 5.97 g/t gold for a total of 3.7 million ounces of gold (as at June 30, 2016). Ore-grade drill results include hole AMQ16-570 drilled in 2016 that intersected 47.6 metres estimated true width grading 5.9 g/t gold at 288 metre depth in the Whale Tail deposit.

This illustrates the potential for this to become a giant deposit. Drilling in 2016 indicated that the Whale Tail mineralization extends for at least 2.2 kilometres along strike from surface to locally as deep as 730 metres. The highlight of the project for 2016 was the discovery of additional lenses in the V Zone, which dips shallowly toward Whale Tail from surface to 540 metres locally, improving its potential as a second source of open pit ore.

The exploration program originally targeted the IVR gold showing, after reviewing public geological maps and assessment reports. An initial exploration program in 2013 consisted of prospecting, mapping, and a small ground geophysical survey (Mag-EM). A four-hole diamond-drill program targeted the best conductors and the fourth hole intersected gold mineralization. Additional budget was allocated to drill another 10 holes later that year that identified three mineralized zones – I, V and R. The project has grown quickly since then, with significant investment.

In addition to the IVR deposit and Whale Tail, the Val d’Or Exploration Division discovered two more zones of mineralization at nearby Mammoth Lake. Samples from a boulder field north of Mammoth Lake contained visible gold, adding to the resource potential of the area.

The potential and excitement of the discovery is heightened by the timing and location. Reserves at the Meadowbank Gold Mine—one of Agnico’s largest gold producers—are expected to be depleted during 2018. Furthermore, Meadowbank is conveniently located just 50 kilometres southeast of Amaruq, meaning much of the essential infrastructure for a producing mine is already in place. Construction of a 62 kilometre access road is underway to connect the mine to Amaruq.