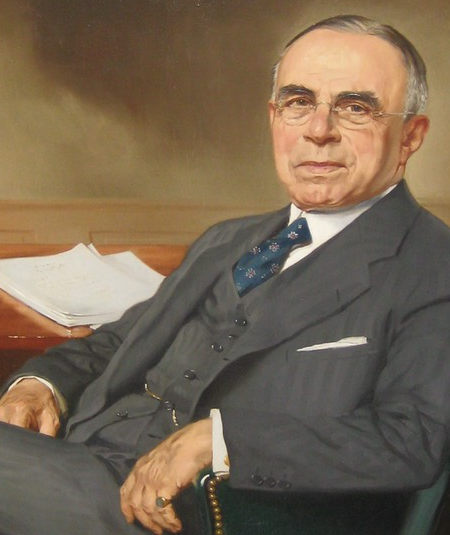 Following ten years of mining exploration in the region, a major ore body was discovered on February 4, 1956, and a year later Thompson was founded. Named after INCO’s chairman, John F. Thompson, the new townsite was designed as a “planned community” following an agreement between the Government of Manitoba and INCO Limited.- (Heritage North Museum http://heritagenorthmuseum.ca/thompson-area/history-of-thompson.html)

Information Below Courtesy of Vale

The City of Thompson and the main orebody of Inco’s Manitoba operations (now owned by Vale) are named after Dr. John F. Thompson. Some historical records say Dr. Thompson’s name was used because he was celebrating his 50th anniversary with the company the year the orebody was discovered. But it was his accomplishments, not his time with Inco that earned him this honour.

From the beginning of his career with Inco, in 1906, Thompson played important roles in developing and encouraging the expanded use of various nickel alloys, introducing them to the textile, chemical, power and food service industries.

In 1918, he established the first Technical Department. This proved to be the foundation for Inco’s growth throughout the 20th century, as it supplied technical guidance to customers.

Following the First World War, Inco wanted to expand its commercial markets. Thompson was responsible for supervising both the construction and initial operations of a rolling mill in Huntington, West Virginia. His laboratory experience, combined with a practical approach to product development contributed to the successful production of new alloys for commercial use. He evolved the company to make new products such as nickel alloy wire and tubing. As the demand for these and other applications for nickel increased, Thompson helped the company evolve to meet those needs.

In 1928, The International Nickel Company of Canada, Limited became the parent company of the corporation. Thompson was elected Assistant to the President at this time, ending his direct involvement in the research and technical areas. But his work during those first 22 years in establishing and promoting a scientific base of applied research to expand the uses of improved and practical nickel alloys would be put to good use in the next phase of his career.

Inco weathered the Depression and in the early 1930s began to experiment with the design of a kitchen sink. Researchers utilized the MONEL* alloy developed years earlier, but little commercial success was achieved. In 1948, Thompson approved funding for a project to develop the now classic stainless steel kitchen sink. This has become the largest single application of the alloy in the world.

When Thompson joined Inco, world demand for nickel was about 20 million pounds. It increased to 100 million pounds by the end of World War I. Between 1935 and 1939, Inco’s sales rose to 210 million pounds annually, which was more than 80% of world consumption. During this period, Thompson was promoted to Executive Vice-President.

With the beginning of World War II, the dynamics of nickel production changed once again. From 1939 to 1945, Inco delivered to Allied countries an astounding 1.5 billion pounds of nickel. The groundwork laid by Thompson 20 years earlier proved to be a key factor in the application of nickel to the war effort.

After World War II, Thompson guided Inco through one of the most exciting projects in the company’s history. Thompson’s research and technical expertise encouraged and supported the development of new exploration techniques that were used in north central Manitoba. An active exploration program capitalized on the development of the airborne magnetometer, which was adapted from wartime use to locate enemy submarines. This technology proved essential to mapping of potential deposits in remote areas.

Armed with this new exploration technology, Inco set about with the largest exploration program in its history. Ten years and $10 million in exploration resulted in the discovery on February 5, 1956 of the Thompson ore body. The discovery coincided with Thompson’s 50th year of service with Inco.

John Thompson and his Inco team engaged in detailed and intense discussions with the Manitoba government about developing the town, plant site and mine. This was to be the world’s first fully-integrated mine, milling, smelting and refining complex, all to be carved out of the Precambrian Shield. Negotiations were handled with the utmost confidentiality and at the highest executive levels. As Chairman, Thompson set both the tone and direction of the proceedings.

The 1956 Agreement provided for the infrastructure for both the plant site and community. Inco built the roads, water and sewer, schools, municipal offices, hospital and other infrastructure necessary for a community of 8,000. All the assets were turned over to the new community, starting it off on a debt-free foot. In addition, an interest-free loan to Manitoba Hydro to construct the Kelsey Generating Station ensured power for Inco and the community, as well as growth potential for the utility.

Little could Thompson have guessed the impact Inco and the city named after him would have on the development, growth and prosperity of northern Manitoba. Today, the city is the hub of transportation, communication, recycling, winter weather testing, research, education and different levels of government.

Little could he have known that the mine and plant site he approved and negotiated for would still be an important producer in the global economy even after 50 years of operation.

In 1952, John Fairfield Thompson relinquished his position as President and remained as Chairman and Chief Executive Officer until his retirement in April 1960. His career spanned the formative years of the nickel mining industry and the evolution of Inco from its infancy to its domination of world markets. As a scientist, Thompson explored the potential of nickel. As a researcher, he expanded its practical applications.

As a leader, he guided Inco through periods of war, depression and expansion. His legacy is undisputed. His work will remain a vital and fascinating chapter in both Inco and Canadian mining history.