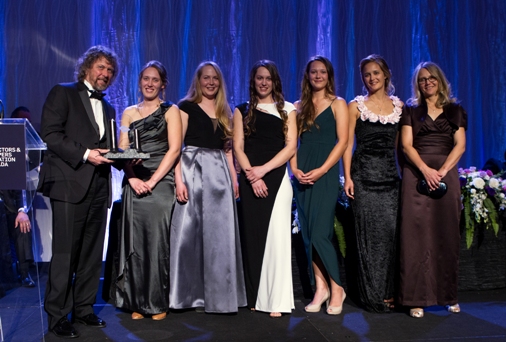 From time to time, the PDAC presents a Special Achievement Award that recognizes exceptional contributions to the mineral industry.

The Bjorkman Family: For their multi-generational dedication to geology, prospecting and diversity.

Bjorkman Prospecting is a long-standing Ontario-based prospecting company that has worked in locations all across Canada as well as internationally. Encouraged by his father, Karl Bjorkman started prospecting around 1990 and saw his business grow to include claim staking, exploration project management and technical support.

His five daughters, Jessica, Katrina, Ruth, Veronique and Karla, along with one son named Bjorn, inherited his passion for finding gold, making it the third generation to work in the industry. Wife and mother Nikki, keeps the books.

The Bjorkman’s have an extensive archive of prospecting information, and in partnership with other Thunder Bay area entrepreneurs, they stake ground in anticipation of finding a senior partner to fund further and more extensive exploration.

The Bjorkman girls are credited for encouraging other women into a predominantly male dominated industry. Female prospectors are rare, let alone five sisters who feel more at home wandering the bush than they do in the city.

Their influence reaches further than gender. As volunteers with the charitable organization, PDAC Mining Matters, they have contributed to Mining Rocks Earth Science Camps sharing their knowledge and passion for prospecting and geology with Aboriginal youth in northern Ontario communities.