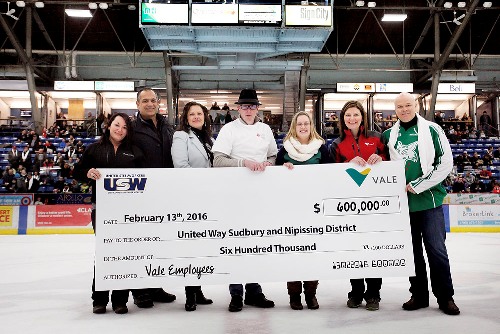 (L to R) Tina Vincent-Gagnon and Nick Larochelle from the United Steelworkers present Kelly Sinclair, Michael Cullen and Katherine Cockburn from United Way Sudbury and Nipissing District with a cheque for $600,000 along with Danica Pagnutti and Stuart Harshaw from Vale, on behalf of Vale’s employees in Sudbury.

SUDBURY, February 16, 2016 – Vale and the United Steelworkers (USW) celebrated another Sudbury Saturday Night with a $600,000 donation to the United Way Sudbury and Nipissing District on February 13th. The funds will be distributed to local United Way member agencies for programming and operational support.

“This investment in our community is something our employees can be very proud of,” said Stuart Harshaw, Vale’s Vice-President of Ontario Operations. “Their continuous generosity makes an enormous difference in our community.”

Vale partners with the United Steelworkers to support the local United Way fundraising campaign. Employees donate through payroll deductions and Vale matches 50 cents to every dollar that employees contribute.

“It never ceases to amaze me every year, USW Local 6500 members dig deep in their pockets to help those in need, said Rick Bertrand, President of the United Steelworkers Local 6500. “Their kindness, compassion and commitment to help the less fortunate in our community is truly remarkable.”

The Vale-USW donation has always been the highest contribution to the local United Way campaign since the first campaign began in 1982. In fact, over the years, Vale and the United Steelworkers have raised approximately $17 million dollars for the United Way.

“For over 30 years, Vale/USW has been a proud partner of United Way and continues to play a significant role in our overall campaign success,” said Michael Cullen, Executive director of United Way Sudbury and Nipissing District. “The Vale/USW team is committed to making our community a better place for all and we would like to thank everyone who contributed to the campaign this year.”