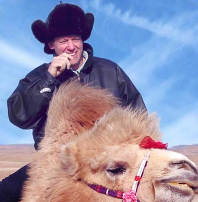 Robert Friedland has been a dynamic, transformative force in the Canadian and international mining industries for more than 25 years. The entrepreneur, financier and company-maker is one of the most recognized mining personalities and achievers in the world.

With his leadership, executives and companies affiliated with his Ivanhoe Capital Corp. have raised more than US$10 billion on world capital markets to advance natural resource exploration and development projects and leading-edge exploration and communications technologies in more than 30 nations.

In Canada, Friedland cofounded Diamond Fields Resources in 1992 and became co-chairman in 1994, handling financing after a hunt for diamonds and base metals by contracted geologists discovered nickel and copper at Voisey’s Bay in Newfoundland and Labrador.

Encouraged by Friedland’s “stake-to-the-horizon” mantra, and his capacity to secure investment commitments, Diamond Fields’ intensive exploration left little for the rush of latecomers. Inco won the big-league bidding orchestrated by Friedland, paid $4.3 billion for the Voisey’s Bay discoveries in 1996 and began production in 2005.

Chicago-born Friedland graduated with a political science degree from Reed College, Ore., in 1974. Flashlight inspection of an abandoned drift at the inactive Warner gold mine on Oregon timberland from an investment partnership with college pal (and Apple cofounder) Steve Jobs provided the first glint of Friedland’s mining destiny in 1978. He found only fool’s gold (pyrite), but it sparked an innate curiosity and lifelong desire to understand earth’s mineral riches.

Warner was a founding asset in Galactic Resources, with an early 1980s listing debut on the VSE and TSX. Galactic’s ill-fated and regretted Summitville gold mine in Colorado imprinted Friedland with respect for fulfilling environmental obligations, and, he adds, made him wary of tactics by governmental agencies.

Friedland founded and financed Fairbanks Gold, whose Fort Knox discovery was sold to Amax Gold (now Kinross) for US$152 million in 1992, and remains Alaska’s largest gold mine.
Holding U.S. and Canadian citizenships, Friedland made Singapore home base for Ivanhoe Capital and assembled Asia Pacific projects in Canada-based Ivanhoe Mines, a flagship launched in Toronto in 1996.

Ivanhoe Mines explored its Oyu Tolgoi prospect in Mongolia in 2000, which revealed a 12 km chain of copper-gold-silver deposits that today ranks among the world’s biggest mineral discoveries. Rio Tinto acquired majority control of Oyu Tolgoi in 2012 and began open-pit production in 2013 — and plans a giant underground mine.

Also in 2000, Friedland’s African Minerals explored Sub-Saharan Africa, adopting the name “Ivanhoe Mines” in 2013. In 2014, construction began for a mechanized, underground mine on the site of a major discovery of platinum-group elements, nickel, copper and gold on South Africa’s Platreef. In the Democratic Republic of the Congo, Ivanhoe’s 2009 Kamoa copper discovery — the DRC’s largest in a century — is recognized as the world’s largest undeveloped high-grade copper deposit.