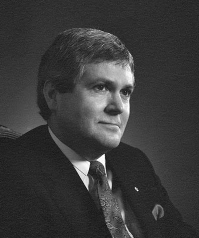 Major advances in metallurgical engineering and metals processing can be traced to the intellectual prowess of a few giants, and Keith Brimacombe is unquestionably one of them. As a researcher, he pioneered the application of computerized mathematical modelling to analyze and design processes to extract metals from their ores and convert them into useful products. His efforts led to metallurgical processes and processing advancements that helped the materials industry lower costs, make new products and improve productivity and quality control.

Brimacombe was a strong advocate of cooperation between universities and industry, and his vision helped make Canada a leader in value-added metals processing. As an educator and lecturer, he inspired a generation of professionals who embraced the materials revolution, and managed the technological change that sustained it.

Brimacombe was born in Nova Scotia and raised in Alberta, and earned a BASc degree in metallurgical engineering from UBC in 1966. He returned to UBC as an assistant professor in 1970, after completing his doctorate at Imperial College in London, England. He became a full professor in 1979.

Brimacombe became a world leader in the field of continuous casting. His innovative research, initiated in the early 1970s, improved the design and energy-efficiency of continuous-casting machines and the quality of metal produced. His work has been applied in steel plants in North America and abroad. In 1975, he collaborated on developing a process for roasting molybdenite to produce molybdenum oxide, used as an alloy for steel.

Brimacombe developed methods to enhance the productivity and lower the operating costs of Pierce-Smith convertors used worldwide to convert copper/iron sulphide to copper. Other achievements include improvements to reducing metal oxides from slags to recover metal values such as zinc, optimizing the operation of rotary kilns used globally for many purposes and developing remedial measures for direct-chill casting zinc, which improved cast quality.

Brimacombe’s dream of building a world-class research facility came true when the $21-million Advanced Materials and Process Engineering Laboratory opened at UBC in 1995. In 1997, he became the founding CEO of the Canada Foundation for Innovation, which funds Canadian science and engineering research. He also advanced industry knowledge by publishing research papers, lecturing in Canada and around the world and taking part in numerous industry associations.
Brimacombe received global recognition for his pioneering efforts and achievements, which, in addition to serving as an Officer of the Order of Canada and a Fellow of the Royal Society of Canada, included the Canada Gold Medal in Science and Engineering.