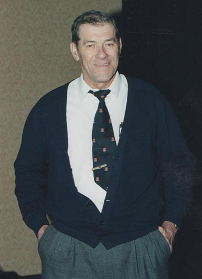 The island of Newfoundland inspired Harold (Hank) Williams during his fruitful years with the GSC and prolific career at Memorial University of Newfoundland and Labrador in St. John’s. A GSC mapping program on the island led to his seminal 1964 paper, The Appalachians in Northeastern Newfoundland: A Two-Sided Symmetrical System, which advanced the ground-breaking concept of plate tectonics for the first time. His landmark paper and 1967 geological compilation map of Newfoundland represented the first on-land syntheses of an orogenic belt in a tectonic framework.

Williams continued his work at Memorial to international acclaim. One of his greatest achievements was synthesizing the Appalachian mountain chain from Alabama to Newfoundland, which interpreted terrane divisions across the Atlantic. The implications for mineral exploration were exciting, and plate tectonics, once hotly debated, became widely accepted around the world.

Born and raised on the Rock, Williams was in the right place for his life’s work, with the island considered to have some of the best preserved tectonic elements than any other part of the Appalachian chain. He was a stellar student at Memorial University, where he obtained a diploma in engineering and a BSc in geology in 1956, followed by a MSc degree in 1958.

Williams joined the Appalachian section of the GSC after earning his PhD from the University of Toronto in 1961. He became known as an expert decoder of complex geology and as a meticulous mapmaker, with a prodigious ability to integrate and synthesize data. He was also a visionary thinker, as reflected in his influential paper published by the American Journal of Science in 1964. This much cited paper and his 1967 Newfoundland map were keystones to J. Tuzo Wilson’s recognition of the concept of an opening and closing proto-Atlantic (Iapetus) Ocean.

Williams returned to Memorial as an associate professor in 1968, and became a professor in 1971. In 1978, he produced a tectonic map of the entire North American Appalachian chain entitled “Tectonic lithofacies map of the Appalachian orogen.” It was a gargantuan feat and a best seller, with 10,000 copies sold worldwide.

The map provided a regional framework for geologists to focus their search for specific types of deposits, which led to discoveries such as the Duck Pond mine in central Newfoundland. It was also used to understand the relationships between various terranes in the Appalachians and their equivalents across the Atlantic Ocean.

Williams helped establish plate tectonics as a unifying theory for the drift of continents, the evolution of mountain belts and the formation of related mineral deposit types. He also inspired a generation of geologists and helped establish Memorial as a leader in earth science research.

Williams became one of the youngest fellows of the Royal Society of Canada in 1972, and received many other awards, including the Logan Medal of the Geological Association of Canada.