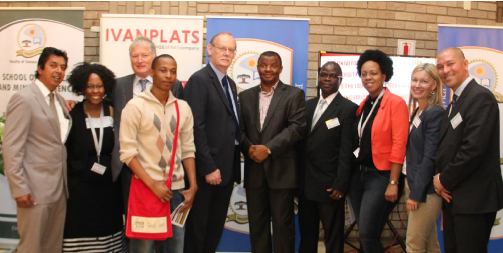 A principal goal of the five-year partnership, which is renewable for a further five years, is to develop and equip the University of Limpopo’s geology department to become a centre of excellence in geosciences. This will be achieved through measures that include:

• improved training and curriculum choices in economic geology and mineral exploration at the University of Limpopo;
• increased teaching and research capacities at the graduate student level;
• equipping laboratories;
• purchasing an outdoor vehicle and trailer for field excursions; and
• collaborating with Laurentian University to improve the University of Limpopo’s learning programmes.

Ivanplats also will provide in-service training opportunities for students from both universities and assist them in conducting research on the Northern Limb of the Bushveld Complex.

Ivanhoe Mines, through Ivanplats, has allocated a total of US$2.5 million to the Limpopo and Laurentian universities to fund their partnership during its initial five years. In addition to Ivanhoe’s investment, Laurentian University, of Sudbury, Ontario, has been awarded C$500,000 in scholarship funds for the project through the Queen Elizabeth II Graduate Scholarship in Science and Technology (QEII-GSST) Program.

Combined with a C$570,000 scholarship awarded to Laurentian by the International Development Research Corporation, these funds will create educational opportunities for 35 University of Limpopo students to study in Canada. Scholarship funding from the three sources will support under-graduate, Master of Science (MSc) and Doctor of Philosophy (PhD) positions at Laurentian and be focused on topics and research in mineral exploration and economic geology. The QEII-GSST scholarship will fund up to 15 graduate students and faculty from the University of Limpopo to pursue MSc and PhD studies at Laurentian’s Department of Earth Sciences.

The funds also will support a number of Laurentian’s graduate students to travel to Limpopo for three-to-four-month internships over the course of the first five years of the funding agreement with Ivanhoe. These advanced graduate students will teach and assist junior faculty at the University of Limpopo.

Robert Friedland, Executive Chairman and founder of Ivanhoe Mines, said the two universities are natural partners to work toward shared objectives. “We are confident that this initiative will help to facilitate the University of Limpopo’s development to become a centre for excellence in mining education and, in the process, help to realize the potential for economic growth that is inherent in South Africa’s heritage of abundant natural resources.

“Canada’s Sudbury Basin and South Africa’s Bushveld Complex are two of the most extraordinary geological features on Planet Earth and now host two of the largest mining districts on earth — as well as these two enterprising universities. Laurentian, with its Goodman School of Mines, has partnered with the domestic mining industry to provide some of the qualified people who are essential for industry operations. The University of Limpopo now can begin drawing on Laurentian’s vast experience to enhance its preparation of young South Africans with knowledge and skills that are required tickets to productive, rewarding careers in their modernizing mining industry,” Mr. Friedland said.

Dr. Patricia Makhesha, Managing Director of Ivanplats, said the Limpopo-Laurentian university partnership is a pillar of the Ivanplats Social and Labour Plan. “Part of our commitment to contributing to sustainable communities can be fulfilled through investments in deserving institutions with the capacity to fundamentally change the socio-economic landscape of the region in which we operate. The University of Limpopo is one such institution, a centre of learning and hope for young people who can qualify to participate directly in mining operations around their communities. By investing in this partnership, we are investing in providing skills that will help to enable those young people to become the future miners and leaders of tomorrow.”

Prof. Mahlo Mokgalong, Vice-Chancellor and Principal of the University of Limpopo, said the development of skills for the mining sector was crucial for the continued growth of the mining sector, a pillar of the South African economy. “This new collaboration will contribute significantly to the University of Limpopo’s offering to skills development in the mining sector. As a tertiary institution, we are determined to remain relevant to South Africa’s overall economic growth. This partnership with Laurentian University and Ivanplats helps to strengthen our academic programmes in ways which will allow young people to actively participate in the sustainable economic growth of Limpopo province.”

Prof Aifheli Gelebe, Director of School of Physical and Mineral Sciences at University of Limpopo said: “We realized some time ago that the lack of a comprehensive geology programme was a serious gap in the University of Limpopo curriculum. Our efforts to rectify this are now bearing fruit with the introduction of the new Geology programmes and will be greatly enhanced by the financial and academic support which comes with the newfound partnership between ourselves, Laurentian University and Ivanplats.”

“We are immensely proud to be a part of this multi-faceted educational agreement, which will help us fulfill our mission to advance global mining education. We look forward to working closely with our partners at the University of Limpopo and with Ivanhoe,” said Dr. Bruce Jago, Executive Director, Goodman School of Mines at Laurentian University. “This is an exciting international venture and we acknowledge the vision of Ivanplats, which is investing in future generations of geoscience professionals and educators in South Africa,” he added.

A portion of the funding will be used to hire a full-time academic tutor/program administrator to provide educational and administrative support for the successful completion of designated educational programs for Limpopo students, along with other support typically offered to all Laurentian international students.

“This is really a marvelous learning opportunity, both for our graduate students and for the students and faculty at the University of Limpopo’s Department of Geology,” said Matthew Leybourne, Associate Professor of Geochemistry, Mineral Exploration Research Centre, Department of Earth Sciences, Laurentian University.

Ivanhoe Mines is a TSX-listed company focused on the exploration and development of major copper, platinum, gold, nickel and zinc deposits on the African continent. Its Ivanplats subsidiary holds a long-term mining right covering the development of platinum, palladium, nickel, copper, gold and rhodium resources at its Platreef Project in South Africa’s Limpopo province.

For more information about the QEII-GSST Program, go to
https://osap.gov.on.ca/OSAPPortal/en/A-ZListofAid/PRDR008202.html

Ivanhoe Mines, with offices in Canada, the United Kingdom and South Africa is advancing and developing its three principal projects.
• The Kamoa copper discovery in a previously unknown extension of the Central African Copperbelt in the Democratic Republic of Congo. In March this year, members of the Ivanhoe Mines exploration team received the prestigious Thayer Lindsley Award from the Prospectors & Developers Association of Canada for the Kamoa copper discovery, recognized as 2014’s top international mineral discovery.
• A multi-phased mine development on its 64%-owned Platreef discovery of platinum, palladium, nickel, copper, gold and rhodium in South Africa’s Bushveld Complex. The South African beneficiaries of a broad-based, black economic empowerment structure have a 26% stake in the Platreef Project and the remaining 10% is owned by a Japanese consortium of ITOCHU Corporation; Japan Oil, Gas and Metals Corporation; ITC Platinum Development Ltd., an ITOCHU affiliate; and Japan Gas Corporation.
• The historic, high-grade Kipushi zinc, copper and germanium mine, also on the Copperbelt in the D.R. Congo’s Katanga province, which now is being drilled and upgraded by Ivanhoe following its acquisition of a majority interest in the mine in 2011. Kipushi was operated by previous owners between 1924 and 1993.

For more information about Ivanhoe Mines and Ivanplats, go to
www.ivanhoemines.com/s/platreef.asp

About the University of Limpopo

For more information on the University of Limpopo visit www.ul.ac.za

Laurentian University offers an outstanding university experience in English and French, with a comprehensive approach to Indigenous education. Laurentian University prepares students as agents of change and empowers them to create innovative responses to local and global challenges. Laurentian’s students benefit from small class sizes and exceptional post-graduation employment rates. With nine Canada Research Chairs and 19 research centres, Laurentian is a recognized leader in its specialized areas of research strength, which include mining innovation and exploration, stressed watershed systems, particle astrophysics and rural and northern children’s health. Laurentian University has secured over $100 million in research income in the past five years.