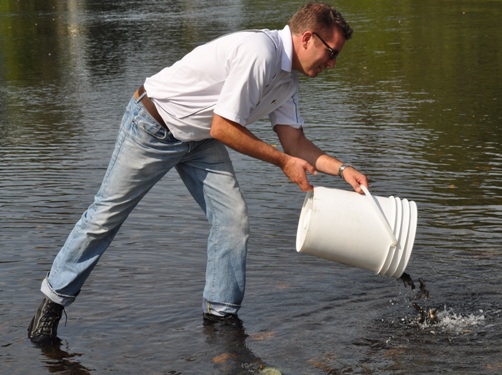 “These rainbow trout will be a great boost to the Onaping River’s fish population,” said Glen Watson, Superintendent, Reclamation & Decommissioning for Vale’s Ontario Operations. “This is our fifth fish release into the Onaping River since we began the fish stocking program three years ago and we’re already seeing great results.”

“It’s encouraging to see Vale continuing its active partnership in the ecological recovery of local watersheds through these efforts and the annual financial contributions the company makes to the City’s Regreening Program,” said Stephen Monet, Manager, Environmental Planning Initiatives, City of Greater Sudbury.

Vale works with the Ministry of Natural Resources to determine suitable donation sites for the fish it raises. Since 2012, approximately 11,000 fish have been released locally to the Onaping River and Ramsey Lake. The fish have been primarily walleye and rainbow trout along with some brook trout.