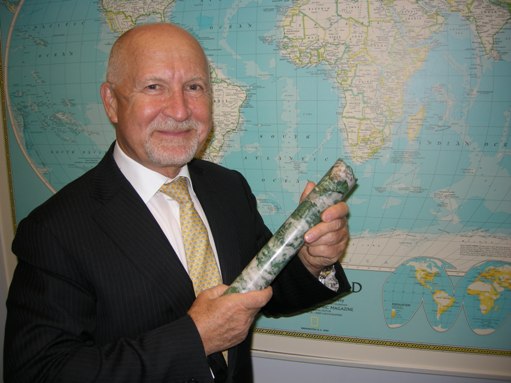 Stephen Roman, president-CEO of Harte Gold, could bring the first new gold mine in Hemlo into production in 30 years. (Photo by Stan Sudol)

If all goes according to plan, Harte Gold could soon be commissioning the first new mine in the Hemlo gold belt in 30 years. President and CEO Stephen Roman said the high-grade deposit at the company’s Sugar Zone property has open-ended potential that could lead to a new gold camp in northeastern Ontario.

“The project’s really ready to go now,” said Roman, whose Toronto-based junior has a permit in hand to take a massive 70,000-tonne bulk sample by the middle of this year.

The Sugar Zone Property is 60 kilometres east of the Hemlo area gold mines and about 25 km north of White River off the Trans-Canada Highway. Roman comes from good mining stock. His father, Stephen B. Roman, a Canadian Mining Hall of Famer, steered Denison Mines in Elliot Lake for 35 years. But the younger Stephen G. Roman is already a well-established name in Northern Ontario mining circles.

Among many accomplishments, he was a director with Gold Eagle Mines when it sold its high-grade Bruce Channel Discovery at Red Lake to Goldcorp in 2008 for a whopping $1.5 billion.

“We think we have well over a million ounces there, but the other upside of the property is the whole greenstone belt that we have claims over, which is 30 kilometres long. It could host another Hemlo, potentially.”

Roman said the market isn’t entirely enthused with narrow vein gold deposits, but Roman likes them for their high-grade potential.

“This one is particularly easy to mine. It vertically dips with an average width of two to four metres, which sometimes blow out to eight to 10 metres.”

Harte partnered with Ned Goodman’s Corona Gold through a Sugar Zone joint venture until 2012 when it acquired the controlling 51 per cent for $2.5 million.

Since Harte consolidated the project, Roman said they’ve refinanced the company, performed a ton of exploration work to expand the ore body, and doubled the estimated resource base.

With what they’ve drilled so far, Roman believes Sugar Zone has the potential to host a couple million ounces, “and the rest of the property who knows?”

The last six months have yielded a couple of new discoveries that will be tested along strike and at depth.

Roman said their nearby Wolf Zone and Footwall Zone appear to be parallel structures to the Sugar Zone and could contain more ounces.

Last summer the company raised close to $1 million in financing, brought renowned geologist Bob Middleton aboard – who was part of the original Hemlo discovery – and conducted geophysics which identified some fantastic looking targets.

Roman said the market got initially excited about the prospect of a new Hemlo mine, “but so far we haven’t hit it out of the park.” The company’s stock was hovering at six cents in early March.

With exploration financing hard to come by, Harte has adopted a pay-as-you-go philosophy.

“The idea really is to get the mine going and continue to exploring the property out of cash flow rather than continually coming back to the market,” said Roman.

The company has provincial approval to extract the bulk sample this summer.

To get at it, they’re driving a ramp since the mineralization comes right to surface. They expect to collar the portal in June.

“It’s much cheaper, much faster (than a shaft). If we collar in June, we will be in our bulk sample area within three or four months and potentially pouring gold by the end of this year or early 2016. It can move forward quite quickly.”

Roman said they’re evaluating bulk sample milling options with either Barrick at Hemlo, Richmont Mines near Wawa, or making concentrate on the site and selling it.

The company has an exploration agreement with the local Pic Mobert First Nation, who were involved in building a 20-kilometre access road off Highway 631, assisted in line cutting and with other jobs around the site.

“They’re really helpful, we have a good relationship and they would like to see the project advance quickly.”

The biggest frustration for Roman is waiting months for government permitting for the sample program.

He recalls at the Glimmer Mine, near Matheson – which ceased operation in 2001 after producing 211,000 ounces – that operation went from greenfield property to pouring the first gold bar within 10 months.

“This regime over the last few years has gotten very bureaucratic and come up with new things we need to do.”

Harte has another prospect in the pipeline with its Stoughton-Abitibi property, 50 km northeast of Kirkland Lake, which Roman calls a “bit of a sleeper.”

It’s located on the Destor-Porcupine Fault, about 10 km east of the St. Andrew Goldfields’ Holloway-Holt gold mine and mill.

Roman is excited that St. Andrew’s Smoke Deep Zone discovery runs onto their property. There’s some talk about a joint venture but his company wants to do a first round of drilling themselves “to see what we’ve got.”

“There could be a lot of action on that one within the next 12 months.”

For the original source of this article, click here: http://www.northernontariobusiness.com/Industry-News/mining/2015/04/Harte-Gold-has-eyes-on-2016-production.aspx