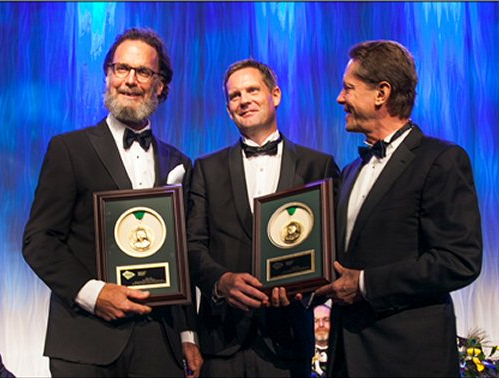 The Thayer Lindsley International Discovery Award, which is presented annually by the PDAC, recognizes an individual or a team of explorationists credited with a recent significant mineral discovery or series of discoveries anywhere in the world.

The award honours the memory of Thayer Lindsley, who was inducted into the Canadian Mining Hall of Fame in 1989 and was one of the most accomplished mine finders of the past century. Throughout Mr. Lindsley’s long and extraordinary career, he either founded or was involved in the development of many famous Canadian mining companies, including Falconbridge, Sherritt Gordon, Frobisher, Giant Yellowknife, Canadian Malartic and United Keno Hill. It is estimated that his geological and creative genius touched the fortunes of more than 185 mining companies throughout the world.

“The PDAC’s recognition of the efforts of key members of the Ivanhoe exploration team in the extraordinary Kamoa discovery is an honour and a proud achievement for our company,” said Mr. Friedland.

“Kamoa, which now ranks as Africa’s largest high-grade copper discovery and is the world’s largest undeveloped high-grade copper discovery, was formed more than 500 million years ago and was subsequently hidden under a thin layer of Kalahari sand for an estimated tens of millions of years. The discovery, first announced in April 2009, was the collaborative effort of a global team of exceptionally talented geologists, mine finders and financiers – creative thinkers and doers – with a deep esteem for science, technology and grass-roots exploration.

“The largest major copper discovery in the DRC since the early 1900s, Kamoa represents the discovery of a previously unrecognized and richly endowed district within the Central African Copperbelt – geologically distinct, yet geographically next door to the well-known Kolwezi deposits. We have a strong belief that the Copperbelt in DRC holds the potential for additional world-scale discoveries,” Mr. Friedland added.

Attending the PDAC awards dinner from the DRC were Felix Mupande, Director General of Cadastre Miniere (Mines Registry), Victor Kasongo, who was the Deputy Minister of Mines in the DRC when Kamoa was discovered, Guy Nzuru Solo, Ivanhoe’s General Manager, DRC, and Innocent Mushobekwa, an Ivanhoe geologist.

This is the second time in the 12-year history of the Thayer Lindsley Award that it has been awarded to geologists from a Canadian company affiliated with Ivanhoe Capital Corporation, which represents some of Mr. Friedland’s principal business interests in the international resources sector. In 2004, the inaugural year for the award, three senior geologists with the original Ivanhoe Mines (now Turquoise Hill Resources) won the award for their work that led to the discovery of the Hugo Dummett copper-gold deposit that is slated to begin production as the second phase of the Oyu Tolgoi Mine in Mongolia.

In 1996, Mr. Friedland won the PDAC’s Viola MacMillan Developer’s Award for his work in establishing and financing companies engaged in mineral exploration and development around the world – in part a recognition of the key role he played as Co-Chairman of Diamond Fields Resources in helping to transform a small outcrop at Voisey’s Bay, Labrador, into one of Canada’s most significant mineral discoveries and negotiating the sale that eventually saw the deposit developed into one of the world’s major nickel mines. (Also in 1996, Albert Chislett and Chris Verbiski, the prospectors who made the landmark discovery at Voisey’s Bay while exploring under an agreement with Diamond Fields Resources, shared the PDAC’s Bill Dennis Award for Prospector of the Year.)

The Kamoa discovery was made by Ivanplats, which subsequently adopted the Ivanhoe Mines name in 2013.

In August 2012, the DRC government granted mining licences to Ivanhoe Mines for the Kamoa Project that cover a total of 400 square kilometres. The licences are valid for 30 years and can be renewed at 15-year intervals. Mine development work at Kamoa began in July 2014 with construction of a box cut for the decline ramps that will provide underground access to the initial high-grade mining area.

The scientific and technical information in this release has been reviewed and approved by Stephen Torr, P.Geo., Ivanhoe Mines’ Vice President, Project Geology and Evaluation; a Qualified Person under the terms of National Instrument 43-101. Mr. Torr has verified the technical data disclosed in this news release. For detailed information about assay methods and data verification measures used to support the scientific and technical information, please refer to the current technical report on the Kamoa Copper Project on the SEDAR profile of Ivanhoe Mines at www.sedar.com.

Ivanhoe Mines is advancing and developing its three principal projects:

The Kamoa copper discovery in a previously unknown extension of the Central African Copperbelt in the DRC’s Katanga Province.

The Platreef Discovery of platinum, palladium, nickel, copper, gold and rhodium on the Northern Limb of the Bushveld Complex in South Africa.

The historic, high-grade Kipushi zinc-copper mine, also on the Copperbelt in the DRC.
CONTACT INFORMATION